Michel Prud'homme, retired from International Fertilizer Associate (IFA), gave the global nutrient supply outlook at the 2019 Fertilizer Outlook and Technology Conference held in Savannah, Georgia, in mid-November. While one would expect many positives with the industry growing, there are some potential issues in the world fertilizer supply.

Because of increasing international demand for nutrients, world fertilizer capacity will have grown by 66% between 1990 and 2022, he said. Specifically, during that same period, nitrogen increases 56%, phosphoric acid is up 90% and potash rises 78%.

Prud'homme said, from 2000 to 2017, nitrogen saw large increases in production from China, West Asia, and Eastern Europe and Central Asia (EECA). Then, from 2015 to 2022, the world supply forecast is for significant reductions in Chinese production, which is being offset slightly by increased production in the U.S., Russia, Africa and India.

Other countries such as Africa, EECA and West Asia have potential growth for future nitrogen fertilizer capacity, he added.

What is going on in China and India with urea capacity is the opposite ends of the spectrum, he noted.

China has urea capacity dropping by 2.7 mmt from 2018 capacity, to 65 mmt in 2021, due to facilities closing in the country because of increasing environmental regulations. This correction will result in 16 mmt less in production in 2021 than what it was in 2014.

India, meanwhile, is set to see urea capacity surging over the next five years. Five new urea plants in the nation will increase India urea production by 6.4 mmt, to 31.2 mmt in 2021, he said.

Phosphoric acid saw increased supply from 2001 to 2016 from sustained capacity increases in China, he said. Also, massive capacity additions were made in Africa and West Asia.

The top three phosphate rock reserves (U.S., China and Morocco) produce 63% of the global rock capacity. Phosphoric acid capacity is expected to increase from 60 mmt in 2018 to 61 mmt in 2021.

The world potash capacity supply is expected to increase from 95 mmt to 99 mmt in 2021. Production rationalization -- decreases -- are expected in the European Union, while increases are expected in Russia and Belarus.

The first factor is if a region has the natural resources to produce fertilizer. Access to feedstock supply, such as natural gas, is necessary, as is a good economic and financial situation, he said.

The second driver is regulations. This could be either environmental regulations and/or product safety.

The third driver is policies by the regions for fertilizer supply. Trade policy, export taxes and domestic investment policies are all included in this driver.

One specific challenge the global fertilizer industry faces is to supply the market but not to get into an oversupply situation. Basic economics says too much supply will lessen the demand of a product, and fertilizer is no different, he said.

Global fertilizer operating rates from 2011 to 2015 declined in all segments until about 2014, he said. Potash had rate recovery starting in 2014, while urea and phosphoric acid saw rate recovery by 2015.

Then, during the 2015 to 2018 time period, lower operating rates were again seen in all nutrients.

Lower global ammonia and urea capacities were seen in 2017 to 2019. Phosphoric acid and potash capacities saw capacity rising faster than production from 2015 to 2016.

In addition, low operating rates on capacity and effective capacity were seen in the potash segment. 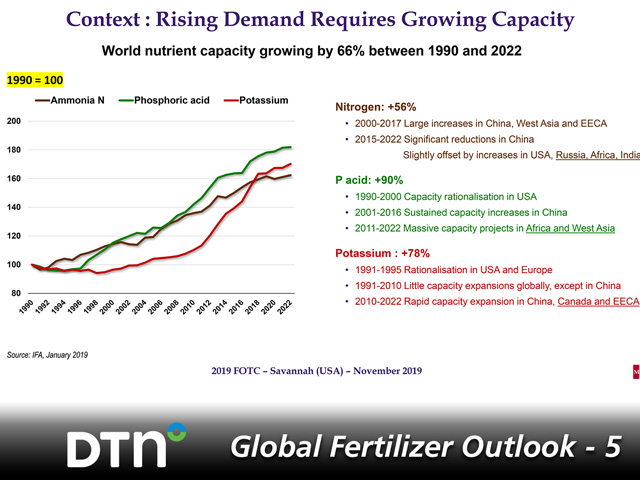