OMAHA (DTN) -- In the wake of flooding that has inundated the Midwest, people offer different perspectives calling for more investment in flood control infrastructure as recovery begins along the Missouri River and in much of the Mississippi River watershed.

Some point to the need for upgraded flood control to improve climate resiliency, while others see a need to refocus the U.S. Army Corps of Engineers more on flood control and less on environmental rehabilitation.

Michael Walsh, a retired Army Corps of Engineers major general, said in an interview with DTN he thinks the center of the country is losing on critical infrastructure investment, partly because of a stubbornness to address climate resiliency. Meanwhile, coastal communities respond to disasters such as hurricanes to increase their resiliency to sea-level rise. That typically comes by setting up a long-term federal study or task force to examine new infrastructure needs.

"Never waste a good emergency." Walsh said. "Certainly the flooding this year has meant the high water is going to last longer than it has in the past. I think the center of our country needs to have a massive plan at the watershed scale that most folks just don't recognize."

Walsh was in the Corps of Engineers for 36 years and commanded the Mississippi Valley Division during the 2011 flood. Walsh made the difficult decision during that flood to blow up Birds Point levee in southeast Missouri, which saved Cairo, Illinois, from more extreme flooding but also flooded more than 100,000 acres of Missouri crops.

"The coastal areas are putting together plans that spend hundreds of millions or billions of dollars. If the middle part of the country doesn't pick up the pace, we're going to be in trouble. So we have to figure out how to use this emergency to create the political will, not to solve the five-year problem, but how do we solve the 100-year problem," Walsh said.

The latest National Climate Assessment released last fall highlights that the Midwest will continue to be more susceptible to increased rainfall and flooding events, especially in winter and spring. And yet, the same models that show 9% more spring precipitation as midcentury approaches also show declining summer precipitation by an average of 8% in portions of the Midwest. The climate assessment highlights, "Water infrastructure for flood control, navigation, and other purposes is susceptible to climate change impacts and other forces, because the designs are based upon historical patterns of precipitation and streamflow, which are no longer appropriate guides."

Pointing to Missouri River flooding, Walsh noted, "The challenge that you have on the Missouri is that there is no infrastructure master plan. So when something like this happens, people say, 'OK, how do we fix it?' And there is no plan there, so you fix it as it was."

Cathy Crain, mayor of Hamburg, Iowa, doesn't have the luxury to examine the root causes that led her town to flood. Hundreds of residents lost their homes and Hamburg went months this spring without potable water after flooding hit in mid-March.

"Things have changed in the world, and now we have to fight the Missouri River that's five miles away that we didn't have to fight from 1952 to 2011," Crain said.

Hamburg residents are bitter because the town built an emergency levee in 2011 that held off floodwaters during the height of that flooding. The town tried to keep that levee but Corps officials said it didn't meet federal regulations on issues such as compaction per square inch. Hamburg didn't have the funding to improve the levee to federal specifications, so the town had to take down it down. Recovery will cost significantly more for local residents.

"It wasn't a test drive. It was the real deal, and it would have worked. And we think it would have worked this time," Crain said. "We had to tear it down because it did not meet all of the requirements of Congress' perfection. We are about performance, not perfection and that's what hurt this town."

Some politics have changed in the 2019 floods. The governors of Iowa, Nebraska, Missouri and Kansas have called for more say in how the Corps of Engineers manages the Missouri River. It's unclear though, what the sustaining power those early meetings will translate into.

In Southwest Iowa, the state Department of Transportation has responded to a critical pinch point on the river that led to significant flooding in both 2011 and this year. Earlier this month, the Iowa Department of Transportation quickly awarded a $34.3 million project to build new bridges from Sidney, Iowa, to Nebraska City, Nebraska. The levee-to-levee distance at that point is one of the most narrow along that area of the Missouri River. The project will get rid of a u-shaped setback levee that creates a choke point for the river during floods. The two overflow bridges will have space between pillars for water to flow under during floods. That will relieve pressure on the levee system upstream. The completion date is set for early March 2020 to get it open before next spring's thaw.

"This is a project that would normally take four to six years and we went through the entire process in just a few months," said Scott Schram, a district engineer for Iowa DOT. "It's going to be a fast-moving project."

The 2019 floods were highlighted last week at a House Transportation and Infrastructure Subcommittee on Water Resources and the Environment hearing. The subcommittee is in the early stages of reauthorizing the next Water Resources Development Act. Rep. Sam Graves, R-Mo., said the anticipated costs of this year's flooding will be several billion dollars. Thousands of river bottom acres in his district have been underwater for more than four months. Graves said he thinks the Corps has to "balance too many priorities" and noted funding for annual levee maintenance -- before the flooding -- was only $13 million while spending $30.7 million was appropriated for wildlife and habitat reclamation.

Army Corps of Engineers officials said they were dealing with record discharges on a number of rivers this spring due largely to heavy rainfall events. Floodwaters remain too high for the Army Corps of Engineers to provide a full assessment of damages to levees on the Missouri and Mississippi rivers, but the known costs right now for levee repairs have reached $1.9 billion just for levee damage between Omaha and St. Louis. The Corps has counted 160 levee breaches on the Missouri River. Some breaches gouged 50- to 70-foot deep holes stretching a quarter-mile in length. New levees may have to be set back from such damage.

"We can start work on some areas pretty soon, but doggone it, the rivers are still just so high there's not a lot of work we're going to be able to do," said Assistant Secretary of the Army for Civil Works R.D. James.

Major General Scott Spellmon, the Corps' deputy commander for Civil and Emergency Operations, told lawmakers it was too early to determine damages on the Mississippi River south of St. Louis because the flood events continue. "It's still raining," he said.

The costs of this year's flood will continue to rise. James also said he thinks another supplemental funding package will be needed beyond the $19 billion disaster package passed last month. "If I were a betting man, I would bet we will need more money to attack the damage that's been done," James said.

When asked about climate change as a reason for more intense flooding, James said he's not a scientist but the Corps is using climate models and engineers recognize they can't rely on historical data to forecast future flood risks. "We're making every effort as far as I am concerned, as far as I know, to build sustainable infrastructure," James said.

Spellmon told lawmakers the Midwest is seeing changing precipitation patterns in both number of intense rain events and overall volumes of rainfall.

Tom Waters, a Missouri farmer and chairman of the Missouri Levee and Drainage District Association, testified the current Missouri River flooding is not over because the reservoirs are full in North and South Dakota and Montana. Reservoirs in Kansas and Missouri are full as well. All three basins have to release water before next year.

"So that is going to keep the river high. We know it is going to be high above flood stage throughout the summer, into the fall and probably into the winter."

The flood risk will remain beyond 2019 because Waters noted the Corps is projecting it will take two years or more to fix the levees. Waters said he thinks it will more likely be three to five years. Waters also said roughly one-third of crops in Missouri are produced in the 100-year floodplain. "This thing is going to drag on a long time and it just trickles through the economy of the state, not just the state, but when you put Kansas, Iowa and Nebraska in there -- the whole Midwest -- it really will affect food production food and trickle through the United States economy," Waters said. "I really believe that."

On the $1.9 billion in preliminary estimates for repairs, "That number is going to continue to increase," Waters said.

Waters also stressed that flood control needs to be the top priority for the Corps. He believes some of the restoration projects for endangered birds or fish in the Missouri River have damaged the ability to defend against floods.

"We have to get back to flood control as the top priority," Waters said. He added the situation has reached a tipping point. "Missouri and Iowa farmland was not meant to be the Fish and Wildlife Service laboratory, and Midwestern farmers no longer wish to be their guinea pigs." 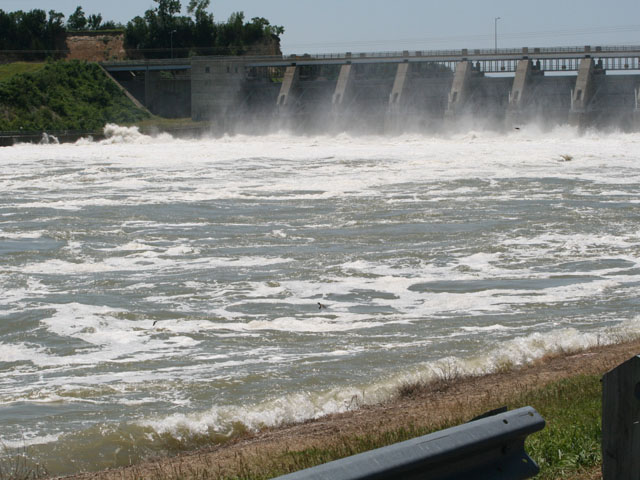