WATSON, Mo. (DTN) -- Missouri farmers and officials see greater risks for more flooding as spring continues, but they also want to see some long-term systemic changes in flood control on the Missouri River.

Tom Waters, chairman of the Missouri Levee and Drainage District Association, was among those who met Thursday with Bill Northey, USDA's undersecretary for farm production and conservation.

Waters highlighted concern about snowpack in the upper Missouri River basin, along with flooding in South Dakota in the James and Big Sioux rivers. He rattled off the fact fields throughout the Midwest are already saturated. Along with that, there are fewer river gauges along tributaries to the Missouri River to monitor spring rises.

"The possibility of all of those coming together at once is very real and it's very dangerous," Waters said.

Northey met with farmers in northwest Missouri, then traveled to Hamburg, Iowa, on Thursday to see the destruction there and hear from farmers there as well. On Friday, Northey and Sen. Charles Grassley, R-Iowa, held a meeting with farmers and residents in Mills County, Iowa.

In both states, farmers in flooded bottom lands recognized the likely futility of getting a crop planted in 2019 and were already turning their attention to 2020. Crop insurance, for instance, would be significantly more expensive next year if the levees aren't rebuilt.

"Crop insurance is going to be necessary to plant a crop next year," Chris Klenklen, deputy director of the Missouri Department of Agriculture. "That's going to be hard to do if you don't have the holes filled."

The longer-term issue, though, is that the Missouri River and its tributaries have now brought two historic floods in eight years.

"We built this system and it's not working," Klenklen said. "We've had two huge floods eight years apart. The river system is not working properly. Why is it not working?"

Gavins Point Dam, the last major dam on the Upper Missouri River, was temporarily down to 20,000-cubic-feet-per-second releases, but is now at 36,000 cfs and will raise the level to 43,000 cfs by the middle of next week.

On the Lower Missouri River, there are some levees destroyed by flooding in 2015 that still aren't rebuilt. Funding and Corps of Engineers priorities matter, Waters said. For instance, some levee repairs on the Missouri River were moved lower on the Corps' priority list after larger disasters such as Hurricane Sandy.

"We've got to do something better to protect our agricultural lands," Waters said. "It's the agricultural areas that are seeing the most expense and recovery."

Blake Hurst, president of the Missouri Farm Bureau, said he would love to see more protection on the main stem of the Missouri River, but he recognizes the political lift that would take.

"I see something like this and maybe it becomes more feasible," Hurst said.

In Hamburg, Iowa, as rains fell on already soaked ground, Northey, state officials and a handful of farmers stood under a garage canopy to talk about the financial risks facing farmers.

Mike Stenzel said he and his son, Michael, got their equipment, fertilizer, chemicals and seed they had already bought for spring planting out of danger. But they have 50,000 bushels of soybeans and 140,000 bushels of corn that was stored in bins that is underwater. Mike Stenzel figured his potential grain losses total at least $905,000. The soybeans were seed beans already sold to a company, so the Stenzels may have to come up with money to pay back the seed company.

"The sad part about it is we were just kind of recovering from 2011 financially," Mike Stenzel said.

The family had flood insurance on its buildings and some of its grain bins, but the grain itself wasn't covered.

Farmers are leaning on Congress to complete a new disaster aid package priced at about $13.5 billion that includes funding for multiple disasters last year, as well as much as $3 billion now for Midwest farmers and ranchers.

"If we don't get that, we're done, plain and simple," said Michael Stenzel. He said his father has farmed that ground his whole life and it would just be too costly to try to buy farm ground in the hills outside of the flood plain. "We'll have to liquidate because we can't take that big of a hit and stay afloat."

Michael Stenzel added that his neighbors also have millions of dollars in capital investments, as well as lost grain.

That federal aid plan, as Grassley highlighted Friday, will have another procedural vote on Monday because Senate Democrats want more funding for Puerto Rico, which continues to struggle from a 2017 hurricane. Republicans, including President Donald Trump, don't want to send more aid to the island other than food assistance.

Before a packed crowd of farmers and residents in Malvern, Iowa, on Friday, Grassley said the disaster bill would be open-ended to plug in the disaster losses from the flood. He also indicated it is not over.

"Before this spring is over, I suspect every state from here to the Gulf of Mexico is going to be affected," Grassley said.

The senator also chastised the Corps for what he said was the failure to learn from the 2011 flood.

"We believe that you ought to learn from history," he said.

Leaving Friday's meeting, Grassley told reporters it would be a lot easier if Agriculture Secretary Sonny Perdue declared an indemnity program for lost grain in bins than getting a bill through Congress to pay farmers.

Northey recognized the problems with the lack of an indemnity program for grain losses. Still, he told farmers to go to their local Farm Service Agency offices and talk to them about what they might need. The biggest potential program for initial cleanup is the Emergency Conservation Program, which can be used to remove debris, move and repair fences, and deal with sand and erosion.

"Go into your county offices and have those conversations," Northey said. "Don't expect them to pay all of the costs it's going to take with the challenges of this situation. We're able to help a little, to have some cost-share to help soften those huge expenses."

Livestock producers, particularly in Nebraska, will be able to tap the Livestock Indemnity Program to help offset some of the losses from cattle, swine or other livestock losses they experienced from the floods, as well as from the extreme cold leading up to the floods.

Mike Naig, Iowa's secretary of agriculture, stressed the need to address the gaps in disaster funds, especially when it comes to indemnity for grain losses. "These are devastating economic losses for our farmers with no coverage on that grain," Naig said. 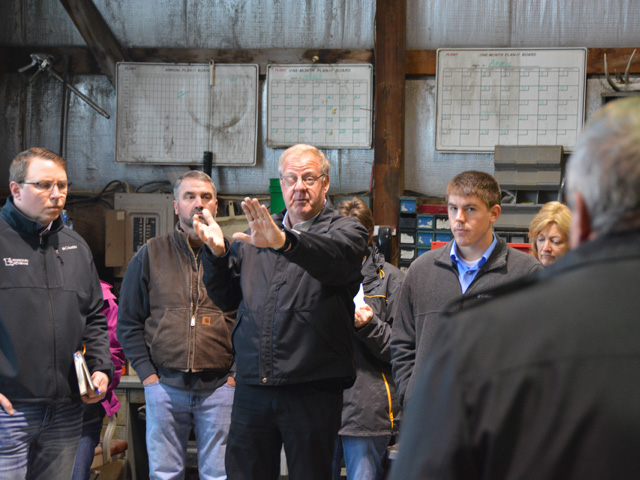