OMAHA (DTN) -- The White House on Monday made it clear that a railroad shutdown "is unacceptable" to President Joe Biden as agricultural groups and other business lobbies continue to clamor for Congress to step in.

"As the president has said from the beginning, a shutdown is unacceptable because of the harm it would inflict on jobs, families, farms, businesses, and communities across the country," Jean-Pierre said Monday.

Jean-Pierre noted a majority of the unions voted to ratify the labor agreement -- though the four unions representing the bulk of workers voted to reject it. Jean-Pierre said the best option is still for the unions and railroads to resolve differences through negotiations.

"And that's what we're going to continue to call for. We think that they should move forward in good faith and get this resolved," she said.

The National Grain & Feed Association on Monday called on its members to contact their senators and representatives in Congress to act. "Congressional action will be necessary if they fail to reach an agreement before the 'cooling off' period ends, which is currently scheduled for Dec. 5 for one union and Dec. 9 for the three other unions that voted not to ratify."

NGFA pointed to the challenges already facing other modes of grain movement, including the low water levels on the Mississippi River.

"Any additional disruption of rail service would immediately impact the nation's food and agriculture and broader supply chains," NGFA stated. "The risk in both domestic and international markets is real. Congress must take bipartisan action to prevent a strike from occurring."

Mike Steenhoek, executive director of the Soy Transportation Coalition, also pointed to the river issues. According to USDA, railroads transport 29% of soybeans, 33% of corn, and 60% of wheat to export terminals, Steenhoek noted.

"Given the well-documented low-water conditions along the inland waterway system, having this big question mark regarding rail service could not come at a worse time," Steenhoek wrote in an update. "Rail service already has not been the lifeline it normally should be, but the potential for a strike or lockout is clearly causing much agitation in agriculture and the broader economy."

As much as 30% of all packaged food also moves by railroad, Tom Madrecki, vice president of supply chain for the Consumer Brands Association, told the Associated Press. That includes products such as cereal, cooking oils and beer.

Beyond agriculture, a rail strike would paralyze coal shipments as winter arrives. Commuter transportation would halt in the Northeast and could affect drinking supplies for communities that rely on rail shipments of chlorine. Then there is the risk of intermodal gridlock hitting in the midst of Christmas shopping season.

The Association of American Railroads, which represents the major railroad companies, stated, "While railroads remain committed to reaching agreements with the remaining unions, the timeline for those to occur is short. Congress has historically intervened to prevent rail system disruptions."

As DTN Cash Grains Analyst Mary Kennedy has documented, the brokered deal from September includes the agreement struck by the Presidential Emergency Board (PEB) in August. That agreement includes a 24% pay increase from 2020-24 as well as a $5,000 bonus. The key issue with the unions, however, is the lack of paid sick days in the deal. The unions want 15 paid sick days, but the PEB recommended just one day.

While agricultural groups and business leaders want Congress to step in, Democrats who still control the House and maintain control of the Senate are reluctant to go against the unions. Sen. Bernie Sanders, I-Vermont, one of the most liberal senators, late Monday night tweeted his support for the unions' position.

"It is beyond belief that in the year 2022 rail workers in America have zero guaranteed paid sick days. Zero. The rail industry, which made a record-breaking $20 billion in profits last year, must come to the table and negotiate a contract which treats their workers with respect," Sanders wrote.

Politico reported Monday that House Republicans have drafted legislation that would impose the PEB recommendations on the unions. Still, the GOP won't control the House in December. Democrats want to see the railroads and unions make a deal that would give workers their paid sick leave.

"I'm hoping the railroads will get reasonable; this is the 21st Century and to have skilled workers being denied sick leave, even unpaid sick leave, is unconscionable," Politico quoted House Transportation Committee Chairman Peter DeFazio, D-Ore. Freight rail companies "are watching their record profits, 'Oh my God, if we give people paid sick leave our stock might drop by a dollar.' Give me a break," he said.

In the Senate, some GOP senators also want to try to force a vote that would match the PEB agreement. Senate Majority Leader Chuck Schumer, D-N.Y., has not commented on the risks of a railroad strike or whether he would allow a floor vote on a bill to stop it. 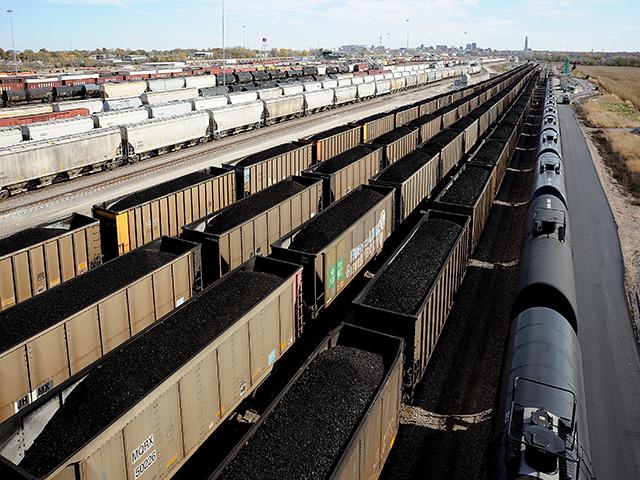