OMAHA (DTN) -- The average retail price of most fertilizers continues to trend downward, according to retail fertilizer prices tracked by DTN for the end of October and early November 2022.

Only one fertilizer was up or down significantly, which was 10-34-0. DTN designates a significant move as anything 5% or more.

The remaining three fertilizers were slightly more expensive than at this time last year. Anhydrous had an average price of $1,426/ton, UAN28 $583/ton and UAN32 $680/ton.

The Fertilizer Institute (TFI) send a letter to Congressional leadership on Monday urging Congress to act to prevent a potential rail strike, which would result in fertilizer and fertilizer inputs being embargoed roughly five days prior to the strike, according to a TFI press release.

"We warned that the U.S. couldn't afford a rail strike in September, and this still remains true today," TFI President and CEO Corey Rosenbusch. "The movement of fertilizer is greatly dependent on rail throughout the year. A rail strike would be devastating to fertilizer manufacturing and to fertilizer distribution to the farmers, who need it to grow the food on which the world depends." You can read the entire letter here: https://www.thefencepost.com/….

The situation is compounded by continuing logistical and supply chain disruptions that remain unsolved.

"Congress must act and they must act immediately upon its return on Nov. 14," he said. "A rail stoppage is going to exacerbate inflation and hit U.S. consumers right before the holidays. Congress can avert this disaster, and they must do so quickly."

For more background on the potential rail strike and its impact beyond the fertilizer market, please read "Rail Shippers Fear a Strike is Near" here: https://www.dtnpf.com/….

Despite lower prices in recent months, all fertilizers continue to higher in price than one year earlier.

European fertilizer manufacturers are restarting fertilizer production on the continent due to the recent sharp drop in natural gas prices, according to Dow Jones. You can read it here: https://www.dtnpf.com/…. 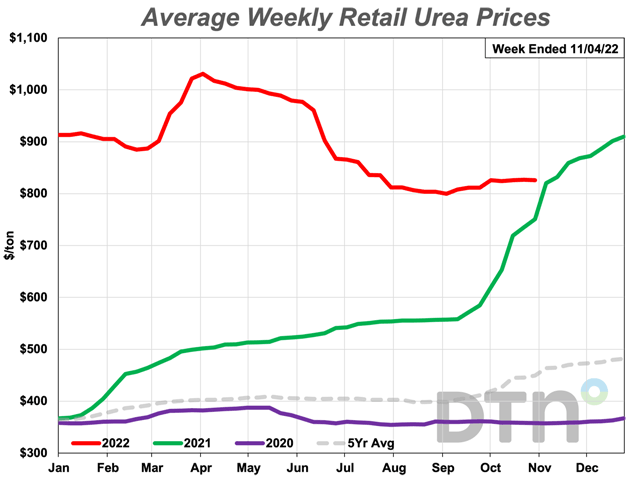