OMAHA (DTN) -- Retail fertilizer prices continued their lower trend as five of the eight major products are cheaper compared to last month, according to locations tracked by DTN for the fourth week of October 2022.

Similar to last week, the only fertilizer up or down significantly was 10-34-0. DTN designates a significant move as anything 5% or more.

The remaining three fertilizers were slightly more expensive looking back to last month. Urea had an average price of $827/ton, anhydrous $1,422/ton and UAN32 $678/ton.

European fertilizer manufacturers are restarting fertilizer production on the continent due to the recent sharp fall in natural gas prices, according to Dow Jones.

Yara International ASA, one of the world's largest fertilizer companies, announced recently it was now operating at 65% of its European ammonia capacity. This came after the company cut output to just over one-third of its total capacity for much of the second half of 2022.

Commodity research firm CRU International Ltd. said Yara's moves are in line with other European fertilizer producers in recent weeks. European fertilizer output is now at about 63% of total capacity compared to 37% at the beginning of October, according to CRU.

Gas prices have fallen sharply in recent weeks due in part to milder temperatures and fuller-than-average gas storage facilities. Fertilizer manufacturers could not make the higher natural gas prices work, so they just stopped making fertilizer until recent weeks.

While some production is coming back online, all is not well in fertilizer production. Natural gas prices are still much higher than before the war in Ukraine, which threatens to keep a lid on production for some time to come, according to Chris Lawson, head of fertilizers at CRU.

"We're back to (price) levels seen at the same time last year, but they're still well above historical norms," Lawson said.

A new fertilizer facility is being built near Stanley, Wisconsin. You can read it here: https://www.dtnpf.com/…. 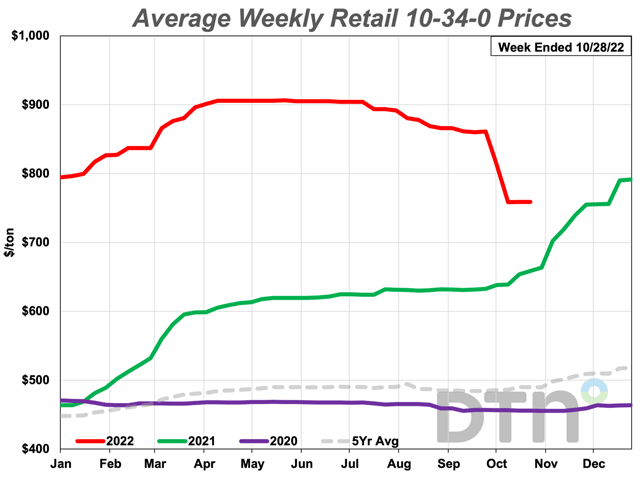