WASHINGTON (DTN) -- Cynthia Rosenzweig, the senior research scientist at the NASA Goddard Institute for Space Studies who first wrote about the impact on climate change on agriculture in 1985, was announced Thursday as the 2022 World Food Prize laureate in a ceremony at the State Department.

Rosenzweig's work focused on how climate change affects food production in different parts of the world. Among her accomplishments, Rosenzweig pioneered a project for climate modelers to forecast how changing growing conditions will affect food production.

"Dr. Rosenzweig has advocated that climate change is one of the most significant, pervasive and complex challenges facing the planet's food systems," the World Food Prize Foundation said in a news release.

"Beginning in the early 1980s, when scientists were asking, 'What's causing climate change?' Dr. Rosenzweig was asking, 'What will it mean for food?'"

Rosenzweig completed the first projections of how climate change will affect food production in North America in 1985 and globally in 1994, and she was one of the first scientists to document that climate change was already affecting food production and cultivation. "Her early work was an important methodological breakthrough in the beginnings of climate change impact assessment and established the foundations for current work in this field," the World Food Prize Foundation stated.

In a speech, World Food Prize Foundation President Barbara Stinson said Rosenzweig had been chosen to receive the $250,000 prize for her pioneering work in modeling the impact of climate change on food production worldwide and for leading the global scientific collaboration that produced the methodology and data used by decision-makers around the world.

Stinson noted that Rosenzweig's achievements include founding the Agricultural Model Intercomparison and Improvement Project (AgMIP), a globally integrated network of climate and food system modelers started in 2010. AgMIP is dedicated to advancing methods for improving predictions of the future performance of agricultural and food systems in the face of climate change, providing the evidence base for effective food system transformation. Rosenzweig's leadership of AgMIP has directly helped decision-makers in more than 90 countries enhance their resilience to climate change, and her work has shaped our understanding of the relationship between food systems and climate change, Stinson added. The AgMIP is considered "the gold standard" for agriculture and climate modeling research.

The foundation also noted that Rosenzweig "has participated as a lead or coordinating lead author on three global assessments of the Intergovernmental Panel on Climate Change."

"Her work contributed to the scientific foundation of the United Nations Framework Convention on Climate Change (UNFCCC), the process which led up to the Paris Agreement on Climate Change in 2015. Her research also supports work in many countries to develop National Adaptation Plans and National Determined Contributions for the UNFCCC."

"I am honored to receive the World Food Prize this year, as food systems are emerging at the forefront of climate change action," Rosenzweig said in a news release.

"Climate change cannot be restrained without attention to food system emissions, and food security for all cannot be provided without resilience to increasing climate extremes. I salute the modelers around the world in the Agricultural Model Intercomparison and Improvement Project for their tireless work helping countries to achieve food security both now and in the future under changing climate conditions. As we move into a crucial decade of action on climate change, food needs to be 'at the table.'"

The foundation said Rosenzweig developed her interest in agriculture after she and her husband, Arthur, moved to Tuscany, Italy, where they started a farm, growing vegetables and fruits and raising chickens, goats and pigs.

When they returned to New York in 1972, Rosenzweig studied to earn a two-year degree in agriculture from a technical college on Long Island. She and her husband and friends then started Blue Heron Farm in Thompson Ridge, New York, where they grew sweet corn, Indian corn and cucumbers for pickling.

A native of New York, Rosenzweig also served as co-chair of the New York City Panel on Climate Change, and following Hurricane Sandy in 2012, she led the team that developed new climate projections that were the basis for the city's $20 billion rebuilding and resiliency implementation plan.

Secretary of State Antony Blinken was scheduled to host the World Food Prize Laureate Announcement, but he tested positive for COVID-19 and was not present.

Undersecretary of State for Economic Growth, Energy and the Environment Jose Fernandez delivered remarks in the absence of Blinken. Fernandez noted that climate change has had a negative effect on food production and that Russia's invasion of Ukraine has been felt in food insecurity around the world. He also noted that Blinken will chair meetings on global food insecurity at the United Nations on May 18 and 19.

Cary Fowler, appointed this week as Blinken's special envoy for global food security, noted the event was his first official engagement. Fowler said agriculture is facing "historically unprecedented" challenges, but that the world looks toward World Food Prize laureates for solutions and hope.

Agriculture Secretary Tom Vilsack was not present but sent a video congratulating Rosenzweig.

"Since the 1980s, her work has been instrumental in building resilience in the U.S. agriculture sector," Vilsack said. "Her creation of AgMIP to further improve vital agricultural data and projections for regions around the world is truly essential to establishing global food security in the era of climate change."

Bill Nelson, a former Democratic senator from Florida who is the administrator of the National Aeronautics and Space Administration, was present in the audience. In a news release, Nelson said, "I'm proud of Dr. Rosenzweig's dedication to improving agricultural models and capabilities that improve life around the globe."

"On behalf of the entire NASA community, I want to congratulate her on this accomplishment," Nelson said.

"As our climate changes, NASA will continue working to understand the impact of more intense weather events that increasingly strain the worldwide food supply. We'll continue to support scientists like Dr. Rosenzweig as we plan for the future in a changing climate."

DTN reported on NASA spotlighting some of its work on agriculture earlier this year. Read the story, "NASA Takes Off at Commodity Classic," here: https://www.dtnpf.com/…. 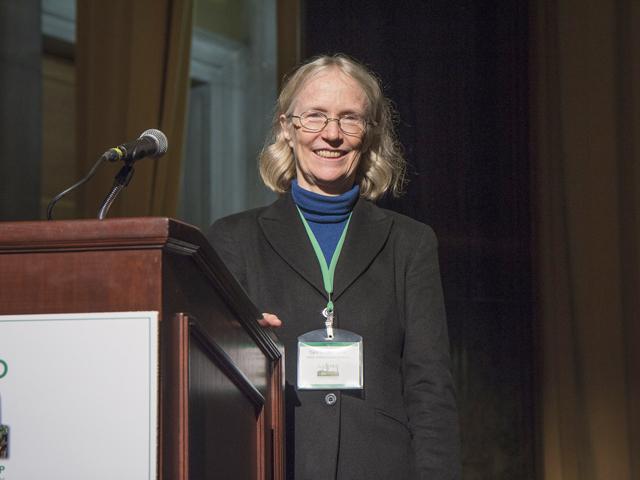