NEW ORLEANS (DTN) -- Leaders from the agency normally associated with rocket launches and space travel -- NASA -- spent time last week showing farmers and people in agribusiness about the satellite data NASA has that already helps USDA and others forecast crop production and weather conditions on the ground.

Last week was the National Aeronautics Space Administration's first foray into the Commodity Classic event. Overall, NASA had a major presence at the event in New Orleans. The agency had a large booth in the expo hall with a series of presentations about crop modeling, weather and partnerships such as the U.S. Drought Monitor.

NASA also used Classic to help put out a new call for proposals for a funding project for a management program that expands the use of satellite data for ways to improve farm practices and expands both economic and social benefits, the agency stated.

Karen St. Germain, director of NASA's Earth Sciences Division, also spoke to National Association of Wheat Growers (NAWG) board members and others about the agency's space assets constantly looking back at the planet.

"My hope is that this is the start of a conversation between NASA Earth Science and wheat growers and other agricultural industry folks," St. Germain said.

Chandler Goule, chief executive officer for the NAWG, explained he met St. Germain at a farmers market in West Virginia and the two began talking about their jobs. Goule joked at first that St. Germain said Goule probably wouldn't find her job interesting as she uses satellites to look at things such as agricultural production.

"I said actually I would find what you do quite fascinating," Goule said introducing St. Germain to his board of directors last week.

ONE OF THE MOST DATA-INTENSIVE INDUSTRIES

St. Germain explained she was starting her conversation with farmers under the hypothesis that agriculture is perhaps one of the most data-intensive industries in the country. She then highlighted how NASA has a range of data tools that are "all free and all freely available," St. Germain said. Such data, though, isn't exactly on one website or one place, but NASA maintains the largest holdings of environmental data in the world with records from satellites going back decades.

"I think there's a natural partnership here because NASA is fundamentally a data agency," St. Germain said. "We already interact now, but what I really want to do to start the conversation on how we might do better together as we move forward into the future."

Pointing to weather satellites built by NASA and other partners, St. Germain said NASA has a fleet of 24 satellites looking back at Earth, as well as another six satellites for the Earth Sciences Division that will be launched later this year. The Earth Sciences Division overall is a relatively small part of NASA, but the division takes the agency's technology such as sensing capability and points it back at the planet to try to understand what is happening here.

"I'm biased, but I think this is the most important thing NASA does," St. Germain said.

Those 24 satellites are globally measuring things like precipitation, soil moisture conditions, windspeed, bio-density such as vegetation, and other items including changes in aquifer groundwater. The satellites, along with NASA's historical data on weather patterns, help forecast scenarios such as the chances for increased precipitation in some areas and drought in others.

"And then what we do is we try to understand how the whole earth is working as a system. And that allows us to then develop predictive capability as well," St. Germain said. She added, "We're also seeing temperatures change, but not universally, not uniformly. So, I think the question we're all facing is what is coming next, and how to we prepare for it?"

That's where St. Germain and others at NASA see a way to marry the agency's work with that of commodity producers. NASA already does its own crop models by combining observations on environmental conditions with the type of crop being grown. NASA's models can simulate a full growing season for a particular crop under a set of conditions and management practices. That includes crop conditions globally.

"That's another element of this; we're not just focused on the U.S.," she said. "We can tell you what is happening around the world, which, I think, is also important information for the ag industry in the U.S."

NASA has run its crop models with the information the agency has been able to collect, tying in the historical record and environmental conditions to model out yields at the county level. With that information, NASA has started projecting out corn and wheat yields around the world, based on how the weather and environment are expected to change.

NASA's models projecting out in the latter half of the century show corn yields dropping significantly in parts of the U.S. while wheat yields rise in parts of the country. The model factors in how a plant uses carbon dioxide and water, and how the plant responds to heat. The modeling shows wheat benefits from increased carbon dioxide while corn sees more stress due to temperature changes. The modeling, however, doesn't build in how management practices and crops may change over time to adapt to those conditions. St. Germain stressed the model is a tool to assess the range of future conditions to help make decisions.

"This is not, and I want to emphasize this, this is not a prediction of the future," St. Germain told wheat growers. "It's a tool, right? So, what this tool could do is now allow us to see where there are likely to be stresses in the system. Then we can start to run scenarios: If you make certain changes, what might the impact be on yields and so forth?" She later added, "This is intended to figure out how we might make those adjustments."

Goule said the NAWG board has been having "a major discussion" about the U.S. Drought Monitor as wheat growers want to see data updated more quicky and feel some areas are not being accurately represented regarding rainfall and moisture. Brad Doorn, who leads a NASA team on water and agriculture, said his team is working to provide more data to the team at the University of Nebraska that operates the Drought Monitor.

"Part of the issue with the Drought Monitor, and I don't want to blame USDA, but they want one drought indicator for everybody across the nation," Doorn said. "So, we're trying to help that requirement with what the needs are on the ground."

"It's why NASA is right here at this Commodity Classic," Nelson said, adding NASA passes down the technology in space craft to farmers and other innovators. Nelson also called on USDA and NASA to maintain their partnership. "Let's continue pushing ahead with the next generation of technology." 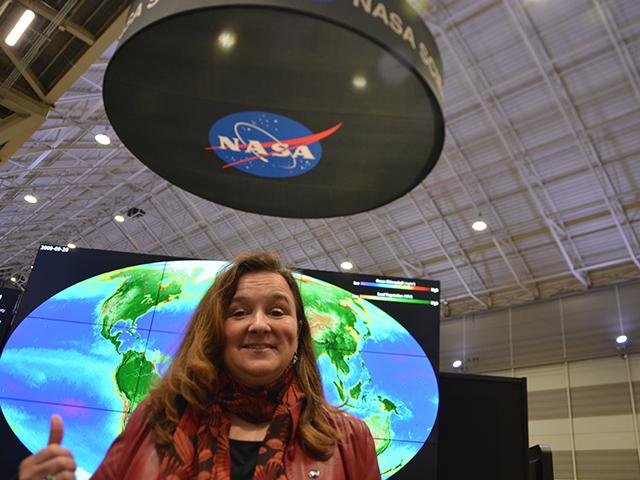