Several national media outlets reported this week the purchase price at $200 million, although Murdoch spokesperson Jessie Lyons would not confirm the sale price to DTN.

The 90-year-old Murdoch purchased the property from Matador Cattle Co., which is an indirect subsidiary of Koch Industries, making it the second high-profile ranch purchase this year.

In June, a company connected to the Church of Jesus Christ Latter-day Saints was the winning bidder for the assets of southeast Washington rancher Cody Easterday, according to court documents filed in federal bankruptcy court. The winning bid was for $209 million. The second-highest bidder was an investment company tied to Microsoft founder Bill Gates, https://www.dtnpf.com/….

"We feel privileged to assume ownership of this beautiful land and look forward to continually enhancing both the commercial cattle business and the conservation assets across the ranch," Rupert Murdoch said in a quote attributed to him by the Wall Street Journal.

According to Forbes, Murdoch's net worth is about $22.6 billion, making him the 85th richest person in the U.S.

According to Matador Cattle Co.'s website, the company operates both Beaverhead and Matador ranches. The ranches were acquired by Fred C. Koch between 1941 and 1952 when the company was formed.

The Beaverhead ranch stretches along a 90-mile road from Dillon, Montana, to the Idaho border and east to Yellowstone Park. The ranch is home to nearly 7,000 cow/calf pairs, "along with a large variety of wildlife including wild game, land and waterfowl, large and small mammals, fish and plant life."

The company's website said the ranch currently has 15 employee families. Beaverhead uses what it calls a rest-rotation grazing plan that allows the ranch to "support 8% more cattle while using 25% less supplemental feed, and does not risk overgrazing, damaging or abusing the grazing lands. Grazing cattle utilizes one of this country's most abundant, natural and renewable resources."

In addition, the ranch features 3,000 acres of irrigated hay pivots for hay production.

"We pride ourselves on being good stewards of the land," the company says on its website. "In 1998, Beaverhead Ranch was honored by the National Cattlemen's Beef Association with its esteemed National Environmental Stewardship Award. The goal of the Environmental Stewardship Award Program is to acknowledge producers who go the extra mile when it comes to preserving and enhancing the resources on their land." 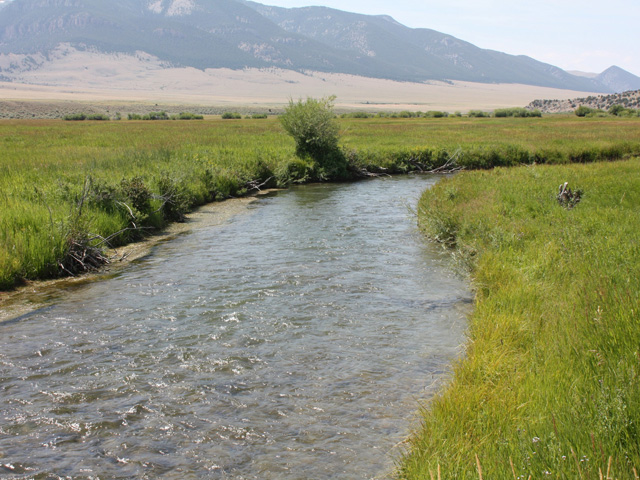