DES MOINES (DTN) -- Lean hogs, at $120.50 per cwt, are the highest they have been since 2014, but pork producers see challenges to the market prices in federal court and the California animal welfare rule.

The Biden administration, caught between swine producers and the union for packing-plant workers, chose Wednesday not to take a position on a request by meatpackers to delay a court ruling from going into effect. The ruling would effectively dial back the line speeds for at least six pork processing plants.

Sorenson and other leaders at NPPC spoke at the opening of the World Pork Expo at the Iowa State Fairgrounds on Wednesday. It may have been a sweltering day outside of the expo hall, but pork producers and exhibitors were pleased to see some return to normality at the event after it was canceled the past two years. Even before COVID-19 shut down last year's expo, the event was canceled in 2019 to eliminate potential risks that African swine fever could come from Asia or Europe.

All of this comes while there is a lot of talk about packer capacity issues. Sorenson made the argument that the line speed decision could reduce processing capacity by 2.5% nationally, but producers in Illinois Michigan, Minnesota, Nebraska, Oklahoma and Pennsylvania who deliver to six processing plants in those states could see processing speeds slow down as much as 25%. That will lead to a backlog of hogs and have dramatic impacts on the current strong prices, he said.

"Smaller producers near these plants will have to sell on the spot market," Sorenson said.

An analysis by an Iowa State University economist shows about an $80 million impact to producers if line speeds are forced to slow at the plants. However, cattle markets have shown in recent years that futures prices can fall quickly when production capacity goes offline.

The battle over the line speed rule continues in both the U.S. District Court of Minnesota and the lobbying efforts by the National Pork Producers Council (NPPC) to get the Biden administration to appeal the district court's ruling, or at least agree to a stay, or delay, of the court's decision.

Local unions for the United Food and Commercial Workers sued the U.S. Department of Agriculture over the rule almost immediately after it was finalized in 2019. USDA is the main defendant, meaning the Biden administration is the lead defendant to file any appeal, or push for a delay.

The packers affected by the line-speed ruling asked the federal judge in Minnesota to delay her ruling from going into effect while appeals are pending. UFCW called on the judge to enforce her summary judgement starting June 29.

Asked about the Justice Department's take, "At least they did not oppose it," said Nick Giordano, vice president and counsel for global government affairs at NPPC. "That's much better than opposing it."

The ruling to slow down line speeds remains at the front of producers' concerns. Sorenson noted some of the plants involved have been running safely for more than two decades. "At a time when the United States is seeking to increase much-needed harvest capacity, this court order will reduce plant capacity at six plans running NSIS line speeds by as much as 25%."

"The administration can prevent this from happening," Sorenson said.

In her ruling on March 31, Ericksen said USDA initially considered the risks of injuries, but then determined that USDA was only compelled to regulate food safety, not worker safety. Ericksen said that the weight of evidence also "clearly demonstrations that line speeds are a risk factor that will increase the already hazardous conditions faced by workers."

Beyond the merits of the inspection rule, NPPC leaders also see the Biden administration supporting rulings in favor of unions despite policy decisions from both Democratic and Republican administrations going back to the 1990s that increased line speeds. The 2019 rule was the culmination of decisions that began decades earlier.

"This is not a partisan issue," Sorenson said. "Development of the new swine inspection system started during the Clinton administration."

On Tuesday, Agriculture Secretary Tom Vilsack told reporters that USDA would leave the decision whether to appeal to the U.S. Solicitor General. On a call about issues related to supply chain resiliency, Vilsack said there are ongoing talks between pork processors and the workers' union about a resolution. "The parties are talking, which I think is a good thing."

The secretary added that the court ruling and line speed debate puts USDA in a position of having to choose between worker safety and farmer incomes.

"Frankly, this case puts the USDA in a very difficult position because it basically puts us in the middle of balancing worker safety, food safety and farmer income," Vilsack said. "And, frankly, I don't think USDA should be put in that position."

Giordano noted the Biden administration has been focused on supply chain resiliency and expanding packer capacity beyond the handful of largest packers. If the ruling against line speeds is allowed to stand, that will run counter to those concerns because most of the packers affected are owned by groups of producers.

"We've consistently heard from both sides of the aisle that we need more capacity and we need to protect small producers," Giordano said. "Didn't we just this week have a supply chain announcement? Well, what's the point -- to add capacity? We're talking about national security and supply chain bottlenecks, and we're taking 2.5% out?"

Giordano added that Ericksen also ruled against the inspection system on a technicality involving procedures, not because of any evidence showing higher risks to workers, he added.

Giordano also confirmed some comments from Vilsack that the packers and the union have been talking about a resolution that could resolve the court case.

NPPC also is fighting California's Proposition 12 on multiple fronts. The law passed by California voters in 2018 requires hogs to be sourced from sows that have at least 24 feet of usable floor space. NPPC argues Prop 12 will lead to exorbitant costs for producers to comply and cause some smaller hog producers to shut down.

While the law is set to go into effect next January, the California Department of Food and Agriculture did not issue its proposed rule for regulations until May 28. The rule is nearly two years behind schedule, and it's questionable whether the final rule will be out before the end of the year. That could make it impossible for pork producers to prepare for California's rules. As a market, California consumes about 15% of the nation's pork. 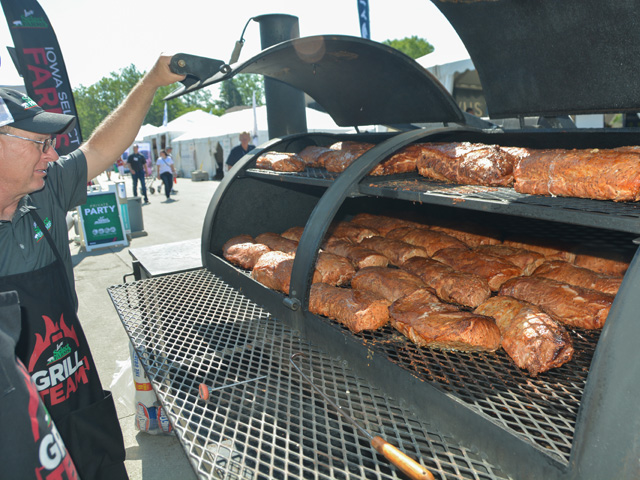