OMAHA (DTN) -- While Senate Democrats are confident about the ability to get a bipartisan agricultural climate bill passed, the rift remains with Republicans over USDA's authority to spend money on a carbon sequestration program without getting approval from Congress first.

Senators highlighted the need to pass the Growing Climate Solutions Act to ensure USDA can set standards and certify programs that would allow farmers to join carbon markets. The bill passed out of the Senate Agriculture Committee on a voice vote, meaning no one opposed the bill.

Senate Agriculture Committee Chairwoman Debbie Stabenow, D-Mich., told reporters she's "very confident" the Senate will bring the bill to the floor, but it is a question of finding floor time with votes on nominees and other legislation, she said. The bill is needed quickly because of the accelerated expansion of different carbon programs now being offered privately by companies. The multiple carbon programs out there are increasingly competing for farmers' attention. Stabenow wants to see USDA's involvement, which will include creating a "certified list of technical experts" so farmers feel confident in their decision to join a carbon market. "The sooner we get this structure in place for farmers, the better," she said.

Stabenow also said the White House "missed the mark" in its infrastructure package, which proposed $1 billion in funding for "climate-smart agriculture" over eight years. That's a low budget proposal for a conservation program of the scale that will be needed to have a significant impact on carbon emissions. Stabenow said she is working to get "significant resources in there that funds conservation."

Getting federal dollars invested would boost the baseline budget for USDA conservation programs the next time Congress drafts a farm bill, thus providing another long-term injection of federal dollars authorized by Congress.

Sen. John Boozman, R-Ark., ranking member on the Senate Agriculture Committee, joined Stabenow's ag-climate bill, which now has gotten more than 40 senators from both parties -- equally -- to co-sign the bill. Still, Boozman and other Republicans have repeatedly pushed back on the idea of USDA starting a carbon program without specific legislation from Congress.

"I'm very much opposed to a carbon bank," Boozman said. "If Congress wants to do that, we can do that. We're going to need to vote on that."

"To say that carbon is an agricultural commodity is really a stretch," he said.

Sen. John Hoeven, R-N.D., who is ranking member of the Senate Agriculture Appropriations Subcommittee and a member of the Agriculture Committee, stressed that whatever is done on agriculture and climate change "has to be farmer-friendly to get my support."

Hoeven also said he does not think CCC could be used to fund a carbon program. "That would be something that would be legislated."

Hoeven noted changes had to be made in legislation for the CCC fund so ranchers could qualify for Market Facilitation Program payments.

Democrats largely support the ability of Agriculture Secretary Tom Vilsack and USDA to use the CCC fund for a carbon program. A "carbon bank" would likely pay farmers who have used no-till or cover crop practices for a long period of time and would not pick up "additionality" of more carbon in the soil. Such a bank would also apply to farmers who may farm in areas where the soil and climate will not sequester carbon quickly.

During the Trump administration, then-Agriculture Secretary Sonny Perdue used CCC funds to create trade-aid payments to offset tariffs from China -- the Market Facilitation Program. Democrats point to that example to show Vilsack could use CCC creatively to establish a new program.

"We do know there is some flexibility that the former secretary used for recovery during the pandemic," Stabenow said. "I think it's all in how we work together with the secretary and the ranking member on those kinds of things."

"The previous secretary found many creative ways to use the CCC -- not all of it was as transparent as some of us would have liked to see," Baldwin said.

Both Baldwin and Stabenow stressed the importance of the CCC in covering the costs of current farm-bill programs. Each then added there will need to be more ways to increase incentives for farmers to adopt more voluntary conservation practices. "I do know that farmers want increased support -- financial support -- and incentives," Stabenow said.

Baldwin added her subcommittee will hold a hearing this week about finding ways to improve profitability on farmers.

"I certainly think the potential for paying farmers to adopt practices that help additional carbon sequestration is something we should be very serious about," Baldwin said.

Members of the Senate Agriculture Committee met informally Tuesday with Vilsack. Among the issues that came up was the Biden executive order reference to 30x30 -- conserving 30% of land and water by 2030. Vilsack talked in terms of voluntary programs such as the Conservation Reserve Program (CRP), for which USDA last week announced a new sign-up to boost enrollment by 4 million acres. Hoeven noted Vilsack talked about incentives for voluntary programs.

"So, it's easy to make statements, but the question is how do you do it?"

Boozman pointed to the push by USDA to increase CRP rental rates to boost the acreage by as much as 4 million acres. Boozman said there just has not been as much demand for CRP, even though the farm economy leading up to late last year had a string of bad years. The program was still "under-prescribed," Boozman said.

Rep. David Scott, D-Ga., chairman of the committee, said compensating farmers based on the amount of carbon that is sequestered must also treat farmers fairly. His committee will likely hold a hearing specifically on carbon credits, he said.

Scott noted, "There's no measurement. There's no verification. And we have companies ... They are growing by leaps and bounds."

He added later, "There are a zillion carbon markets that are just popping up."

Scott specifically said he likes how Bayer Crop Science is starting its carbon initiative paying farmers for specific practices without detailed carbon measurements. Bayer is offering to pay farmers $3 an acre per year for no-till or strip-till practices, and $6 per acre for cover crops. Scott said that's a lot less complicated than the technical aspects of verifications and measurements. But he said some kind of regulation is needed for measurements.

"I do know this: We need to put some guardrails in there right now -- and I've talked with the ranking member -- there is no measurement devised for the amount of carbon sequestration," he said, citing that Bayer pays farmers for practices they already know how to do."

Scott did not specifically say where he stands on CCC funds. He did say, though, that moving quickly to insert agricultural carbon credits into an infrastructure bill is "not bipartisan." Scott, though, then indicated that there is value for the U.S. to "establish ourselves as a leader on these issues" by getting a bill passed.

Scott is also focused on drafting legislation to provide punitive measures against USDA employees who discriminate against Black farmers, as well as help Black farmers and other socially disadvantaged farmers gain more market access through incentives, he said. Scott described a bill that would include tax benefits for companies that buy from minority farmers.

"So, we're going to put in here incentives and benefits in which we can work with the agricultural market system, each way. Our wonderful world of agriculture is very diversified. There are various pockets where the purchasers of products of the farmers are compensated for." 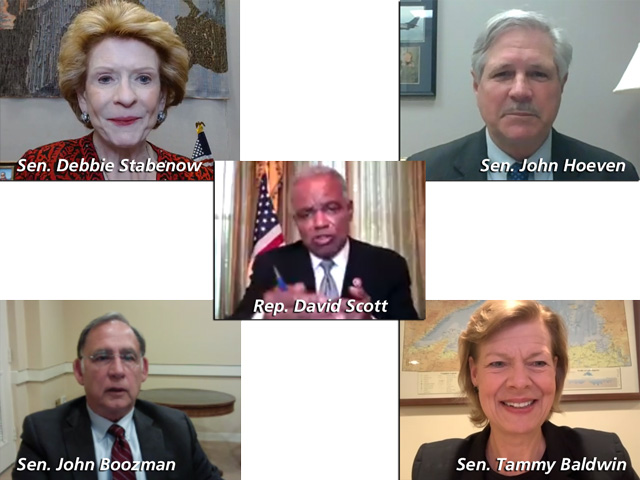