OMAHA (DTN) -- As if the 2019 growing season didn't have enough weather challenges, corn harvest has come to a complete halt for some farmers as propane for crop drying has been hard to secure. Increased demand nationwide due to extremely cold weather is limiting supplies available for drying crops.

While extremely frustrating for these who have seen corn harvest stifled, the good news is more-seasonable temperatures are expected to return to most of the country. This, in turn, should lower demand for propane and make more available to the market; but it will take some time.

The lack of propane supplies for crop drying is more evident the farther north you move in the Midwest. This region faced a double whammy with crops that were wet and locations farther away from the pipelines that supply the product.

"For those in more northern areas, they are at the end of the line and it is more expensive to get the product to these places," Wallace said.

The increase in demand has not affected the price of propane, at least not yet, although some local areas have seen increases. The propane price at the Conway, Kansas, Hub that stores approximately one-third of the nation's propane, finished Thursday at 52.75 cents per gallon, which is actually lower than a year earlier.

Wallace said he believes the market is looking ahead to the coming weeks when temperatures across the Midwest are forecast to return to more-seasonable levels. This will lessen demand at terminals and, hopefully, there will be more supply available for farmers drying crops, he said.

DTN Senior Ag Meteorologist Bryce Anderson said this November had a historic cold snap -- the coldest in a century in many areas east of the Rockies. In many instances, temperatures were 20 to 30 degrees lower than normal.

"What made this one stand out is the fact that this Artic cold plummeted all the way south to the Gulf Coast with its harsh impact," Anderson said.

Matt Undlin, a farmer from Lansford, North Dakota, told DTN his corn harvest could be stalled for the rest of November due to lack of propane to dry down his crop. His retailer said they were 10 semi-loads behind and priority will be given to hospitals, churches, schools, businesses and residences. If any propane is left, it will be made available for crop drying, he said.

In addition, they were limiting residents to 100-gallon maximum fills and they were not going to be refilling anyone if the tank was at 30% or more.

"We were expecting it to happen but it still sucks," Undlin said.

If that isn't enough, the lack of supply has caused Undlin's local propane prices to climb. Price was $1.30/gallon Tuesday and Wednesday it was $2.00/gallon and could climb to $2.50/gallon in the coming days, he said.

Undlin said he is only about 10% done with his corn harvest. They planted the crop around normal planting dates, but the corn's moisture is still 22% to 26%. One positive is yields, which have been roughly about 10% above normal, he said.

December is usually extremely cold in north-central North Dakota with high temperatures around zero Fahrenheit -- too cold to dry crops. Undlin hopes he can get enough corn harvested to fulfill his contracts; some of his corn may be bagged, while some may just have to stay in the field.

The same situation is also present farther east. Roxi Thompson, who farms near Harmony, Minnesota, could not get propane last week to continue harvesting corn.

Thompson said Thursday they called their supplier to tell them they would need more supply. It doesn't appear they will be able obtain more propane anytime soon and it could be up to four weeks before more gas is available, she said. Thompson had received some propane on Monday of this week.

"This is serious for us because we still have 700 acres of corn standing in the field, with winter weather on the way," Thompson said. "For a farmer, the worst feeling in the world is to be unable to do the work they know must be done."

A southern Wisconsin farmer who asked to remain anonymous said he too has not been able to get propane this week as he tries to continue corn harvest. A growing season with 422% above-normal precipitation delayed crops and his corn's moisture level ranged from 22% to 30%.

"We have snow (this week) but our wet tanks are full," the southern Wisconsin farmer said.

He wanted to point out his propane dealer has been great during this ordeal and has done everything possible to obtain propane. More propane was scheduled to arrive at this Wisconsin farm today (Friday) and corn drying will begin again.

Roger Leider, executive director of the Minnesota Propane Association, said there is plenty of propane supply in the nation. The pressing issue is the extreme demand. He reported wholesalers in the state are seeing 150% of normal demand at this time of year.

Retailers in the state have made priority lists, which include animal confinement facilities and home heating first, while grain drying falls in line second. He has heard from some less-than-happy farmers who want to dry corn, but usually an explanation of the current situation will satisfy them, he said.

Leider warned the rest of November will be challenging to keep propane available for everyone who wants it. There are no quick fixes to get large amounts of the product shipped from Conway, Kansas, to Minnesota.

"Inventory levels in the state are going to be way down during the month," Leider said. "I figured it would take 700 semi-loads just to get us back to standard levels and this is on top of the 250 loads we use a day here."

Hopefully, by the end of the month more supply will be available in the state; but even then this recovery period may stretch into December, he said. Leider said the good news is the supply of propane looks to be ample and the price shouldn't increase much, short of more extremely low temperatures. 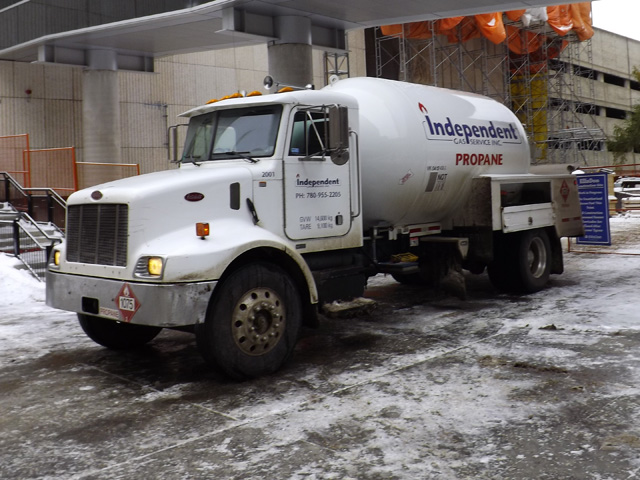