OMAHA (DTN) -- President Donald Trump on Wednesday hardened his line against China, its retaliatory tariffs and its public relations campaign by accusing China of interfering in the U.S. midterm elections. Trump later said China is attacking the "farm belt" with ads and tariffs.

The challenge against China came just hours before the White House also announced the U.S. would begin trade talks with Japan. Trump said he and Japanese Prime Minister Shinzo Abe had agreed to start trade negotiations, and expressed optimism about their outcome. Trump has frequently criticized the $69 billion trade deficit the U.S. has with Japan, largely due to automobiles.

"I think it will be something very exciting," Trump said, speaking to the White House press pool. "It can only be better for the United States...I think it's going to be better, really, for both countries."

In a joint statement, the U.S. and Japan would focus on market access for U.S. automobiles and Japan, considering agricultural, forestry and fishery productions, would consider "outcomes related to market access as reflected in Japan's previous economic partnership agreements constitute the maximum level." The statement indicates Japan would be willing to offer agricultural access similar to its trade agreements with Australia, the European Union and the Trans-Pacific Partnership.

"Achieving high-standard trade agreements is a top priority for American agriculture, and the announcement of the beginning of negotiations for a U.S.-Japan trade agreement is an important step in that process," Perdue said. "This is welcome news, since we know that export income is critical to the financial health of agriculture and is a key contributor to rural prosperity. Japan is an important customer for our agricultural products and we look forward to the great potential this breakthrough represents. Today's announcement is further proof that President Trump's approach to trade -- standing strong for American interests and bringing other countries to the table -- will benefit our entire economy, including the agricultural sector."

Still, products such as U.S. beef are hindered in Japan because other countries have significantly lower tariffs than the U.S.

While trade talks with Japan may ramp up, the tariff battle with China is heightened following $200 billion in U.S. tariffs imposed on Monday that prompted China to halt new trade talks. President Trump then challenged China during a United Nations Security Council speech on Wednesday.

"Regrettably, we found that China has been attempting to interfere in our upcoming 2018 election coming up in November against my administration," Trump said in his speech. "They do not want me, or us, to win because I am the first president ever to challenge China on trade. And we are winning on trade. We are winning at every level. We don't want them to meddle or interfere in our upcoming election."

China accounted for nearly $20 billion in U.S. agricultural exports in 2017, but sales have slowed dramatically as China has placed tariffs on nearly every U.S. ag product. The tariffs prompted USDA to issue roughly $4.7 billion in direct aid to farmers this fall to help make up for some of the lost income from declining prices.

The president's accusation comes after a Chinese newspaper in the U.S., "ChinaDaily," published a four-page insert in the Des Moines Register on Sunday. The insert included detailed articles about the U.S.-China trade relationship, using numbers from a white paper Chinese officials also released on Monday, and headlined one page "Dispute: Fruit of a president's folly." The insert also included an article about Chinese President Xi Jinping's trips to Iowa and his fondness for the state.

President Trump is making the case China is helping his political opponents much like the allegations that Russia interfered in the 2016 presidential election to help Trump's campaign.

"These activities have reached an unacceptable level," the White House official said.

Some of the ways China was interfering with the U.S. political system included "hurting farmers and workers in states and districts that voted for the president because he stood up to the way China has taken advantage of our country economically," the official said.

The White House said China rewards or hurts U.S. businesses and politicians depending on whether those business and political leaders criticize China. Further, the White House official said, Chinese news organizations will now be required by the Trump administration to register under the Foreign Agents Registration Act. 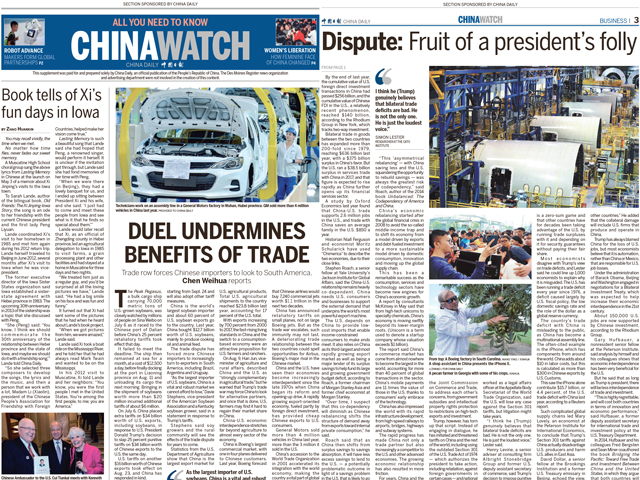