OMAHA (DTN) -- The tide has turned this spring in corn and soybean prices, leaving farmers with unexpected marketing opportunities, and also possibly nagging worries about selling too early in a market rally.

Jeff Hainline, chairman of Advance Trading, Inc. in Bloomington, Illinois, said corn hitting $4 per bushel was the big number which sparked aggressive new-crop sales. "Above $4 they don't have a paradigm for what to expect, so it has slowed down," Hainline said.

Farmers have since become more reluctant to sell because they see their earlier, lower-priced sales as bad decisions. "He (the farmer) becomes reticent that he started selling sooner than he should have because prices have gone higher than he anticipated," Hainline said.

Futures selling has slowed for soybeans as well. Part of that is due to farmers being uncomfortable selling ahead too large a percentage of the crop to come.

Despite daily volatility in corn and soybean futures, DTN Senior Analyst Darin Newsom said indicators remain bullish. In corn, Newsom noted the market is looking beyond USDA's forecast for 2016-17 U.S. corn ending stocks above 2 billion bushels. He also pointed to the narrow spread between the December contract and the March 2017 contract, which reflects an increasingly bullish outlook for corn.

Corn remains in the lower half of its five-year price distribution range, with targets on the long-term monthly charts still considerably higher for both futures and cash sales.

For nearly all commodities, Newsom said, "We have seen increased noncommercial interest in the market."

Analysts are waiting for the Federal Reserve decision expected Wednesday on interest rates. An interest-rate hike could pull some trader money out of the market, but most market observers believe it's unlikely the Fed will raise rates this month.

Producers are more upbeat about the market situation than they were a few months ago when the emphasis was on just how much money farmers were going to lose per acre. Some say it's important to take advantage of the market rallies over the past month considering how low marketing expectations were earlier this spring.

"I was at a meeting here in March and they were talking about $3 corn in the fall, and that could still happen, so that's why I don't think this is an opportunity you can pass up," said Bob Hemesath, a farmer from Decorah, Iowa, and president of the Iowa Corn Growers Association.

Keith Alverson, who farms near Chester, South Dakota, noted that just three months ago the lack of profit opportunities made the conversation about ensuring farmers have enough cash flow or equity to make it to next year. "This has really given a lot of guys an opportunity to lock some stuff in," Alverson said.

Hemesath said considering the big corn and soybean crops harvested last fall, stocks still available, as well as the projections for large crops next fall, "... with all that, I think these prices look pretty attractive."

Hemesath said recent hedge-to-arrive contracts have moved the needle on his operation from looking at potential losses to more breakevens for his corn, or even possible profits.

"We've been selling into this rally all along and right now with the market where it is, some of the sales looked a little low, but we're looking at it from a more holistic approach and averages," Hemesath said. "We just want to keep feeding into it and bringing the averages up with every sale."

"When I determine where I want to go with the corn, then we lock in the basis," he said. The hedge-to-arrive contract also gives Hemesath the option to roll ahead for a possible spring delivery.

Alverson said he has been selling into the rally and has been pleased to see more sales at profit. He's sold a little more than 50% of his expected corn production and 70% of soybeans.

"That was really the target ... to find some sales at profitable levels because there was definitely a period of time there where things were pretty bleak as far as profits in the countryside," Alverson said.

Alverson hedges on the CME board then buys back the contract and does a cash sale once he sees an opportunity to lock in a basis for delivery. He prefers a straight hedge because of options for delivery and varying basis, depending on where he delivers. "If I just do a hedge on the board, then that keeps those options open for me," he said.

Delaware farmer Richard Wilkins, current president of the American Soybean Association, said he generally uses his revenue insurance to provide some put protection. The insurance guarantee at the end of February for soybeans was $8.85 a bushel, which then adjusted lower, depending on the percentage of the crop covered by a policy. Wilkins is still planting and trying to gauge what the size of his crop will be.

"It's always dangerous to forward contract something when you don't know for sure if you are going to produce it or not," Wilkins said, noting his local soil conditions are a factor he has to consider. "We can go from excess moisture to drought conditions in a week's time. We tend to be a little more cautious to make sure we have the production."

Still, at least part of Wilkins' farm is irrigated so that he could more safely forward contract. He is also growing a high-oleic Plenish variety, so he's taking another look at what a forward contract might do for him there.

"Looking at the prices available right now, that's what we're toying with, is locking in a price that's better than the crop insurance put," Wilkins said. "We're looking to see if we want to take advantage of this rally and price some of those Plenish soybeans."

Wilkins also has 4,800 bushels of old-crop corn he hasn't sold. He's keeping some of that for cattle feed, but he is watching the rally. "When the market sends me a signal that it is running out of steam, then we will go ahead and liquidate the rest of the old-crop corn," Wilkins said.

Wilkins said he has heard of some seller's remorse from friends. "Well, the tongue-in-cheek from some of my board members is they wish they hadn't sold so early," Wilkins said. "There are definitely some selling opportunities. Someone that has a marketing plan where they utilize options and futures positions, I think there are some good opportunities there to lock in profits."

Alverson said he doesn't worry about seller's remorse when forward contracting but focuses on the numbers and locking in a profit.

"It's tough not to have seller's remorse when you see a market rally, but there have been plenty of years when you make that sale, and the market goes the other way and you are pretty glad for being aggressive when the opportunity was there," Alverson said.

Hainline added that discipline in marketing is critical because people tend to become bullish near the top of the market and people become emotional, partially because they have given up on their marketing plans.

"That's normally when the best opportunities are had," he said. 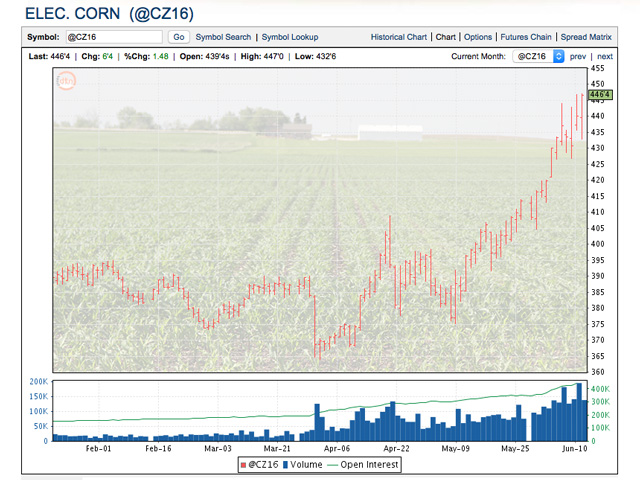