Changes in what consumers were looking for at their local meat counters were already well underway before anyone ever heard of COVID-19. But, as the pandemic limited availability of consumers' tried-and-true cuts, many tried something new. Those newer cuts largely come from the four primals: chuck roll, rib section, loin section and round.

Davey Griffin, AgriLife Extension meat specialist in Texas A&M's Department of Animal Science, explains that breaking down a carcass results in about 33% trimmable fat and bone, and 20 to 25% trimmings for things like ground beef and pizza toppings. The middle meats, where higher-value cuts such as steaks come from, make up 10 to 12% of the carcass but account for nearly a full third of the value of the carcass.

"The rest of it is the other muscles, and those are the ones we are trying to utilize more, enhance the value. They are the lower-cost muscles that still provide an excellent quality beef cut for consumers," he explains.

Griffin adds that being able to enhance cuts from the chuck and round not only helps more consumers have great, moderately priced eating experiences, but it boosts overall value of the carcass. And, that, in turn, has the potential to add value to live cattle.

Beef cuts have changed over the years following trends that include smaller families and less time to cook.

"They aren't cooking a great big roast or porterhouse steak anymore," Griffin says. Rather, the chuck is being broken down into cuts targeted at more current styles of cooking and eating.

"The second most-tender muscle in the beef carcass comes from the chuck and is now being merchandized as a mid-priced flat iron steak," he continues. Other newer cuts today include the petite shoulder tender, rib-eye filets, rib-eye caps and sirloin caps.

There was a time when retailers couldn't get much movement on some of the newer cuts, Griffin notes. "Now, with newer customers and those trying new things, they are starting to get movement, and customers are having good experiences and are willing to try them again."

For cattle producers who raise their own beef, Griffin says the shift to new cuts has sometimes left them asking what the meatcutter did with all of their T-bone steaks.

"When I'd ask if they got certain other cuts, they'd say 'yes.' You can't have both out of one side of beef. You have to understand how the cuts are made," he explains.

Cattle have only 13 ribs, and they can be cut into several different retail and food service cuts. Chuck short ribs, for example, are cheaper than the counterpart ribs from the plate, but they contain the same flavorful muscle. Back ribs are less meaty, coming from under the rib-eye roll, so they are less expensive.

"The chuck short ribs are used a lot for export, but they are otherwise cheap on the market because of the barbecue influence," Griffin says. "If you want to receive the plate short ribs, you can't do a tomahawk steak. So you have to pick one or the other out of a side of beef."

With so many new cuts, Griffin advises anyone processing beef for themselves or buyers to talk to the processor about what they would like to have. And, he tells processors, "Be prepared, because that's how the consumer is eating today. The muscles haven't changed, but we are using them in smaller, more utilizable pieces for the consumer." 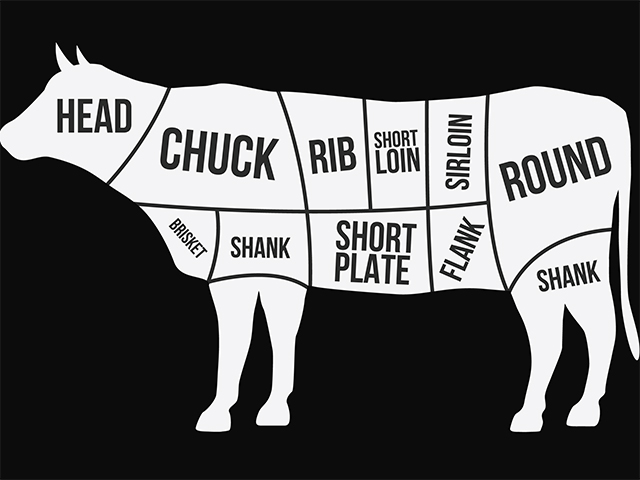