OMAHA (DTN) -- Cattle producers who want to purchase hay need to plan ahead. The drought this growing season has limited supplies and pushed prices higher, according to University Extension educators.

When purchasing hay, there are several factors to be considered, including price, quality and storage.

In a University of Nebraska-Lincoln (UNL) Center for Agricultural Profitability webinar titled "Planning Ahead for Hay Purchases", UNL Extension staff recommended livestock producers who plan to purchase hay begin to think about their needs now. Supply will be limited due to the drought currently affecting forage production.

Randy Saner, UNL Extension Beef Systems educator based in North Platte, Nebraska, said forage production hay stocks in the U.S. are at a 50-year low, thanks in part to dry conditions. All of Nebraska was affected by drought this growing season and alfalfa production will be considerably less in 2022 compared to 2021, he said.

With less production within the state, some producers might consider shipping hay in from other states. With drought to the west and south one option might come from the north, he said.

"If producers can't find any hay in Nebraska, they might want to look at South Dakota," Saner said. "They produced a lot of hay this year."

With less hay available, this means prices will be more expensive. Forage prices could climb even higher if the upcoming winter is especially cold and wet.

The USDA Nebraska Direct Hay Report for Sept. 29 (https://www.ams.usda.gov/…) stated alfalfa sold steady to $10.00 higher while grass hay sold steady with the previous week. Demand was good, especially for hay that can be shipped to out-of-state buyers, the report said.

"Once again, hay buyers from south of Nebraska have been up in the area looking for large quantities of forages that can be easily shipped," the USDA report said.

Saner said if livestock producers do purchase hay, there are certain things to keep in mind.

Producers should try to buy forage by the ton and not by the bale. Bales range in weight by several hundred pounds, so purchasing hay by tonnage assures you are not being shorted by the weight of the bales, he said.

If possible, try to purchase hay in tightly rolled, dense bales with square shoulders, he said. Bales with net wrap would also keep water out of the hay.

"You want bales free of molds, weed seeds and high levels of nitrates," he said.

For instance, young calves would need higher quality hay than older cattle would need. Additional supplements would need to be fed if the quality of hay is lower, he said.

T.L. Meyer, a UNL Extension Beef System educator based in Thedford, Nebraska, said once hay is purchased where it will be stored and fed are important considerations.

While it may not be possible in all operations, hay stored inside is the best option to keep moisture off the hay. If inside storage is not a possibility, then store the bales in a well-drained area, she said.

Meyer said bales should be lined up from north to south, at least three feet apart.

If the purchased hay does have some weeds in it, consider feeding the hay in a limited area. This will control weed growth the following spring, she said.

"Purchase hay now or at the very least have a plan for feeding some sort of alternative," Meyer said.

The Nebraska Department of Agriculture has a Hay and Forage Hotline website (https://nda.nebraska.gov/…). This website was created to connect buyers and sellers of forages.

The site has additional resources including several links, including one to the Nebraska Department of Transportation to address questions related to the hauling of hay (https://dot.nebraska.gov/… 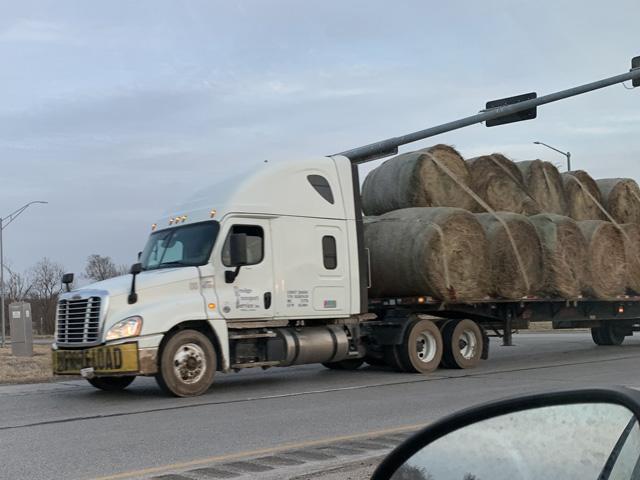