NASHVILLE, Tenn. (DTN) -- The U.S. beef industry will focus on demonstrating "climate neutrality" in cattle production by 2040, under a set of environmental, economic and social sustainability goals laid out Thursday by the National Cattlemen's Beef Association.

"This really drives down at the heart for us as an association," Woodall said. "Five years ago, 10 years ago, there is no way this panel would be taking place at NCBA, period. There's no way."

NCBA set up a task force on sustainability 18 months ago to counter news reports and messaging to consumers that the beef industry is responsible for greenhouse gas emissions. After questions from producers, NCBA leadership needed to step up to take the lead on the topic, said Marty Smith, a Florida cattle producer and former president of NCBA, who chaired the sustainability working group.

"We have got to do this so we can impact and get ourselves back on the right side of things with consumers," Smith said. "We are the solution; we are not the problem."

While NCBA officials and producers cited negative perceptions by consumers need to be countered, the CattleFax industry outlook released Wednesday showed consumer demand for beef is at a three-decade high. NCBA consumer research also showed the 14% or so of people who are "highly focused on sustainability" also overall are more positive about beef than the general public.

"Not everyone is negative about beef who cares about sustainability," said Shawn Darcy, senior director of market research for NCBA.

Environmentally, NCBA set a goal to "demonstrate the climate neutrality of U.S. cattle production by 2040." NCBA cited the U.S. beef supply chain "has the lowest greenhouse gas emissions footprint of all beef-producing countries in the world and has been a leader since 1996." NCBA stated cattle producers play a vital role in mitigating climate-related risks, and the industry is committed to being part of the solution.

President Joe Biden has pushed to move the U.S. economy to "net-zero" emissions by 2050. Within that goal, USDA is tasked with focusing on ways to reduce emissions in agriculture and food production, as well as boost carbon sequestration.

Climate neutrality translates into demonstrating "minimal or no effect on acceleration of warming in the atmosphere," said Jason Sawyer, an associate professor and researcher at the King Ranch Institute at Texas A&M.

"Does that sound reasonable?" Sawyer said. "Because when people talk about greenhouse gas emissions, nobody really cares, right? What people care about is global warming."

Sawyer pointed out methane emissions from livestock are necessary. Methane needs to be looked at as a competitive advantage that cattle have over other proteins by taking forage and converting it into high-quality protein, Sawyer said. Methane emissions, considered 27 times more potent than carbon dioxide, can be reduced by the industry and managed, Sawyer said.

"Trying to make methane go away is not a winning proposition," Sawyer said. He added, "The goal should not be to make it (methane) go to zero. We just need to manage the rate of methane emissions so that the warming effects go to zero."

The focus does not have to be just on methane, as Sawyer noted there are other ways ranchers can reduce emissions and sequester carbon in the soil. Rangeland sequesters a small amount of carbon per acre, but increases in carbon sequestration over the landscape of grazing lands would make a positive impact, Sawyer said.

A second pillar of sustainability also relies on economic goals. NCBA is seeking to boost producer profitability and economic sustainability by 2025. NCBA leaders stressed the importance of producers being profitable, even in changing climate conditions.

Bruce Mershon, a Missouri cow-calf producer and a member of the NCBA's live cattle working group, said the sustainability of cow-calf producers is challenged by the lack of price discovery upstream. Feeders that have alternative marketing agreements with packers are shrinking the cash trade for fed cattle, and that falls back to affect cow-calf producers such as himself who have implemented best grazing practices, improved their livestock genetics and raised the standards of their cattle in recent years.

"Our prices are depressed at the cow level because we are not getting the full view of what the beef are worth," Mershon said. "We're the guys that start the process, and we have a long-term investment in those cattle. We've got a better product than we had 20 years ago, but we're not seeing those rewards come back to the cow-calf level."

NCBA's third pillar includes social goals, which include increasing trust in cattle producers as stewards. That means demonstrating strong animal welfare practices and expanding programs such as the Beef Quality Assurance (BQA). The industry also needs to show that the well-being of its workers is important.

"The goals show that U.S. cattle producers are committed and accountable," Williams said.

DTN asked Williams about sustainability challenges facing producers in Western states such as California because of extreme drought. Williams said producers have always adapted to adverse weather conditions, but he acknowledged that conditions are becoming drier over time where he ranches.

"You have to get more efficient, and you have to be more knowledgeable about your inputs," Williams said. "Your management strategies have to change."

Other affiliated industry groups in the restaurant and food service industries also want to see the cattle industry elevate the story of sustainability as consumers and investors ask more questions about food sourcing, said Kristine Richmond, director of sustainability for the Darden Restaurants -- Longhorn Steakhouse, Olive Garden, Cheddar's and others.

David Norton, North American president for Sysco, said cattle producers can be some of the strongest voices and should tell their stories about sustainability on their operations.

"We have to offset some of the negative press we're getting with your stories," Norton said. He added, "We have got to change this narrative. We don't want people to feel bad because they enjoy a good steak." 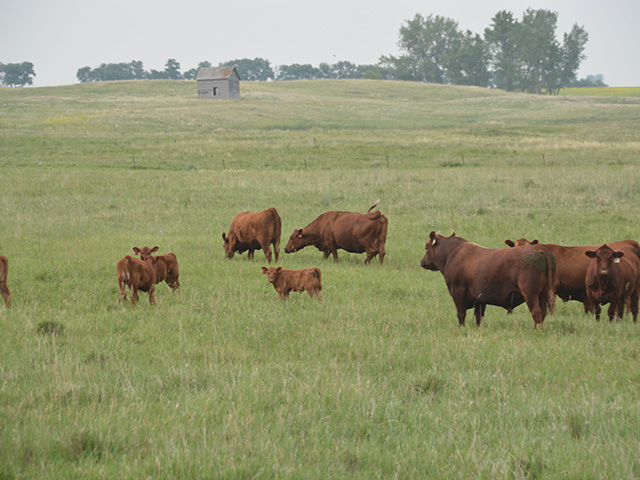