The webinar can be viewed at: https://www.youtube.com/…

Zach Hyland, a regional crop consultant for Farm Bureau Financial Services, said in the webinar the popularity of the LRP program has taken off in the first six months of 2021. About 40,000 feeder cattle in Nebraska are insured in 2021, compared to less than 10,000 in 2020. Volatile livestock prices are pushing more livestock producers to try the insurance, he said.

The LRP program allows producers to select a percent of daily livestock prices from 70% to 100% for different kinds of livestock. The price is determined from the Chicago Mercantile Exchange's (CME) Feeder Cattle Contract, which is cash settled to the CME Feeder Cattle Index daily and not through local markets. Hyland said those who utilize the insurance will have to select four main parts with LRP.

Second, producers then will need to select a coverage percent from 70% to 100%, he said. The coverage price acts as a deductible so 95% would be for the coverage with 5% being the deductible at the 100% level.

INSURE ANY NUMBER OF HEAD

Producers would next need to figure out how many head to insure, which can range from just a few head to thousands. For fed and feeder cattle, up to 6,000 head can be insured per endorsement and up to 12,000 head can be covered in a crop year, which runs from July 1 to June 30.

Hyland said one important aspect of LRP producers should remember is if there are death losses to notify the insurance agent within 72 hours. Without notification, no indemnity is paid on the terminated portion of the endorsement, he said.

Hyland gave an indemnity calculation during the webinar.

Rod Cristen, a producer from Steinauer, Nebraska, said he first used LRP to lock in a price for some calves during a recent drought in his area of southeastern Nebraska. The price dropped before he could sell the calves, and using LRP worked out well for him, he said.

Robert Wareham, a producer from Whiting, Kansas, said he first used LRP last year for the first time on 100 weaned calves. He felt like he needed to do something due to the volatility in the cattle market. He markets his calf crop in January as one large group, and he saw a good price and locked it in. The price dropped and he netted $2,469 or $24.69/head.

"It was less cost than options and it gives you piece of mind that the bottom wasn't going to fall out and wreck the one time of year we sell our calves," Wareham said.

Wareham said producers need to work with an agent who knows the product well. It is an excellent tool for reducing costs, he said.

Christen said LRP said LRP works good for smaller operations as he only covered five to 10 head to start out with. He locked in a price when he felt like the market couldn't get any higher, he said. Hyland said he advises producers to set a consistent marketing strategy. They will then need to stick with this plan for at least three to five years, he said.

If anyone is interesting in LRP, he suggested producers talk to their local Farm Bureau agent. "One thing you must do is to have an AD1026 filed at FSA to be eligible for the subsidy," Hyland said.

More information on LRP can be found at: https://www.rma.usda.gov/… 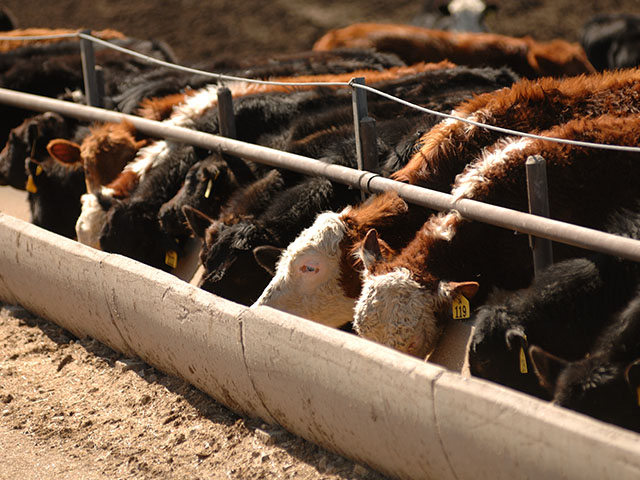