OMAHA (DTN) -- With multiple years of frustration by cattle producers over the price spread between fed cattle and boxed beef, economists Wednesday pointed to supply and demand -- as well as repeated black swan events -- while a pair of cattle producers went back and forth about the value of increased cash trade versus the security of marketing agreements with packers.

So went a hearing before the Senate Agriculture Committee meant to examine some of the challenges with cattle markets as senators sought some answers to systemic problems that have faced the cattle industry for years. Packer concentration, weaker cash trade, and greater reliance on alternative marketing agreements have been trends in the industry, but they became magnified during the past two years as individual market disruptions have led to a wider spread between what feeders are getting selling fed cattle and what packers receive for selling beef.

The spread between USDA reporting for boxed beef and live cattle prices continues, even as fed cattle prices have risen. Choice boxed beef cutouts on Wednesday were $312.05, down from record prices from a year ago, but the boxed beef price has been climbing all spring and remain at highs for 2021. The average fed steer price has ticked higher in 2021, coming in at $125.37 per cwt on Wednesday, coming in right at about the five-year average price.

As was repeatedly noted Wednesday, the price challenges are highlighted when four companies account for 85% of the fed cattle slaughter.

"There is a widening gap between those giant players and the small and medium-sized processors that many local farmers and ranchers rely on," said Sen. Debbie Stabenow, D-Mich., chairwoman of the Senate Agriculture Committee.

Stabenow pointed to the price problems that hit with the Tyson fire in Holcomb, Kansas, in 2019, followed up by the pandemic shutting down plants in spring 2020 that cut processing by 40% at one point, then a cyberattack against JBS earlier this month that briefly halted roughly one-fifth of U.S. meat-processing capacity.

Beyond multiple calls for Department of Justice investigations and tighter enforcement of the Packers and Stockyards Administration, Congress also must consider reauthorization of the Livestock Mandatory Reporting Act (LMR). Changes to the LMR could open up more price discovery, especially if a library is created showing what price benefits were offered under alternative marketing arrangements (AMAs) such as formula pricing. Congress also has oversight for USDA's implementation of $4 billion in funding to improve resiliency in the food supply chain.

Sen. John Boozman, R-Ark., noted changes in the way cattle producers market their cattle have led to improvements in grading as with as much as 85% of beef produced now graded as Choice or Prime compared to 50% back in 2007. Boozman noted the industry often takes time to adjust to cycles involving packing capacity and the size of the cattle herd.

"The nature of the beef cycle dictates that the industry is slow to adapt," Boozman said.

Boozman, though, also cautioned against "the threat of regulatory overreach" -- as USDA has announced plans for new livestock marketing rules. Boozman said regulatory changes lead to both intended and unintended consequences.

Alternative marketing agreements to manage risk and buffer themselves from market volatility while capturing gains in value added investment to their herds.

Justin Tupper, a cow-calf producer from St. Onge, South Dakota, and manager of the St Onge Livestock Auction, testified for the U.S. Cattlemen's Association. He made the argument that since last year packers are using slower processing speeds at plants and a tight labor market to increase their profitability.

Tupper's testimony was countered by Mark Gardiner, a cattle producer from Ashland, Kansas, testifying for the National Cattlemen's Beef Association. Gardiner was among the producers who started U.S. Premium Beef to create a vertically integrated beef market. He pointed to some of the problems such as a bulge in cattle supply while packing capacity has faced a spate of unusual market disruptions.

"We have too many cattle and too little processing capacity," Gardiner said. "We have a volatile marketplace created by outside unavoidable factors, not any one market player."

History shows there will be a point when packers adding process capacity will find themselves competing for a limited supply of cattle and producers will have more leverage, Gardiner said.

Gardiner defended producers who sell through AMAs and have focused over time on changing genetics, feed and management to improve the quality of their cattle and their prices as a result. Gardiner opposed bills that have been introduced by multiple senators that would mandate as much as 50% of packer cattle buys come from cash market sales instead of AMA contracts. Gardiner said such proposals would damage the market and potentially artificially manipulate prices.

" Experience tells us the unintended consequences of these actions can create longer-lasting havoc and even greater volatility to our industry," he said.

As far as daily cash trade prices, Gardiner said, "I look at this as a base price, no different than the commodity of wheat."

Glynn Tonsor, an agricultural economics professor at Kansas State University, told senators the U.S. cattle industry "is arguably the country's most important agricultural sector," adding the sheer size of the industry must be appreciated before any proposed policy changes that would potentially have wide-ranging impacts.

Tonsor also repeated during the hearing he opposed any mandate for higher negotiated cash trade, which would disrupt the growth of formula contracts during the past decade. Market mandates add rigidity into the system, he said.

"Any kind of government mandate gives me that pause," Tonsor said.

Dustin Aherin, a vice president and animal protein analyst for Rabobank, said market signals led to record cattle prices and packer losses in 2014 and 2015, which drove some inefficient packing plants out of business. Going back to 2000, the beef industry saw a decline of roughly 14,000 head per day in processing capacity.

"That negotiated cash trade level really hasn't changed," Aherin said. What has changed is the supply of cattle relative to demand. But processing capacity matters.

"So while there may be great consumer demand in today's market, it's not necessarily trickling down to the cattle feeder in the same way it did in 2014 because of the oversupply of cattle relative to packing capacity, and that is going to change over the next several years," said Aherin.

Aherin also noted that if all of the plant expansions being unveiled in recent months were to come to fruition, then roughly 8,000 head of fed-cattle capacity could be expanded within five years, and nearly 2,000 head of non-fed cattle as well.

"If cash were mandated in this situation, it would severely hamstring the ability for these smaller regional plants that are likely going to have to compete in these niche markets, to differentiate themselves from the larger, more efficient incumbents," Aherin said.

MARKET OUT OF WHACK

Senators, though, questioned how the market could be so out of whack for smaller producers. Sen. Chuck Grassley, R-Iowa, noted roughly 60% of the cattle trade in Iowa is based on cash sales. If the cash market remains thinly traded, but is the basis for the formula contracts, then Grassley said producers in his state are being hurt.

"That is going to demand action from this Congress to take care of that unfair situation," Grassley said. He added, "When the big four can have all of that captive supply so they don't have to go out and compete for those cattle, then they can push down the prices," he said.

Tupper agreed producers in Iowa and a few other states selling high volumes of cash sales "are shouldering the burden for everyone else." Greater competition for packers having to bid on cattle would give producers more of an opportunity to benefit when boxed beef prices are trending higher, he said.

"If we had more competition out there and they could not hold captive supply, then when we have high boxed beef prices, we would see the direct benefit of that," Tupper said.

Mary Hendrickson, a sociology professor at the University of Missouri, said the levels of concentration in the packing industry now rely on efficiency and specialization. Those benefits of scale have broken down by some of the recent events.

"Everybody keeps saying these are black swan events, but they happened, and we weren't really prepared for them," Hendrickson said.

Sen. John Thune, R-S.D., questioned how the supply and demand argument fit when producers are going out of business while packers are receiving strong profits.

Tupper said packers are controlling chain speed, shackle space and the price out the back door for their beef. In every cycle, small producers are lost while the large packers "get filthy rich and we squeeze out the small guy," Tupper said.

A small feeder can be told if they don't accept a bid for cattle then they would not have shackle space for those cattle. That's due to the lack of multiple bidders for cattle, Tupper said.

"The only way you can have true price discovery is to have a second bidder," Tupper said.

Deb Fischer, R-Neb., a cattle rancher, said she saw smaller and regional packing facilities that closed over time, and she recognized nobody could have foreseen the Holcomb fire or the pandemic.

Fischer also said she saw the merits of AMAs, and noted the need to have a library of AMAs as part of the price-reporting reauthorization so producers can understand how others are marketing their cattle. Still, the AMAs rely on the cash trade too.

"I think the cash sales are important. They provide information to those who are using AMAs," Fischer said, adding the cash trade offers a base for market sales.

Sen. Cindy Hyde-Smith, R-Miss., also a cattle producer whose family has operated a cattle auction since 1941, said she has received hundreds of calls about the current market challenge for producers. She noted the cow-calf producer selling to an auction doesn't have the benefit of an AMA with a packer.

"They don't have a seat at this table," Hyde-Smith said, adding, "And they are being treated very unfairly right now."

Tonsor, asked repeatedly about what changes are needed to the price-reporting law, said more information needs to be gathered, and a contract library is feasible as long as it protects confidentiality.

"I think there are ways to do that without mandates on certain cash negotiated markets," Tonsor said.

Tupper said a contract library "would be huge" to know what provides the premiums in AMAs and determine what the true price is for those cattle sold. Gardiner also agreed more information in the price reporting for packers would benefit producers.

"If we have this robust price discovery, true supply and demand will go forward," Gardiner said.

The full hearing can be watched at https://www.agriculture.senate.gov/… 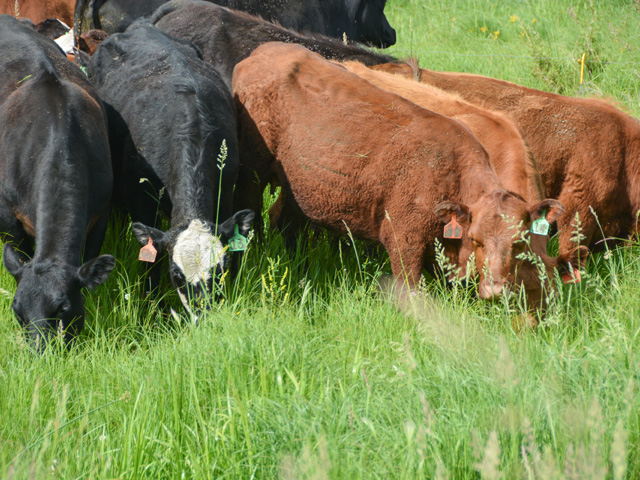