GLENWOOD, Iowa (DTN) -- The chairman of the House Agriculture Committee on Thursday called on the White House Coronavirus Task Force to help deal with the growing crisis facing pork producers.

Rep. Collin Peterson, D-Minn., wrote to Vice President Mike Pence, "Because of COVID-19, many of America's pork producers have no access to processing and have no choice but to depopulate their herds." Peterson added that the Trump administration needs to begin a "robust federal response to address this dire situation."

The United Food and Commercial Workers (UFCW) Union cited nationally at least 13 packing plants that employ its union workers now have experienced closures, affecting 10% of beef production and 25% of pork production. That does not include packing plants with workers from other unions, or non-union plants.

The Centers for Disease Control on Thursday also issued a report citing its health and safety recommendations for Smithfield Foods to reopen in Sioux Falls, South Dakota. The CDC cited one of the major problems in providing information to workers is that Smithfield workers at the plant speak roughly 40 different languages.

The UFCW also sent a letter to Vice President Pence calling on federal action. At least 13 union members have died and roughly 5,000 have been either infected or exposed to the coronavirus.

The packing plant situation has led to significant market disruptions in beef and pork, even as grocery shelves have routinely been wiped out because of high demand for the products. Pork producers estimate they will lose roughly $5 billion this year, while cattle industry losses are estimated to range from $13 billion to $14 billion.

In the last few days, pork producers, as well as state and federal officials, have mentioned the growing likelihood of pork producers using euthanasia on unsold hog herds.

One of the biggest problems facing packing workers is a lack of a uniform set of national standards to protect workers, said Marc Perrone, international president of UFCW.

"In every state, they have been deemed as essential workers, but they haven't been given the essential protection that they so desperately need," Perrone said.

Perrone criticized the federal response for "not issuing clear and concise guidelines" to the companies to ensure workers are safe. He said government officials need to recognize the food supply depends on these workers to ensure it is sustained.

"Unless immediate changes are made, America's food-processing and meatpacking workers are in danger, and so is America's food supply," he said. Perrone later added, "Every time a plant closes, it has a direct impact on our food supply."

"That many birds traveling that fast in that line absolutely restricts your ability to have social distancing," Perrone said.

The union isn't the only one calling on packing plants to slow down the processing. In Minnesota on Thursday, Labor and Industry Commissioner Nancy Leppink also said plants need to slow down their lines, sequence shifts and ramp up testing for workers.

SOME IMPROVEMENT IN PLANT CONDITIONS

Plant workers on a call with reporters Thursday also talked about conditions at their plants. All of them said companies over the past month have improved conditions to encourage social distancing, check temperatures and provide PPE gear -- though some of the masks provided were not actual protective gear. But the workers, who each work in plants with thousands of employees, continue to operate in tight quarters.

"Every one of us in this plant is nervous and having anxiety going to work every day because of the kind of work we do and how many people we are around during the day," said Rhonda Trevino, a 25-year employee at a Cargill beef plant in Texas. The plant processes 2,500 cattle a day.

Margarita Heredia, an employee at a JBS pork plant in Marshalltown, Iowa, credited JBS with installing hand sanitizers, bleaching the work environments and communicating with employees.

"They are doing a really good job of trying to separate people," Heredia said.

Achut Deng, an employee at Smithfield in Sioux Falls, South Dakota, tested positive for coronavirus and became ill. Deng said she was trying to take care of three children while also trying to keep social distancing while ill. One of her children came down with the virus as well.

Deng said she was frustrated state and local officials are criticizing refugees and immigrants who work in the plant.

"At my workplace, people are working shoulder to shoulder," Deng said. She added, "I got it as a single mom at home with my three kids. It had nothing to do with being an immigrant."

"We strongly recommend our members do not take part in that study," Perrone said.

Itzel Goytia, a Cargill beef employee in Dodge City, Kansas, said she thinks the cautions about coronavirus came late and there is not enough PPE gear. Social distancing also is impossible in some parts of the plant, she said.

"I know there are many meatpacking workers who do not have enough PPE and this just has to change," Goytia said. She added, "I'm hoping the federal government understands how important it is to keep us food workers safe."

Ricketts said at a press conference Thursday that he would not shut down plants.

"I don't foresee a scenario where I would tell them to close," he said.

Peterson, in his letter to Vice President Pence, called on the federal task force to provide assistance to famers, including developing standards for humane euthanasia of affected animals as well as financial and technical assistance to producers. Peterson also called on the federal government to provide resources to minimize supply disruption. That includes issuing federal guidelines to packing plants to prevent transmission of COVID-19. Peterson also called for adequate testing and PPE for plant workers and federal meat inspectors as well.

"Without fast action and clear coordination, this situation will only get worse, not just for pork producers but for other livestock and poultry producers as well," Peterson added 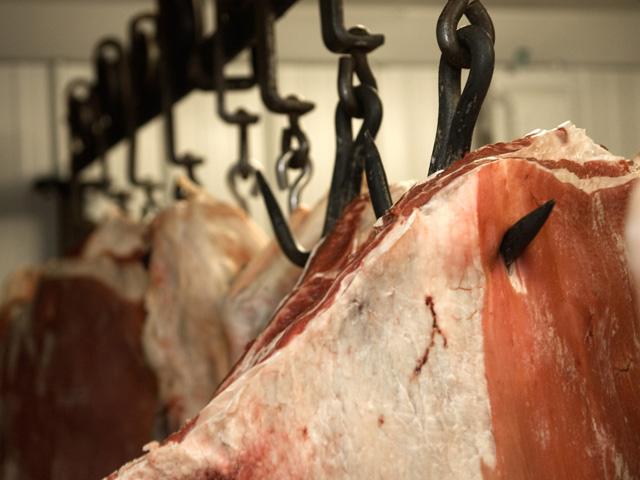