ATLANTIC, Iowa (DTN) -- A cow having difficulty calving (dystocia) is a stressful time for everyone involved. Proper management, however, at this time can make an often tough situation much less difficult.

This was the message from two presenters at the Southwest Iowa Cow-Calf Short Course held in Atlantic, Iowa, on Jan. 27. An estimated 75 producers attended the one-day course.

Cow-calf producers need to remember they are assisting a cow in the calving process, which takes some time, according to Tyler Dohlman, a veterinarian and Iowa State University College of Veterinary Medicine assistant professor. Take your time and let the animal take its time as well, he said.

As long as the umbilicus is intact, the calf is okay and there is no need to rush the cow along, he said.

In addition, Dohlman told the producers in attendance that all chains and instruments used to assist in the calving process need to be as clean as possible.

"Do not be a hero, know your limitations and know when it's time to call your vet," Dohlman said.

Dohlman said there are three stages of labor.

Stage one lasts two to six hours and consists of mild contractions and preparation for fetal delivery. Typically, cows will separate themselves from pen mates or the herd at this point, he said.

The second stage, which lasts from 30 minutes to two hours, consists of strong contractions, fetal membranes breaking (breaking of the water bag) and then fetal expulsion. In mature cows this stage could last 30 to 60 minutes while in heifers this could last 60 to 120 minutes.

Avoid any disruptive noises or moving animals once stage two labor begins, he said. Once into stage two of active calving, cattle should be monitored every 30 minutes to one hour.

Dohlman said if waterbag breakage is confirmed, a one-hour time frame should be given before any intervention is used. Progression should occur every 20 minutes from front limbs appearing, to front limbs with the head present, to the rest of the calf.

The third and final stage includes the passing of the fetal membranes (placenta). This stage could last from six to 12 hours, he said.

Dohlman said intervention in the calving process should only be done in certain situations: This includes if there is no progression after two, 20-minute time intervals, stoppage of strong contractions after the allotted time frame, and abnormal signs of calf presentation (toes pointed up, only one limb, etc.)

If assistance is needed, there is proper etiquette that should be followed, he said. This would include proper restraint of the cow, appropriate cleanliness and hygiene, and appropriate usage of calving equipment.

One of Dohlman's pet peeves when it comes to calving is proper chain placement.

There should be two points of pressure on each leg, one just above the fetlock joint and another just under the dewclaw, he said. These points will put less pressure on a calf's legs than attaching the chain at just one point.

"You are not leaving this meeting until you know the proper chain placement," he told the producers.

In addition, producers need to assess the three Ps when it comes to calving -- presentation, position and posture of the calf, as well as cervical dilation.

At this point you will need to proceed with your comfort level with manipulation and extraction or call for veterinary assistance, Dohlman said.

Everyone has different experiences with pulling calves and so the point in which a vet is called can vary. Some producers may not be comfortable with a backwards calf, for example, while others might be willing to assist a cow in this situation, he said.

Once the calf is born, there are certain practices that need to be done to get the calf off to a good start, according to Nate Hansen, a veterinarian at Anita Vet Clinic located in Anita, Iowa.

The most important aspect of newborn calf management is getting the calf good quality colostrum. It starts with their mamas; veteran cows are generally better than heifers in producing colostrum, he said.

A 75-pound calf will need two to three quarts of good quality colostrum in the first 12 hours of its life. Calves tend to take multiple little "meals" during this time, probably only consuming small amounts each time, Hansen said.

There are colostrum replacers and supplements available on the market if you feel a calf has not gotten enough. In some cases, tubing a calf might be necessary to deliver colostrum, he said.

"Tubing a calf can be a tough process making sure you get colostrum in the right place," Hansen said.

Other newborn calf management practices can include spraying the navel with iodine and treating calves for diseases such as scours and pneumonia. It is important to catch these diseases early for more efficient treatments, he stressed.

Hansen said processing calves, regarding castration, can be handled in several different ways. He has producers who band calves at birth, some who band at around 90 days old and some who will cut calves at weaning time.

His personal preference would be to band the calves earlier than later. While some producers do not like this practice, it is much easier on the calves than having to castrate later in their lives, he said.

"They don't even know they had them," he said. 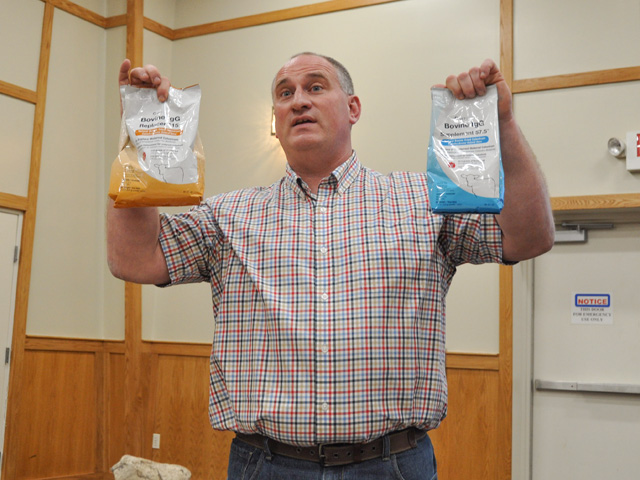