Short supplies of good-quality forages because of higher-than-average rainfall in recent growing seasons have limited the hay supply in most Midwest locations. This caused prices to climb. (See more on that at: https://www.dtnpf.com/…)

There are different practices to make forage supply last longer. These methods could include feeding hay to similar-aged cattle to limit waste, or even supplying alternative feed.

"You are testing hay mainly to see where energy levels are with the hay," Harty said. "In cold temperatures, cattle's energy requirements go up, and thus the hay fed needs to be good enough to meet these needs."

In some cases, supplemental energy will need to be fed to cow-calf pairs, and this could be in the form of corn, wheat middlings, distillers dried grains (DDG), soy hulls and beet pulps. Corn and DDG are readily available in many areas, while the other feeds might be more difficult to obtain, she said.

These feeds will help cattle meet their energy requirements, as well as provide higher levels of fiber.

Limited availability of quality hay has led some cow-calf producers to find different sources of feed.

Mike Berdo, a Washington, Iowa, farmer and cattle producer, said he has fed more corn silage to his cattle over the last two to three years. This has been partially because of lower hay quality and also because of plenty of corn available.

"We have seen our cows have better body condition scores due to feeding some silage," Berdo said.

Berdo plans to feed silage via a feeder wagon daily. His cattle will get 30 pounds of silage per head per day, he said.

Winter weather over the last few winters has been fairly extreme, and feeding cattle in these condition has been a challenge, he said. Adding silage helps to keep the cattle fuller, he said.

Another way to make hay supplies stretch is to alter hay's form. Harty said processing (or chopping) hay makes all of the hay pieces shorter, so cattle have a more difficult time picking through and only eating part of the hay.

The cattle eat more of the hay, and thus, waste losses are minimized, she explained.

"We are short corn this year with all the prevent plant acres, so we will be feeding more DDG," Culver said.

Normally, he tries to feed his bred cattle three to four pounds of corn per day. This year, it will be less because of less corn available, he said.

Culver feeds his first-calf heifers separate from his older cattle, and the younger cattle get the available better-quality hay. He grinds separate piles of forage to control mixing, he said.

"The mixer wagon with distiller and silage makes almost any bale usable," he said.

Harty said another option is to limit feeding cattle in dry lot situations. In this practice, cattle are fed 75% of ration-balancing programs and still maintain weight.

Harty is limit-feeding cattle in dry lot situations. Every other day, she feeds 80 pounds of a balanced ration with the correct amount of protein and energy, she explained.

"The key to limit-feeding is to know forage quality and meet their nutrient requirements," she said.

Another way to feed forage more efficiently is limit waste by using some kind of barriers. Many cattle producers use feeders or panels to limit hay waste, as cattle do not have full access to the hay.

Harty said many producers in her home area of western South Dakota do not have the facilities and/or the equipment to feed cattle with such barriers. Many will unroll round hay bales on the range, she said.

North Dakota State University Extension had a press release in December, titled "Stretch Limited Hay Supplies." It can be found at https://www.ag.ndsu.edu/…. 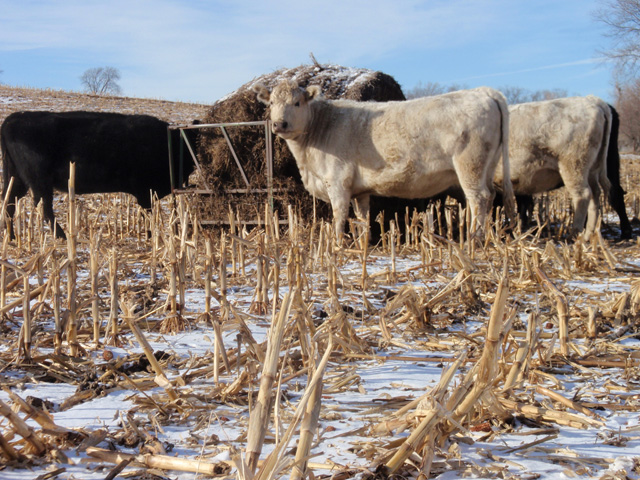