OMAHA (DTN) -- Kimberly Meier has sold about twice as much alfalfa seed this spring as she normally does.

Her region of northern Illinois saw high rates of alfalfa winterkill this spring after a winter of colder-than-normal temperatures. The Ridott, Illinois, farmer and seed dealer said, because of that, she sold about 120 bags of alfalfa this spring, while a normal season would be closer to 60 bags.

"We had bad winterkill in this area this year," Meier told DTN. "And it's whole fields -- I have never seen it this widespread."

The condition of forages across the Midwest is about as diverse as the region itself. The cool, wet spring has afforded ample moisture to most areas, which should be good news when the weather finally warms up, but which has also slowed growth of many forages, potentially affecting overall yields.

Alfalfa winterkill seems to be an issue this spring throughout Wisconsin and stretching into surrounding states such as northern Illinois and eastern Minnesota.

Meier said the situation started last fall with extremely wet conditions followed by warm temperatures in January. Then, that was followed by extreme cold in February. While they did have some snowfall around Christmas, most of the snow was melted in the January warmup, exposing the alfalfa plants to the cold during February.

From talking to agronomists in the area, most seem to believe this is why the region has seen higher incidents of winterkill, Meier said. The fields most affected appear to be newly seeded field and older stands.

Meier said alfalfa producers in her area often flirt with danger by taking a last cutting in the fall and not allowing for much regrowth before winter hits, which can weaken plants and lead to winterkill. This appears to be a growing season in which squeezing in that last cutting may have not paid, she said.

"This is a tough deal, as around two-thirds of the alfalfa is gone now," she said. "There is going to be even less forage available, as most will only get one or two cuttings with the spring-seeded alfalfa."

The University of Wisconsin published a report evaluating and managing alfalfa stands with winterkill. It can be found at: https://fyi.extension.wisc.edu/….

Other areas appear to have escaped widespread alfalfa winterkill. Jared Goplen, a University of Minnesota Extension crops educator from Morris, Minnesota, said the alfalfa situation in western and central Minnesota is generally OK, for the most part.

Winterkill appears to be contained to hilltops and valleys. Most fields in the area were covered in snow most of the winter, which would have protected crown roots from the cold. There may have been some ponding in fields for an extended period of time this spring, so some low spots may have been drowned out, he said.

"Overall, I would say a majority of the alfalfa fields have some level of winterkill and drown-out areas, but the bulk of fields are growing well," Goplen said.

The situation is similar farther to the west in North Dakota. There wasn't much winterkill in alfalfa there thanks to plenty of snow that insulated the crop from extremely cold temperatures, according to Marisol Berti, North Dakota State University Extension forage and cover crops specialist.

What the cold spring has done is slowed alfalfa growth somewhat. Most of the crop in the state is not even 6 inches tall, which will delay first cutting, probably into mid-June or even later if it stays cold, she said.

"That is about two weeks later than normal for first cut alfalfa," Berti said. "I am sure some farmers have already run out of hay to feed cows, so this delay will affect them."

Farther to the south and west, forages are also somewhat behind normal in growth.

Seth Wilbanks, a livestock and grain farmer from Hughesville, Missouri, said his forages are delayed with the cool conditions seen this spring. He said, last year around this time, he began to cut some grass hay. However, this year with the increased amount of moisture and the shorter crop, he doesn't think much hay will be harvested anytime soon.

Fescue is a popular grass for Missouri forage producers. Normally, by late May, the crop is headed out and about knee high. This year it is considerably shorter, Wilbanks said.

Despite concerns about a delayed crop, Wilbanks believes his forage crops could end up yielding close to average -- and maybe even above average -- thanks to the plentiful moisture. Last year, his central Missouri area suffered through a severe drought, he said.

"Once it does get warmer, I think we are going to more tonnage with maybe some issues with quality," said Wilbanks, who grows corn, soybeans and several different types of forages for his cow-calf herd.

Perennial forages in Nebraska will be grazed later than normal, said Bruce Anderson, University of Nebraska-Lincoln (UNL) Extension forage specialist. Yields on cool-season grasses could be lessened some due to the cold spring.

"I think these cool-season grasses could really be short this year," Anderson said.

On the plus side, warm-season grasses in the state could see great growth once the temperatures begin to rise. Soil moisture levels are high, so when the heat comes, yields should be fairly decent, he said.

Some farmers in Nebraska face a challenging growing season after devastating floods tore through the state in mid-March, destroying fences and depositing large amounts of sand on pastures and hay fields.

Anderson said he fielded many calls from livestock and forage producers this spring who face limited or no forage production. In many cases, farmers affected by flooding may turn to annual forages on acres not flooded, he said.

The most common cool-season small grain for forage is oats, but others such as cereal rye, triticale, wheat and barley could be planted. Warm-season forages that could be planted include sudangrass, sorghum/sudangrass, forage sorghum, pearl millet and German (foxtail) millet.

Other plant species, such as brassicas, can be used for summer annual forages. This would include plants such as forage radishes and turnips.

After the floods in mid-April, DTN wrote an article about choosing the right forages for your operation. To read the article, visit: https://www.dtnpf.com/…. 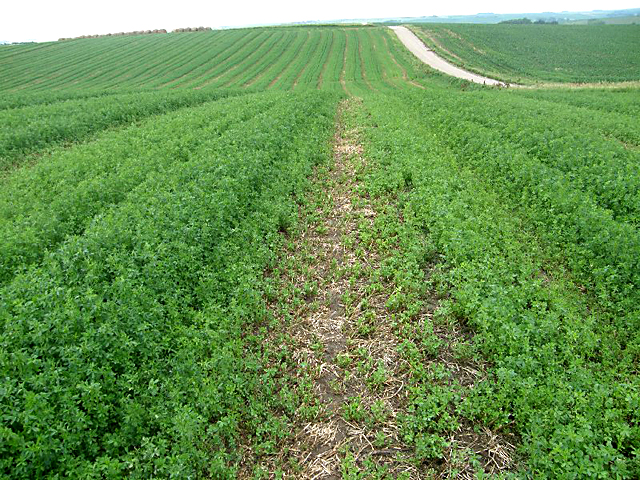