OMAHA (DTN) -- Nebraska livestock producers who saw their pastures severely damaged from widespread flooding this spring might have to use annual forages until perennial forages can recover.

With pastures now buried under feet of sand along flooded rivers and fences completely destroyed, it will be a long-term project to restore these areas to productivity. Some pastures, however, might not recover enough to be whole again.

At a meeting in Fremont, Nebraska, on Tuesday afternoon, University of Nebraska-Lincoln (UNL) Extension specialists spoke on the subject of growing annual forages. The need for forages by livestock producers affected by flooding is both an immediate and longer-term need, according to Nathan Mueller, UNL Extension Agronomist for Dodge and Washington counties.

Many farmers in the two counties have seen widespread flooding from three major rivers (Missouri, Elkhorn and Platte) and several smaller streams (Bell Creek, Logan Creek, Maple Creek). The questions Mueller has gotten most from livestock producers since the flood in mid-March is how to grow forage on flooded land and what other alternative options are available to them.

"Some have pastures with feet of sand deposited on it and no fences," Mueller said. "They are going to need forage and hopefully this meeting will give them options."

Daren Redfearn, UNL Extension Forage Crop Residue Specialist, said many forage producers have contacted him and they wanted to know what to do with sand on pasture land. It can be very costly to remove the sand mechanically, but at the same time, what plants could possibly grow with so much sand deposited on pastures.

"At some point something will grow, mostly likely some annual like sunflowers," Redfearn said. "Do you remove the sand or plant on it? I don't think we really have a good answer yet on what to do."

Another issue will be how much sand is out there and how thick it really is. Some areas might be 4 to 5 feet thick while other areas will not. This inconsistent depth will be a challenge to overcome, he said.

The good news is grass will grow again but it will take some time. In the meantime, livestock producers need forages and growing annual forages could be one way to assure this need is met both short- and long-term.

Redfearn said livestock producers in need of forages have a lot of choices when it comes to growing different annual forages. Certain seed might be more difficult to obtain but generally most of the seed is fairly available.

Annual forage would be divided up between cool-season and warm-season species, he said. Cool-season forages could be small grains such as oats, cereal rye, triticale, wheat or barley. Brassicas would also be cool-season and would include turnips, radishes and rapeseed.

Redfearn said the most common cool-season small grain is oats, which could be planted in the fall or early spring. With oats you can stockpile the forage and quality doesn't drop much, he said.

Brassicas can be planted in the fall or the spring, although production is higher when it's planted in the fall, he said. With it already being well into April, it is getting almost too late to plant oats or any cool-season annuals.

Warm-season forages could be summer annuals such as sudangrass, sorghum/sudangrass, forage sorghum, pearl millet and German (foxtail) millet. Other examples of warm-season annuals could be sunflowers, cowpea, Mungbean and Sunn hemp.

"My take-home message is planting dates with annual forages is important," he said. "Delayed planting reduces fall growth potential and the effects of late fall planting carry over into the spring."

From the livestock side, annual forages have different feed values, Kristen Ulmer, UNL Extension Educator in Beef Systems. Dovetailing on what Redfearn said, planting dates are extremely important, she said.

Research at the UNL Eastern Nebraska Research and Extension Center (ENREC) near Mead has shown this to be true.

"It can make a huge difference in production even as little as two weeks," Ulmer said.

Feeding value of annual forages can be maintained during the winter and meets calf and gestating cow requirements for protein and energy. Research has shown an oat, radish, turnip mixture planted on Sept. 8 will have a crude protein level of 23.2% in November and 22.9% in December.

Ulmer said calf performance on annual forages have also been studied at UNL.

Other considerations when grazing annual forages would be metabolic disorders with livestock.

Ulmer said all annual grasses can have nitrate toxicity issues. Prussic acid can be seen with using sorghum, sudan grass, sorghum/sudan mix and corn as a forage. She said issues with prussic acid can be avoided if grazing isn't allowed until the crop is 18 inches tall and waiting seven days after a killing frost.

Grass tetany can be an issue with lush, immature grasses, she said. The main concern here is with lactating cows but in most cases feeding a free-choice mineral with 12% to 15% magnesium (mg) with a target of three to four ounces per day/head will take care of the problem. 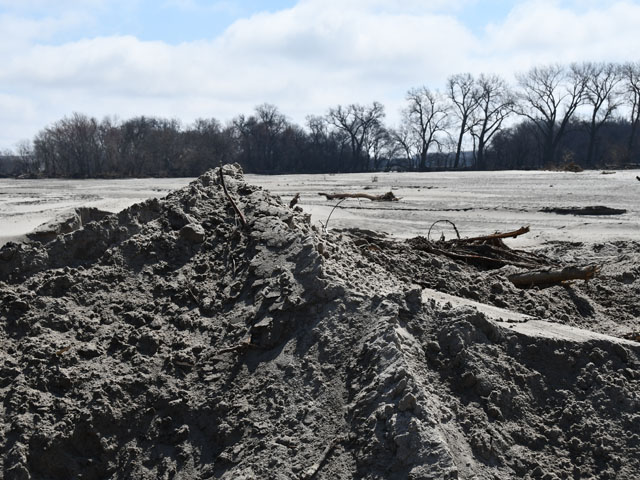