OMAHA (DTN) -- Hay prices across the Midwest are considerably higher compared to last year at the same time and could climb even higher in the next couple months.

Several factors, including lower yields during last year's growing season and higher demand this winter, are behind the rising prices, experts say.

Prices could climb even higher in the coming months as buyers attempt to secure enough hay to finish out the feeding season, according to experts.

Hay prices have skyrocketed since last spring, according to Dale Leslein, manager of the weekly hay auction at the Dyersville Sales Co. located in Dyersville, Iowa. In some instances, hay prices have increased as much as 300% in the last 12 months.

Expensive dairy-quality hay has pushed up the value of the next lower level quality of hay (just below that of dairy quality) as people look to buy less-expensive hay, he said. Most hay in this range is running from $150 a ton on the low end to $200 a ton on the high end.

Even low-quality hay has "skyrocketed," according to Leslein.

Leslein said, at one point hay prices were up for 27 consecutive weeks beginning last May. Interest in hay has also increased in the last 12 months. Last year, only about 70 people were attending his hay auction, and now it is probably closer to 200 people, he said.

The USDA Nebraska Hay Summary, released on Thursday, March 1, stated prices were up about $5 per ton from last week's report, and demand was good to very good across the state with quite a few out-of-state buyers trying to purchase hay.

"Several contacts stated on this week's call they are sold out of hay," the report said. "Hay clearance hasn't been this good in Nebraska since 2012-2013 when a big area of the Midwest was dry."

The USDA South Dakota Weekly Hay Summary, which came out on Friday, Feb. 23, reported all classes of hay were steady with the previous week. The demand for hay is more active in the western half of the state compared to the eastern half.

"More inquiry reported from West River as hay supplies are more limited," the South Dakota report stated. "Dairy operations are struggling with low milk prices and are looking for ways to reduce their feed expenses."

Lindquist said after the first cutting of alfalfa during the last growing season, it was looking like the state would have plenty of forage. However, the southern half of the state saw dry weather while the northern half saw too much rain the rest of the growing season.

"These weather events, compounded by the lower total acres in Michigan that had occurred over the last five years (hay stocks were down nearly 17% from the previous year), have taken away the large hay surplus in rapid fashion," Lindquist wrote.

There are several reasons why hay prices have climbed so dramatically over the year, Leslein said. The Dyersville hay auction is a nationwide auction with buyers and sellers in 25 states and as far as away as Canada.

Leslein said chief among the reasons for the current market situation was the uncooperative weather, which has limited the supply of hay he sees at his weekly hay sales.

A severe winterkill problem took out quite a few acres of alfalfa in northeastern Iowa and into Wisconsin this past spring, which lowered production there. Drought also trimmed production in areas such as southern Iowa, the Dakotas and into Montana last growing season, he said.

"Another reason would be the wildfires in the Southern Plains last spring," Leslein told DTN. "There was quite a bit of hay lost in those fires."

Doug Shoup, an agronomist at the Kansas State University Southeast Research and Extension Center located in Parsons, Kansas, said yet another reason for higher hay prices could be the fact that winter this year has been fairly cold and snowy in many Midwest locations. This has forced livestock producers to feed more hay, which upped the demand for the feed, he said.

"Even down here in southeastern Kansas it has been a cold winter," Shoup said. "I would say we had average hay production last year, so the weather conditions now might be why prices are rising."

On the plus side, Shoup said, recent rains should allow the region's forages to get off to a good start when they begin growing this spring. There will be some decent moisture to get cool-season grasses off to a good start, he said.

Leslein said other reasons for such a large demand include more hay being exported to countries such as Saudi Arabia and Midwestern farmer/feeders wanting to "walk their corn to town" by purchasing more livestock to feed while corn prices are low. More cattle to feed also means greater demand for other feed sources such as hay.

Leslein said he expects hay prices to peak probably in April and May as many livestock operations begin to run out of hay supplies.

"I had someone tell me recently that you don't want to be a buyer in April this year," he said.

The hay market should remain fairly firm through early June, Leslein speculated. Then, wherever the market goes from that point forward will depend on what kind of forage production is seen during the rapidly approaching growing season.

Leslein did point out that 19 of the 22 continental states west of the Mississippi River all are experiencing different levels of drought. Any hay production issues similar to last growing season could keep hay prices on the high end, he said. 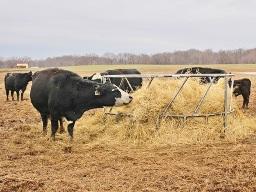