BISMARCK, N.D. (DTN) -- Scattered thundershowers across North Dakota on Wednesday brought a slight respite to the region's drought, but farmers and ranchers say some crops are already lost and it would take months of rainfall to rebuild pastures.

Dryland corn from central South Dakota up through North Dakota normally would be 6-feet tall by now, but crops are grossly stunted. Some fields are tasseling at just 3-feet tall, while in other fields the stalks are already browning with no signs of tasseling. Soybean fields are similarly stunted, but crops such as soybeans and sunflowers more likely will benefit if rains continue.

"We saw light showers with locally heavier favoring southwest North Dakota through northern and eastern South Dakota over the past 24 hours," said DTN Senior Ag Meteorologist Bryce Anderson. "Most of the showers produced no more than .50 inch. Drought easing will only be short-term. There is not much follow-up rain in the forecast through the end of the week, either, although temperatures will be less hot than we've seen during July so far."

Mark Watne, president of the North Dakota Farmers Union, has been touring parts of western North Dakota this past week to talk to producers about the farm bill. The farther north and west, the worst the conditions are for farmers and ranchers, he said.

"It's a crisis. It's way more than people think. I've driven through areas where you would expect to see a spindly wheat stand, but there's no crop left -- it's gone," Watne said. "It's almost hard to tell what they did out there."

Driving through South Dakota, nearly every open roadside ditch along state highways is now baled. Most cattle producers in western North Dakota have seen their pastures dry up and there is little hay in the area. Any bare nook or cranny -- or piece of grass -- is getting cut up for hay.

USDA has opened up the Conservation Reserve Program for haying, but there are growing complaints that landowners are charging exorbitant prices for hay coming off that CRP ground. "I've heard some of those complaints," Watne said.

Ranchers used up a lot of their reserve hay in the winter when North Dakota was hit with about 75 inches of snow that required ranchers to feed their cattle more. That took out some of the hay they might otherwise still had to use.

Adnan Akyuz, North Dakota's state climatologist, said this week that the state is facing its worst drought conditions since 2006. The U.S. Drought Monitor on July 20 showed about 6% of the state is now in an "exceptional drought," the worst ranking offered by the drought monitor. http://droughtmonitor.unl.edu

Steve Perdue raises spring wheat and durum near Ray, North Dakota in the northwest corner of the state. Some of Perdue's crop won't be harvestable, especially the later-seeded crop. The earlier-planted wheat might pull out some bushels, he said.

"I think this year in North Dakota, at least in the western half, probably two-thirds of South Dakota and the eastern half of Montana, we're seeing what crop insurance means to the farmers," Perdue said. "Our crop insurance program is not adequate. It doesn't get us where we need to be, but it gets us a whole lot better than zero or trying to get through this alone."

Perdue agreed that in the next farm bill he would like to see crop insurance enhanced. "We can't withstand any more cuts to crop insurance," he said.

Perdue said the 70% level of insurance normally works, but the subsidy level declines quickly and it becomes a lot more costly to buy up coverage. He does carry the Harvest Price Option and expects he will benefit there from the higher spring wheat prices.

The crop insurance coverage levels that farmers can afford is a concern for Watne. The 70 to 75% level might cover operating expenses, but leaves little for covering any family expenses. Farmers who have burned into their equity, or are younger and may have little equity with the bank, face mounting struggles, he said.

"If we could somehow get 80 to 85% coverage I think that would make a big difference, but it's going to have to be subsidized more," Watne said.

Watne also would like to see Congress consider a disaster package to help with the drought losses, but he recognizes that Congress has turned against disaster aid over the last decade.

Wes Niederman, a rancher from Morristown, N.D., said his pastures so far are manageable because he's cautious not to overgraze them with his 400 or so cows and their calves. The problem would be next year if his ranch doesn't get more moisture because the fields that have already been grazed are not recharging.

"It looks like a hardwood floor," he said. "That's my concern going forward. People sort of have a contingency plan for this year and a lot of people are probably going to make it through this year OK because they probably had some hay left over and they are going to scrape through."

Niederman's hay crop, though, was probably one-fourth of what was expected. "Generally, we get about 2,000 bales and we got 477 out of what we cut." His winter wheat crop, though, was a loss and he ended up cutting it for hay as well.

Up until earlier this week, Niederman's ranch had gotten about 1.2 inches of rain since April. Some spots have gotten about an inch of rain this week. "So it's encouraging, but it's not going to solve things."

Others across the state, though, are already weaning calves born in March or April to try to save grass. At least some sale barns are seeing more business and have added auction days during the week as well.

"Pastures are gone and they are selling their breeding stock, which is really sad because you just can't replace that," Watne said.

Niederman also expressed some frustration over USDA programs. About three weeks ago, he got an email from USDA that said he had qualified for the Emergency Conservation Program, which would help cost-share practices such as digging a well. He has a South Dakota pasture without water because the creeks are drying up. The local Farm Service Agency office was helpful filling out the paperwork, but once the application was completed, Niederman said there was a notification that there was no money available for the program. So now Niederman will be waiting likely months for the funding to come through.

"They said it will probably be October or November before you see any dollars at all," Niederman said. "Well, in November, there aren't going to be any cattle in this pasture and it won't do many any good. I also don't think I won't find anyone to come out in November to drill a well when it's cold."

He added, "Some way, when they come out and say that you are qualified for a disaster, or whatever, the dollars should be there so as soon as I get a contractor or the project is approved, you can start and the money is there and you don't have to wait." 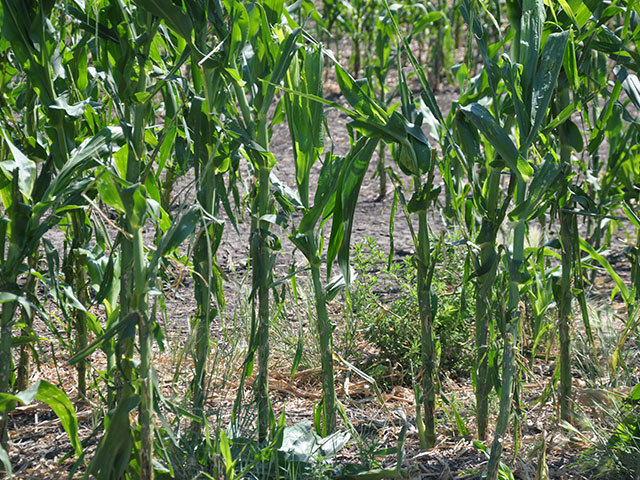