The bad news is that various challenges remain to the global fertilizer market. Top of the list is the continuing war in Ukraine, as well as some nutrient logistics concerns in the United States because of weather.

The good news is with record high prices, there was less demand globally for fertilizer in 2022: Many farmers decided not to apply P fertilizers. This situation could lead to lower P fertilizer prices in 2023.

A wild card in the P outlook in the New Year could be when or if China reenters the P fertilizer export market. There are some questions if China will ever export these fertilizers again, according to fertilizer analysts.

Chris Lawson, head of fertilizers for CRU International Limited, told DTN high P fertilizer prices have caused much demand destruction across the world. Global demand for the nutrient will be down about 10% for 2022, he said.

Because of this, the high prices and less usage caused P to be fairly well balanced as we push into 2023, he said. The world is not short on P fertilizer heading in 2023.

Basic supply and demand states more supply means less demand and that generally means lower prices. This could be the case with P fertilizer in 2023.

"While phosphorus prices are still high, I think we are going to see prices decline the rest of this year and into the beginning of 2023," Lawson said.

Samuel Taylor, inputs analyst for RaboResearch, believes farmers cutting back on P fertilizers in 2022 will be in the range of 15% to 20% for North America. This situation should allow prices to decline some in the new year.

Fundamentally this presents growers with an opportunity to perhaps purchase P fertilizer in 2023 at somewhat lower prices in 2023. This scenario has not happened over the last two years, he said.

Josh Linville, head of fertilizers for StoneX, said one fly in the ointment for U.S. farmers could be concerns with fertilizer logistics in their country.

The lower Mississippi River levels, because of the Midwestern drought, have led barges on the river to reduce their loads. Fertilizer could move up the shallower river this winter at a slower-than-normal pace if barges are only half full, for instance.

Any supply hiccups could dampen expectations of lower P prices for U.S. producers, he said.

The International Fertilizer Association (IFA) released its Medium-Term Fertilizer Outlook 2022-2026 in July 2022 (https://www.fertilizer.org/…). World P capacity in 2022 was estimated to be just under 52 million metric tons (mmt), according to IFA.

Because of the war in Ukraine, IFA presented three scenarios to reflect the uncertainty in the fertilizer market.

The three nutrients (N, P, K) have different levels of exposure to supply from the war, limiting fertilizer coming from Russia and Belarus. The phosphate market is the least exposed to capacity expansions in affected countries with new capacity in 2017 and 2021 located in Russia. However, capacity expansion in the next five years is located outside of this region of the world, IFA said.

In the optimistic scenario, IFA is forecasting global P capacity to be stable compared to 2021, while the middle ground could see a 0.4-mmt reduction and a pessimistic scenario forecasts a decline of 1.2 mmt.

According to IFA, global capacity is forecasted to rise across the three scenarios medium term, growing from 48.9 mmt in 2021 to between 50.7 mmt and 52.7 mmt across all scenarios in 2026.

There could be a noticeable decline in P consumption in 2022, according to IFA. Global P consumption is forecasted to decrease by between 0% and 7% in 2022.

Global fertilizer use is forecast to fall in 2022 but see a partial recovery in 2023. The adjusted P fertilizer capacity should increase anywhere from 1% to 3% in 2023, IFA reported.

Taylor said what is going on with fertilizer right now in Brazil could be a leading indicator of what the rest of the world might see with fertilizer supply and prices in 2023.

Brazil, which imports nearly all of its nutrient needs, currently has excessive inventories of P fertilizer. Prices for P fertilizer have dropped 20% to 30% because of the high inventories in the South American country, he said.

"This fertilizer can be re-exported to places like Southeast Asia but it shows there is no shortage of phosphorus fertilizer in the world," Taylor said.

Phosphorus import exposure is varied around the world with Latin America and East Asia more exposed to imports. Other locations such as North America and North Africa produce most of their P fertilizer domestically.

While demand might be down some in 2022, this trend will most likely change in the coming years.

Lawson said P demand will probably be fairly steady for 2023; it will be most likely higher looking forward to 2024. It really depends on the affordability of the nutrient, he said.

Another wild card to the P outlook in 2023 is if or when China reenters the P export market. China was one of the world's largest P exporters at one time, supplying about 30% of the total world trade.

When fertilizer prices skyrocketed in 2021, the Chinese government decided to ensure there was an adequate domestic supply of P fertilizer for its own farmers by eliminating exports. The initial thought was China would return to the market in mid-2022 but this situation did not occur (https://www.dtnpf.com/…).

"The cutting of exports did lead to lower domestic phosphorus prices in China," he said.

The big question remains if China ever reenters the global P export market.

Linville believes they will not. While it is often difficult to know what exactly happens in the Communist country, all signs point to the nation being self-sufficient in P fertilizer production, he said.

This situation does fundamentally change the global P market since a major world supplier no longer exists. Many nations, such as countries in Asia and Australia, will now have to find a new supplier.

Linville said it remains to be seen what effect this change has on the longer-term global P market.

"We just really don't know for sure yet," he said.

Editor's Note: This is the second of three stories in DTN's special Global Fertilizer Outlook series. 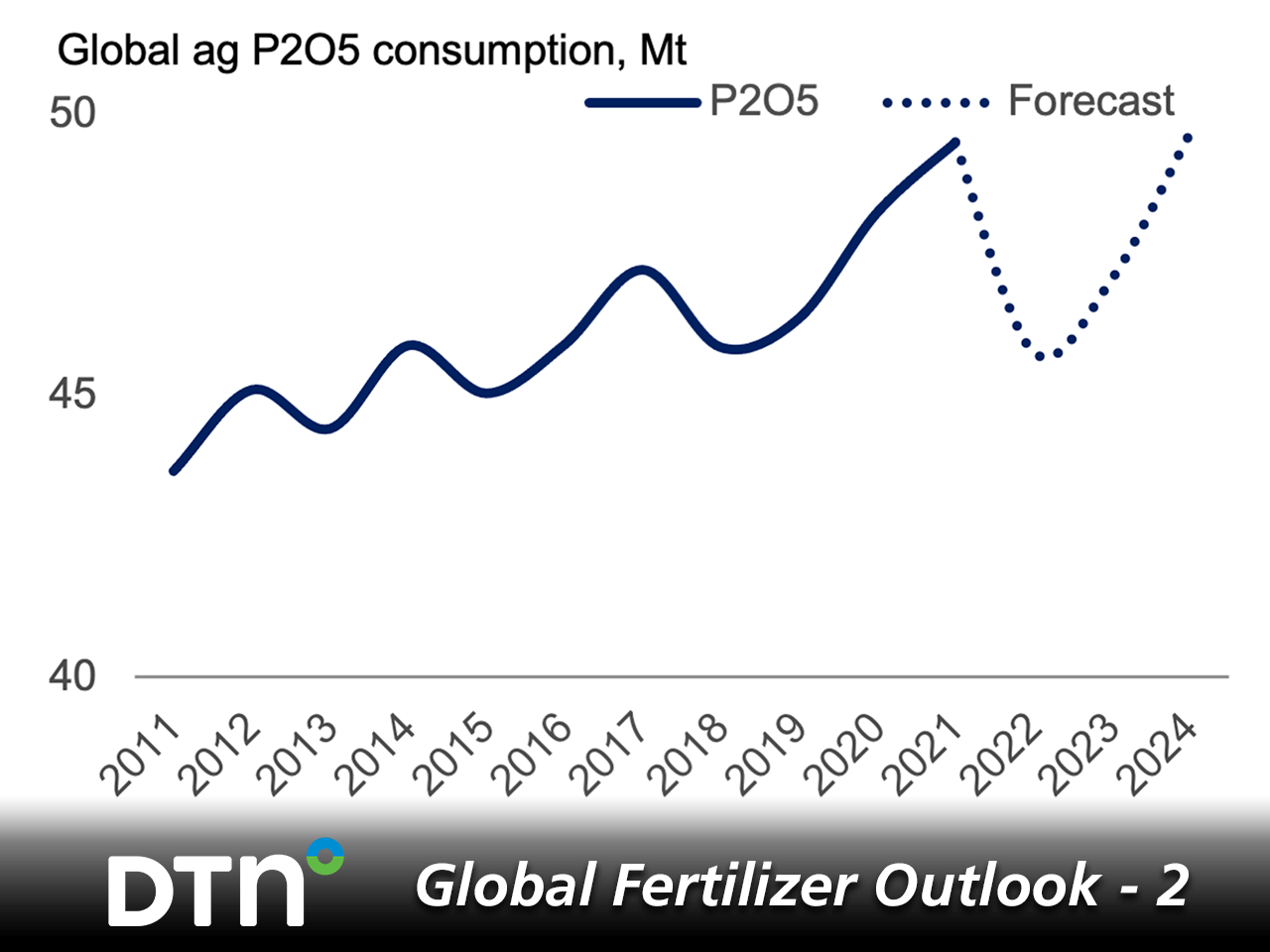