November was a month characterized overall by uncertainty across fertilizer markets in the U.S. The big question at this time of year usually relates to how much or how little post-harvest fertilizer applications will occur, hinging on late-fall/early winter weather conditions and determining how successful an end of the year will be for phosphate and potash suppliers. In addition to those seasonal concerns, we also saw record-low water levels on the Mississippi River continue to affect barge trade, as well as looking abroad for support to local fertilizer markets in lieu of much demand from U.S. customers -- particularly in nitrogen markets, including urea, UAN and ammonia.

The following is a recap of fertilizer price trends and market developments for November:


Domestic: November was a record-setting period for ammonia truck loadings at certain Midwest terminals, a distributor told Fertecon. Most volumes were prepaid for fourth-quarter 2022 shipment, however, so despite the heavy movement, there were relatively few spot sales.

In further contrast, rains and snow through the month limited direct application activity in some areas. But overall, the season was viewed as an average to slightly above-average fall in the ammonia market.

These conditions are thought to have contributed to flat pricing on ammonia, with the previous month's range of prices carried over from October to November at $1,300 to $1,400 per short ton (t) free-on-board (FOB -- or cost of sales per ton not including transportation cost) in the U.S. Corn Belt.

Plant prices from Oklahoma area ammonia facilities were heard similarly flat month-on-month but did see some facilities reduce prices by $25/t in November, with offers ranging from $1,125-$1,150/t.

After a month of uncertainty, the U.S. Senate on Dec. 1 voted 80-to-15 to prevent a looming railroad strike by imposing a labor agreement negotiated in September on the four unions whose members had rejected it. The legislation averted a rail freeze on hazardous materials, which would have included ammonia.

With tanks ending the season empty and the winter weather not precluding but certainly discouraging another heavy application period, we see ammonia prices trending stable to end the year ahead of an expected winter fill sale period before the holidays.

International: Yara and Mosaic agreed a price of $1,030 per metric ton (mt) cost and freight (CFR -- or sales cost per ton with shipping fees included) at Tampa for December ammonia shipments, down $120 on the $1,150 CFR Tampa the parties settled at for November shipments. The decrease was in line with market expectations following some relief in the global market owed to reduced European natural gas pricing, which allowed some nitrogen production in the region having restarted.

In Europe, the cost of natural gas increased further in the past month, with the Dutch TTF month-ahead price settling Nov. 30 at 146 euros/MWh, or around $45/mmBtu -- a price suggesting a cost of gas per ton of ammonia of above $1,500. Cold weather in November increased strain on gas supplies, which had previously shown a falling trend and brought the November price indications higher than the around $1,100/mt production cost in October.

Among this mixed supply side news between Europe and Asia, Fertecon's view on global ammonia prices is soft to stable, with rising gas costs offering potential support moving forward.


Domestic: Market activity was paused on urea at the end of November, with traders awaiting results in the latest India tender and users further down the supply chain not needing to buy much urea until closer to the next planting period in the spring.

Urea barge prices at the trading hub in New Orleans, Louisiana, (NOLA) closed the previous month at $451-$485/t FOB, down from the $540-$585 range in October. Like in UAN markets, slow demand for urea over the previous weeks and months has pressured trading values lower with only international markets, namely India and Europe, to provide support to barge prices.

Terminal offers on urea have dropped alongside barges, although not always proportionally to NOLA. October prices ranged from $615-$630/t FOB and dropped over the course of November to $575-$600 at locations still open to river barging, including Cincinnati, St. Louis and Inola, Oklahoma. North of St. Louis, markets close to the river had held a $10-$15 premium over more southerly markets from $600-$630 up to the Twin Cities.

November rainfall did serve to relieve some of the low-water woes on the Lower Mississippi River seen in October, but transit remains affected, especially farther north. Urea demand, however, is picking up for prepay and spring product, and prices seem supported heading into the end of 2023.

In the short term, U.S. urea prices are stable to firmer with more attention turned toward urea's relative affordability as a source of nitrogen, and toward spring nitrogen requirements in general.

International: Weak demand persisted at the end of November in global urea markets, putting pressure on prices as sellers await the next Indian tender -- seemingly the only key market actively seeking product at present.

Egyptian urea prices in November ended the month at $550-$560/mt FOB alongside the weaker demand, which allowed buyers to bring down bid levels, falling around $100 from October price levels at $650.

Urea prices in the Brazil market did not see any more support in comparison with buying activity at a standstill, although reports of buying interest returning in the next couple of weeks were heard in the market. Our assessment declined to $520-$550/mt CFR versus the $610-$630 range reported at the end of October.

In general, the market is long with ample availability across different regions. Weak demand persists outside of India, which should come back in late December and possibly buy another 1 million tons at most likely a discounted price to its most recent tender.


UAN pricing came under some intense pressure in November alongside falling urea prices as well as stable ammonia pricing. Buyers were left with the impression that offers needed to come lower to closer parity with urea, and both barges and terminal pricing saw noticeable decreases as a result.

NOLA barges, for example, declined to $525-$530/t FOB for 32% N product, moving $20-$25 down from our October spot barge assessment. Liquidity was slim in October, but some movement increased in November once offers began to come down in line with bidders' price ideas.

River terminal pricing on UAN also declined by the end of November to $575-$580/t FOB at Cincinnati, down from sales at $600 in the month previous. Being one of the most important markets for UAN, lower values in Ohio in part motivated the decrease in barge offers at NOLA.

Following the falling values in other markets, eastern Oklahoma-area production facilities also lowered offers to $530-$540/t versus October pricing at $545.

Despite how slow the domestic market has been, the U.S. continued a strong pace of exports heading into the fourth quarter, with the activity attributed to earlier sales into Europe during the peak of nitrogen production curtailments in the region.

Production there is beginning to recover, however, and with less export demand, we are seeing further pressure on U.S. pricing due to the slowing pull of volumes overseas. UAN pricing is seen as softer in the short term, although if urea barge values continue to rally, there could be some support for stabilizing prices closer to current offers.


Domestic: November was a month characterized by weakness in phosphate markets due to continued struggling demand in the post-harvest period. DAP and MAP can be applied as soon as crops are out of the field come fall, but buyer enthusiasm has not emerged in force. Carryover volumes from earlier in the year as well as unattractive prices seem to be the primary factors.

Regarding the trading market, NOLA DAP ended November at $635-$640/t FOB, down nearly $100 from our assessment of $710 in October. The premium of MAP over DAP continues to be reversed due to shorter supplies of the latter, with November MAP priced at $620-$640 FOB versus the prior-month range of $695-$700.

Terminal phosphate offers were also lower in turn at $790-$800 FOB DAP and $790-$825 MAP -- $5-$10 and $20-$30/t lower, respectively. Persistent issues along the Mississippi River also contributed to the lack of barge demand and pressure on prices, but conversely provided some more support to warehouse and terminal prices, which were more readily available.

A post-Thanksgiving boost in demand did not end up emerging for preplant fertilizers as some in the market had hoped, and buyers are expected to remain disengaged through the end of the month. Barring any aggressive fill programs bringing some last-minute activity, we see U.S. phosphate prices as lower to stable in the short term.

International: Some signs of price stability and even a little strength began to creep into DAP and MAP markets west of the Suez Canal in November. Prices still fell generally lower in November, but the overwhelmingly softer mood present in previous months has begun to subside somewhat.

Fertilizer market activity in Brazil outlined firmer demand fundamentals, the result of improved farm economics seen in November and forward sales advancing in regions that would usually be rotating crops. Brazil MAP prices were assessed from $600-$605/mt CFR at the end of last month, having fallen $35-$45/mt compared to the $635-$650 CFR range in October.

India, meanwhile, saw more modest declines to $730-$732/mt FOB DAP in November, compared to sales achieved at $745 in the month prior. The Southeast Asian market -- India included -- have been stagnating lately, with prices having dropped across the entire region last month.

While our outlook during the past few weeks has been one of a global market under pressure, phosphates prices appear to be stabilizing in the short term.


Alongside phosphates, November proved to be something of a lackluster month for potash demand, and prices declined in turn.

Granular potash barges declined to $505-$515 last month, down from October price levels at $565. As we reported previously, the entire calendar year of 2022 has been a difficult one for potash, having kicked off the year with a poor spring application period due to delays on the arrival of fair weather, which strongly curtailed the pre-planting window.

In addition, North American potash producers had in late 2021 and early 2022 resolved to increase mining rates to make up for anticipated shortfalls of Russian and Belarusian potash. When the market proved to have absorbed less imports from those sources with few issues, the boost in supplies weighed on prices and are still filling space in storage bins.

Early December also came with Mosaic's announcement that it would temporarily curtail production at its Colonsay potash mine in Saskatchewan, Canada, further illustrating the glut of supply observed in North America. We see potash prices as lower to potentially more stable in the short term, ahead of a possible winter-fill program, as the market winds down ahead of the holidays. 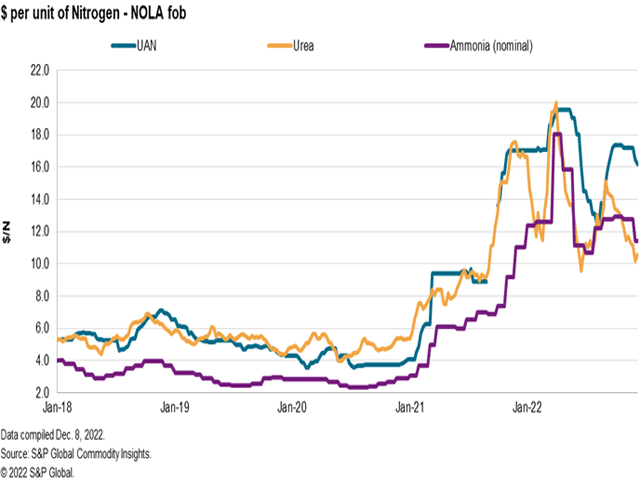