James and Deaver Traywick are head high -- and then some -- in a late-spring field of broom-bristle-thick cover crops on their farm, near Cope, South Carolina. They are just days from planting the acres to cotton and will have to flatten a mix of rye, crimson clover and tillage radish to do so. In the process, they'll have to penetrate that thick fibrous mat to place the seed less than one inch deep.

The father and son will get more back this year than just improved soil health and weed suppression for their efforts; they'll receive additional income for planting multiple cover crops.

The Traywicks are part of a growing number of farmers participating in the still-evolving carbon-sequestration market. In essence, corporations are willing to pay farmers to implement practices like cover crops and no-till while fine-tuning nutrient management.

DTN/Progressive Farmer has been running a special series of articles called Farm Climate Smart that examined what the term means, looked at current and future economic opportunities the movement offers for farmers and ranchers, and highlighted what some producers are doing now to make their land and crops more resilient to a changing climate. In today's article, the seventh and final story in the series, DTN looks at how, with the carbon-sequestration market, corporations are willing to pay farmers to implement practices, like cover crops and no-till, while fine-tuning nutrient management.

Conservation tillage and cover crops are very familiar to the Traywicks; they've been using both for 40 years. What's different this year and last is that they've added crimson clover and tillage radish to the oft-used rye. Those additions on 800 acres of their 1,300-acre farm are why agriculture technology company Indigo Ag -- which has set up a program designed to help farmers tap into the emerging carbon market -- is facilitating their payments based on the carbon credits they generate.

Simply cutting future emissions of carbon dioxide into the atmosphere isn't enough to hold off potentially catastrophic effects of global warming, according to the National Academies of Sciences, Engineering and Medicine. So-called "negative emissions technologies," such as carbon sequestration, are needed to remove carbon already in the atmosphere to keep warming below the critical 2 degrees Celsius (35.6 degrees Fahrenheit), according to a 2018 academies report.

Agriculture, directly and indirectly, produces about one-third of all greenhouse gas emissions in the world, points out Rattan Lal, distinguished professor of soil science and founding director of the CFAES Rattan Lal Carbon Management and Sequestration Center, at Ohio State University. But Lal also says farming and forestry can sequester the equivalent of one-fourth of all global current carbon dioxide emissions using soil-conservation measures.

While the Traywicks' system may work -- profit-wise as well as enhancing conservation -- at the farm level, there are a lot of changes that need to happen to move the needle on a global scale and climate change.

As of 2019, he says human-related activities annually emitted about 10 gigatons of carbon into the atmosphere. Another 1.5 gigatons are emitted due to world deforestation.

To get a sense of the size of these numbers, 1 gigaton (1 billion tons) is equivalent to the mass of all land mammals on earth (excluding humans). Carbon sequestration in agriculture and forestry could offset one-fourth of that 11.5 gigaton total, or about 2.8 gigatons of carbon.

If fossil fuels are completely replaced by other energy sources, and enough carbon sequestration takes place, the average global temperature can be kept within 2 degrees C (35.6 degrees F) of what it was at the dawn of the Industrial Revolution. "Agriculture is the solution as long as fossil fuel is replaced," Lal adds.

This is the seventh and final story in DTN/Progressive Farmer's Farm Climate Smart series. 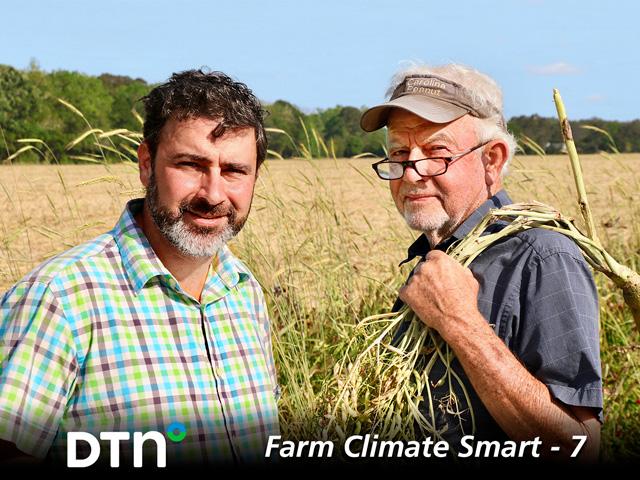