A hard-driving, 4.5-inch rain this spring pounded Dick Sloan's recently planted farm in east-central Iowa. If his gently rolling fields were tilled -- a smooth surface of pulverized soil void of surface residue -- precious topsoil and hopes for a bountiful harvest would have washed away.

Instead, the farmer, near Rowley, was confident all was well. In addition to no-till, he plants cover crops on his entire farm, which also has grass waterways and prairie strips in areas where needed to stop erosion and boost water infiltration.

"That's the most satisfying experience, to be able to go out there and know that I'm not losing soil under extreme (weather) conditions," he added.

Starting today, DTN/Progressive Farmer will feature a series of articles called Farm Climate Smart that examine what the term means, looks at current and future economic opportunities the movement offers for farmers and ranchers, and highlights what some producers are doing now to make their land and crops more resilient to a changing climate. Today's story looks at what measures one farmer uses to help protect crops from extreme weather.

Climate extremes such as the downpour on Sloan's farm pose a threat to crop production and food security, according to a study co-authored by Amin Nouri, a former University of Tennessee postdoctoral research associate and current senior agricultural research scientist at Monty's Plant Food Co.

According to the study, the planet will continue to get warmer, and precipitation contrasts between wet and dry regions will increase. The adverse impact on crop production from weather variability will be more pronounced in the future.

That's one reason Sloan is taking steps now. He believes his farmland, which wasn't negatively affected by two large rain events that included the spring deluge and a 3.5-inch downpour, is prepared to handle almost anything Mother Nature throws at it.

"You always have to be prepared for those (rain events or droughts), because you never know when they're going to occur," Sloan explained.

Here are examples and benefits of production practices farmers can implement to be more climate smart.

Prairie strips involve taking small portions of cropland out of production to plant strips of perennial native prairie. The Science-based Trials of Rowcrops Integrated with Prairie Strips (STRIPS) program at Iowa State University (ISU) is researching and promoting the practice.

A variety of prairie species -- big bluestem, purple coneflower and Indiangrass, to name a few -- are planted in strips ranging from 30 to 120 feet wide through a field, along waterways or in a terrace channel. The strips typically cost $28 to $39 per acre to install, ISU data indicates.

The native plants, with deep, strong roots and stiff stems, help keep soil and nutrients in place. Thirteen years of STRIPS trials have demonstrated that converting 10% of a crop field to prairie strips could result in the reduction of 95% of sediment, 90% of the phosphorus and 84% of the nitrogen from overland flow of surface water. All the experimental sites were no-till systems and not tile drained.

Youngquist said he's worked with dozens of farmers and landowners in Iowa to implement the practice. STRIPS projects are in the works in Minnesota, Nebraska, Wisconsin and several other states.

"The corn and soybean system we have in the Midwest is incredibly productive thanks to some of the best soil on the planet," he said. "Prairie strips are another conservation tool ... to help keep that valuable topsoil in place."

Cost and loss of income potential is often a stumbling block to implementation, Youngquist continued. Funding is available to plant prairie strips, and land can be enrolled in the Conservation Reserve Program (CRP) to receive a payment of up to $300 per acre annually.

Sloan recently reenrolled 4.5 acres of prairie strips, which he's had for a decade, in CRP for the annual maximum payment. "I'm renting the land out to the environment," he quipped. (Learn more about the STRIPS program at https://www.prairiestrips.org/….)

Relay cropping is a version of double-cropping, but the second crop (in this case, soybeans) is planted into the first crop (winter wheat) before it's harvested, not after. Both crops share a portion of the growing season, increasing solar radiation and heat available to each.

In relay cropping, winter wheat acts as a cash cover crop, protecting the soil in the late fall and winter, and providing beneficial residue to improve soil health and preserve moisture for the second crop.

"There's something always growing to protect the land that farmers can harvest," Lofton said. "You can have two potentially high-yielding, high-money-making crops."

In 2021, OSU research results showed winter wheat yields averaged about 50 to 60 bushels per acre (bpa), which is 10 to 15% less than nonrelay-cropped winter wheat because of damage from soybean planting. Relay-cropped soybean yields were unaffected by the winter wheat harvest, Lofton explained, averaging 50 to 60 bpa.

Lofton plans to include milo and cotton in the multiyear relay-cropping study. (Learn more about relay cropping at https://cropwatch.unl.edu/…)

Research from Nouri and his team reinforces the long-known benefits of no-till and cover crops. Their study examined 29 years of climate data, cotton yields and soil data under 32 management practices in Tennessee. The practices include a combination of cover crops, tillage (no-till and conventional tillage) and various nitrogen application rates.

Even though the study focuses on cotton-yield stability in the Southeast, Nouri pointed out the goal to help farmers adapt to extreme hot, wet or dry conditions is the same for all regions and crops.

Nouri said after at least five years of no-till and cover crops, the benefits over conventional-tilled fields include:

"I want to emphasize that long-term no-till is key for long-term soil-system resilience and yield stability under all climate extremes," he added.

Drought generally isn't a concern for Jason Luckey, whose west-central Tennessee farm usually receives more than 50 inches of precipitation a year. Heat, though, can be worrisome. This year, both were a problem.

Luckey grows cotton, corn, winter wheat and soybeans. He said it's years like this that no-till pays off, especially for cotton. The soil, with ample surface residue, is better insulated from multiple days of 100-plus degrees Fahrenheit heat and retains available moisture better to mitigate crop stress during flowering and boll development.

"The cotton withstood the heat and dry conditions better," the Humboldt farmer said. He notes 900- to 1,500-pound-per-acre cotton is doable this year (depending on field production potential), much like in 2012 under similar climatic circumstances. If it wasn't for no-till, Luckey said yield potential wouldn't be nearly as promising.

When his family started to transition to no-till in the 1990s, he could see disked cotton fields showed signs of heat and moisture stress several days before no-tilled fields. "That made us believers in the no-till system," he emphasized.

This is the first story in DTN/Progressive Farmer's Farm Climate Smart series. 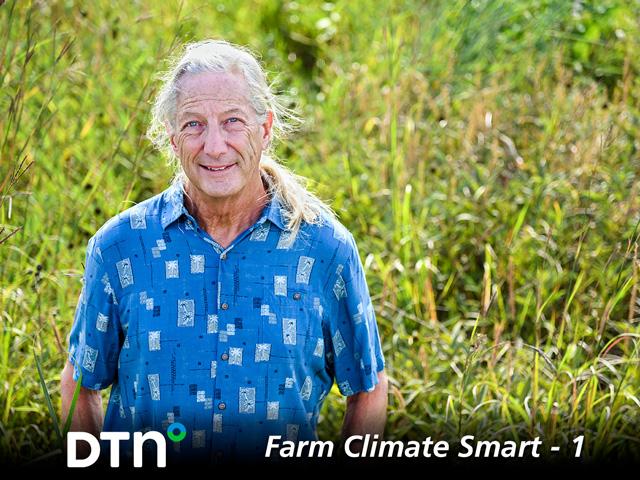