LINCOLN, Neb. (DTN) -- Tar spot was identified in a central Iowa corn field this week, and according to an Iowa State University plant pathologist it's time for farmers to start scouting fields.

Alison Robertson, professor of plant pathology and microbiology at ISU, wrote in a blog post on June 29, that an agronomist found the corn foliar disease in Marshall County in a field in the V11 growth stage. That part of Iowa recently received rainfall.

Tar spot typically shows up in corn crops during the critical reproductive and grain-fill stages in mid-July to early August, or later.

"It is pretty early for Iowa," she told DTN.

"Normally in eastern Iowa there's a scout out there who picks it up the beginning of July. I would say like maybe a week, 10 days earlier than normal," she added.

Robertson said its arrival is particularly concerning because of late planting in the region.

"Right now, they (farmers) should be scouting," she said.

"We had some pretty good rains across Iowa in June. And so, my colleagues out in Wisconsin, Indiana, Michigan, who have dealt with this a lot more and they say that after a good rain, that they'll kind of see it."

Robertson said scouts often mistake bug excrement for tar spot but there is a way to understand the difference.

Tar spot will appear on both sides of the leaves, in the same spot on both sides and will be irregular in shape. Bug excrement tends to be shiny in appearance and more rounded, Robertson said, and takes quite an effort to scrape away.

Tar spot was first discovered in the U.S. in 2015. It is a fungus that produces small (1/16-3/4 inch), round to irregular round and/or diamond-shaped, raised black structures called stromata. These structures form on both the upper and lower surfaces of corn leaves.

The pathogen reduces yields by limiting photosynthetic capacity of corn leaves and causes rapid, premature leaf deterioration and death. Inoculum overwinters in corn residue and can survive extreme heat and cold. Rain and high humidity cause the stromata to release spores, which are dispersed by wind and rain.

"And the other thing to remember is that if you do choose to put a fungicide on it, you're going have to come back in three or four weeks and put another fungicide on. That's why scouting is a good idea to get out there and see how prevalent it is. Is it on every single plant or is it on just one plant? So, if you're just finding one spot that's not a big deal. You know it's there. And now you just need to keep an eye on it, monitor it and hold off on that fungicide as long as possible."

When it comes to central Iowa, Robertson said decent rains up to 3 inches in June in some areas led to tar spot.

"Whenever we have heavy precipitation events where those leaves remain wet for several hours, at least six hours, probably longer than that, then we may see tar spot under those conditions," she said. 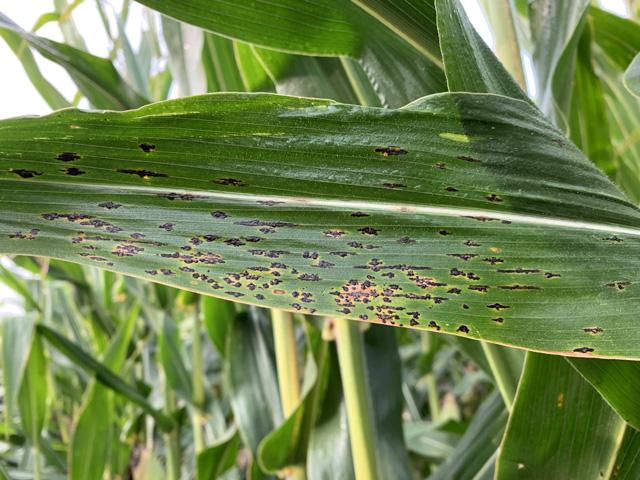