ANKENY, Iowa (DTN) -- Corn foliar diseases such as southern corn rust and tar spot may be more problematic this year. Agronomy and plant disease specialists urge farmers to stay vigilant, scouting for the potential yield-robbing pathogens, and be ready to protect crops.

Alison Robertson, Iowa State University Extension plant pathologist, said later-planted corn in the Midwest could increase potential damage from both fungal diseases. But weather will ultimately be the driver.

Much of the corn crop will be in the critical reproductive and grain-fill stages in mid-July to early August, or later, when the foliar diseases (if inoculum is present) typically start to develop, according to Robertson.

"That can have more of an impact on yield," she said. "The severity and if the diseases affect crops will be determined by the weather."

Tar spot yield losses can be minimal to none or 50 bushels or more per acre, according to the Crop Protection Network (CPN). Similar yield losses are associated with southern corn rust, agronomy specialists said.

"If you walk into a cornfield at 8 a.m. and you're not getting wet, then you don't really have to worry about tar spot or southern rust," Robertson said. "But if you're walking out into that field at 9 a.m. and you're getting soaked, that's a concern."

To keep up to date on where tar spot and southern corn rust is located, go to https://corn.ipmpipe.org/….

A strong ridge of high pressure in the upper levels of the troposphere is expected in the Rockies and the middle of the country in July and August, according to DTN Ag Meteorologist John Baranick. The most likely outcomes from this pattern will be a hot and dry weather pattern, he said.

"That could also lead to a couple of other factors that would have an influence on early morning weather," Baranick added. "That ridge could cause lower wind speeds, clearer skies, and also increased dew points. A reduced wind and clear skies allow for more energy to radiate out into space in the morning, leading to lower morning temperatures.

"Higher dew points result in higher relative humidity in the morning hours," he continued. "That would likely increase disease pressure for crops during that important timeframe."

Thirteen positive or probable cases of southern corn rust -- a fungal disease that resembles orange rust on leaves, robbing nutrients and deterring plant growth -- were identified in Florida, Georgia and Louisiana as of June 16, according to the Integrated Pest Management corn pipe website (https://corn.ipmpipe.org/…). Robertson said the disease appeared about two weeks earlier than normal. Recent hot and wet weather in the southeast is likely the reason, she said.

Symptoms for southern corn rust are similar to common rust, but pustules are smaller and occur almost exclusively on the upper leaf surface, according to CPN. Pustules are usually circular or oval, very numerous, and densely scattered over the leaf surface. Spores are orange when they erupt from the pustule. As pustules age, they become chocolate brown to black, often forming dark circles around the original pustule.

Southern corn rust has long been an issue for Southern farmers. Robertson said it's inevitable that southern corn rust spores will travel via storms and air currents to the Midwest. Most years, it arrives too late to cause much damage, she said, but that may not be the case this year.

"Because our crops are behind, it's more of a concern," Robertson concluded. "Every year we see it, but most times it never really takes off because by the time it arrives, temperatures are cooling down."

Wyffels Hybrids Agronomy Manager Ryan Gentle agrees southern corn rust may be a problem this year in the Corn Belt due to late planting.

"We might still have a lot of grain fill happening in September," he said. "We want to make sure to protect that green canopy. We'll want to scout a little later in the season. We also recommend spraying fungicides with multiple modes of action at VT to R1."

He said most fungicides that work on southern corn rust will also protect against tar spot. More than one application may be needed.

To learn more about southern rust at https://cropprotectionnetwork.org/….

Tar spot was first discovered in the U.S. in 2015. It is a fungus that produces small (1/16-3/4 inch), round to irregular round and/or diamond-shaped, raised black structures called stromata. These structures form on both the upper and lower surfaces of corn leaves.

The pathogen reduces yields by limiting photosynthetic capacity of leaves and causes rapid, premature leaf deterioration and death. Inoculum overwinters in corn residue and can survive extreme heat and cold. Rain and high humidity cause the stromata to release spores, which are dispersed by wind and rain.

Robertson said tar spot is spreading more and more across the Corn Belt. She recommends farmers scout corn fields from the end of the vegetative stage through grain fill and apply fungicides when needed.

"Farmers would likely spray at about VT to R1," she continued. "Since many planted later, when (and if) the disease shows up, fungicides might actually go on at almost the perfect time as diseases start to keep it from ramping up."

The residual efficacy of fungicides are usually three to five weeks, depending on the product, Robertson said. Like southern corn rust, Gentle suggests farmers scout well into the corn reproductive period because more than one application may be needed. 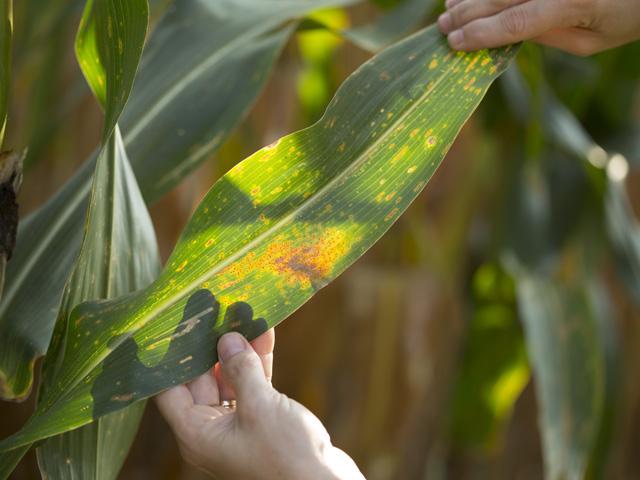