OMAHA (DTN) -- Osceola County, Michigan, is home to nearly 25,000 people. Located in the west-central part of the state's lower peninsula, the county is home to many farms that raise different crops such as corn, soybeans, wheat and forages.

The county is also sitting on a large underground supply of potassium and could someday be home to a potash mine that could produce thousands of tons of potash fertilizer. Michigan Potash & Salt Company is hoping to build such a facility near Evart and have it producing fertilizer by 2025.

Potassium, also known as potash, is found naturally in the soil, according to The Fertilizer Institute (TFI). Nearly 98% of it is unavailable to plants in its existing form, thus making potash fertilizer essential for crop production.

Potash (K) is essential for carbohydrate and starch synthesis in plants and also helps plants resist wilting. It is mined from the soil, and Canada is the world's largest producer and exporter, with 1.1 billion metric tons of potash reserves (https://www.nrcan.gc.ca/…).

World potash consumption in 2021 for fertilizers was estimated to have increased to 45 mmt from 44 mmt in 2020 (https://pubs.usgs.gov/…). Asia and South America are the leading potash-consuming regions of the world.

U.S. production in 2021 was estimated to be 480 metric tons (mt). Roughly 85% of U.S. potash sales is used for fertilizer, while the remainder is used for chemical and industrial applications.

The U.S. imports about 96% of potash necessary for fertilizer production. With unstable geopolitical issues unfolding in Ukraine, enter the Michigan Potash & Salt Company venture to build a potash mine in Michigan.

Aric Glasser, chief operating officer for Michigan Potash & Salt Company, told DTN the company has spent 10 years planning the project, known as the U.S. Potash Project. The company has secured 25-year leases from landowners in Osceola County to build a mine.

The mine will be built near Evart. The region is home to one of the highest-quality natural potash and salt deposits in the entire world, he said.

"With fertilizer demand on the increase and food security important, we want to produce U.S. potash. which will put Michigan on the map and create a lot of jobs," Glasser said.

The mine would produce both potash fertilizer and food-grade salt. It won't be a conventional mine where the earth is opened and people work underground. Instead, Glasser said, the mine would utilize modern technology to pull the product out of the soil without sending workers underground. Using a technique called "solution mining," water will be injected deep into the ground where it mixes with the potash. That produces a brine mixture, which is then boiled off, resulting in potassium chloride (fertilizer) and sodium chloride (table salt).

"It is not your conventional mine," Glasser said.

The project will create more than 300 union construction jobs over three years and 180 full-time jobs, he said. The mine would have a lifespan of 150 years.

Building a potash mine is not an inexpensive undertaking. Glasser said the total cost to build the mine will be about $1 billion.

Most of the financing for the mine is in place, so much of the construction of the mine is set to begin toward the end of 2022. While anything can happen in this uncertain business climate, Glasser said he feels confident the business will be able to begin construction this year.

The issue with financing is a major obstacle for the company to overcome, according to Humphrey Knight, London-based CRU senior analyst for potash fertilizers.

While difficult to assess considering the company is privately held, the project has progressed significantly over the past year, he said. However, Knight said there are still some lingering questions with the financing aspect of the project.

Construction will happen in a 36-month window, and the company hopes to be producing potash by 2025, Glasser said.

"We will produce 650,000 tons a year at the beginning of the operation and could increase production to 900,000 tons in a few years," Glasser said.

The challenges of building a potash mine are many, according to Glasser.

The company's design and execution teams utilized people who had worked in Canadian facilities in the past. Nearly 300 years of industry expertise in the field of potash production and distribution are employed at the company, he said.

In April, the company announced they had signed an offtake agreement with a major U.S.-based agricultural company to take and distribute 100% of the first phase of potash fertilizer production (https://www.prnewswire.com/…). Glasser declined to name the company.

The two companies under the agreement would work together to ensure optimal pricing and timely delivery of the crop nutrient.

"By partnering with an agricultural leader, Michigan Potash will help to satisfy farmer requirements for potash as world supplies are unaffordable or utterly unavailable," founder and CEO of Michigan Potash Ted Pagano said in the news release.

"Together, we will create a new, complementary production, logistical and sale powerhouse by supplying Michigan white potash to the American farmer."

"We hope to have a one-to-one replacement for those Russian imports of potash which have been lost," he said.

CRU's Knight told DTN this project is the first new potash facility to open in the U.S. in many years. Mosaic operated a mine near Hersey, Michigan, (which is also in Osceola County) until ceasing operations in 2013.

This facility's annual production would be significantly greater than levels ever achieved at Hersey, he said.

Knight said it's important to note the U.S. is the third-largest potash consumer in the world, with demand of about 10 mmt. Canada supplies the vast majority of this annual requirement with additional supply arriving in the port of New Orleans from overseas producers, which include Russia, Belarus, Israel and Germany.

"Given the initial phase of the Evart project is reasonably small in scale, its impacts on U.S. supply and demand dynamics are likely to be modest, should it enter production," Knight said.

Glasser said the support of the project has been excellent in Osceola County, especially from the county's rural residents. There has been almost no negative feedback from their project, he said.

The company is leasing land from farmers in the county, and they support the company producing American fertilizer, he said. Four-hundred-fifty rural families directly benefit from royalty payments, averaging three times the average income in Osceola County.

Everyone wanted to play a small role in our country's food security, Glasser said. 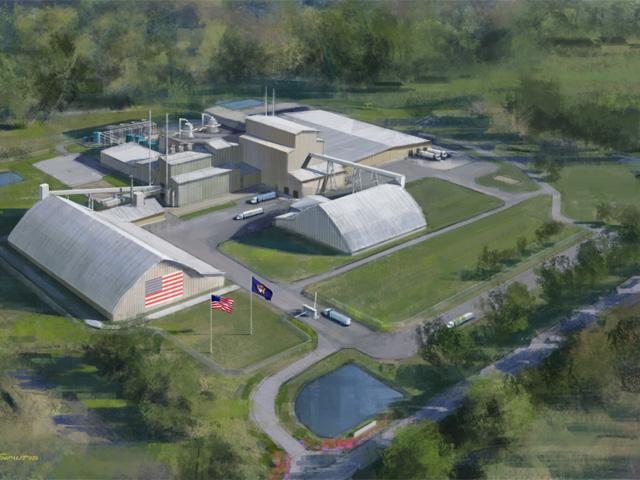