Kansas HWW fields will be primarily evaluated, along with a few in southern Nebraska and northern Oklahoma, during the four-day event that starts in Manhattan, Kansas. Field sampling starts on Tuesday, May 17, and ends Thursday, May 19, when final yield and production estimates will be released.

With harvest only weeks away, USDA released its HWW production estimates on May 12. The government projects production will be 21% less than last year at 590 million bushels due to widespread drought in the Great Plains. USDA forecasts total winter wheat production at 1.17 billion bushels, down 8% from 2021.

USDA's HWW assessment was done at the beginning of May. Many parts of Kansas, the nation's largest wheat producer at 364 million bushels last year per USDA data, received significant rainfall since May 1, which helped the crop. But that was followed by intense heat, as temperatures soared above 90 degrees Fahrenheit, which can limit production as plants race to the finish line.

"Things have certainly changed since the USDA assessment," said Dave Green, tour organizer and executive vice president of the Wheat Quality Council based in Lenexa, Kansas. "Our tour is more real-time and provides more fresh information closer to harvest. There's no question that we're going to be more zeroed in on the final crop production numbers."

For most of the tour's 40-plus-year history, Green couldn't make that claim. The tour used to be held during the first week of May, which is before USDA releases its HWW production estimates. Green said government and tour yield estimates were done when many wheat fields weren't even headed out yet.

Last year was the first time the tour was held during the third week in May to allow more participants to get COVID-19 vaccinations. Green said there's no going back to the earlier time frame.

"There was almost a unanimous consensus feeling (among last year's attendees) that this time was much better," Green said, referring to the third week of May. "It's closer to the peak of heading and a better time to look at wheat and talk about yield."

DTN Lead Analyst Todd Hultman said the tour is coming at a perfect time when concerns are running high about how much wheat is available and will be available in the world. "The USDA's production estimate is adding to those concerns," he continued.

"Given the bullish scenario, it is not a shock July Kansas City wheat ($12.70 per bushel) and September Minneapolis wheat ($13.11 3/4 per bushel) both posted their highest closes since 2008 on Thursday, May 12," Hultman said.

More than 80 representatives of seed companies, millers, food manufacturers, agronomists, university crop researchers and more have signed up for the tour. The event brings wheat industry officials and buyers and sellers together to network, learn about how the crop is produced and how much will be available for future food and feed needs.

Romulo Lollato, Kansas State University Extension wheat specialist, said the HWW crop in the tour area started off well with good moisture and growth last fall after planting. "There was a large amount of biomass heading into winter," he said.

The winter was cold and dry, and the spring was dry as well, which delayed plant development, Lollato said. Several inches of rain in early May in some areas of Kansas did help crops, but that has been countered by a recent detrimental heatwave.

"It can really accelerate crop development and hurt grain yields," Lollato said. "I think people on this tour will see a crop that has been drought-stressed, especially in western Kansas. That's not going to be a beautiful picture. I expect yields overall will be considerably lower than in past years."

However, there will be plenty of fields in eastern and central Kansas and Nebraska that look good. Read a recent DTN story about the U.S. winter wheat crop at https://www.dtnpf.com/….

The Oklahoma Grain and Feed Association released its estimate of the state's hard red winter wheat crop on May 3. Read the DTN story at https://www.dtnpf.com/….

The association's assessment pegged production at 57 million bushels and the average yield at 23.5 bpa.

The following is the latest USDA winter wheat data for tour states:

-- Kansas farmers planted 7.4 million acres of winter wheat, with 6.95 million projected to be harvested. The average yield is estimated at 39 bpa, down from 52 bpa last year. Production is projected at 271 million bushels, down from 364 million in 2021.

-- Oklahoma farmers planted 4.4 million acres of winter wheat, with 2.4 million projected to be harvested. The average yield is estimated at 25 bpa, down from 39 bpa in 2021. Production is pegged at 60 million bushels, down from 115 million last year.

Hundreds of fields will be assessed by tour scouts using the same procedures for consistency. The same six tour routes are followed every year.

Tour participants are assigned different routes and make random stops in fields about every 10 to 15 miles. Each vehicle makes 12 to 15 stops each day. At the end of each day, yield estimates are tallied.

On Monday, May 16, participants gather in Manhattan, Kansas, and are trained to measure wheat yield potential and scout for disease, such as wheat streak mosaic. Lollato said that is the only disease issue at this time that farmers are concerned about.

On Tuesday, May 17, the tour-goers travel through northwest and north-central Kansas, with one route hitting Nebraska's southern counties. The day ends in Colby, Kansas. On Wednesday, May 18, scouts check out fields in southwest and south-central Kansas, with one route traveling through northern Oklahoma. The day ends in Wichita, Kansas.

The tour ends on Thursday, May 19, after scouting fields in southeast Kansas and revealing final yield and production estimates from tour stops.

Media outlets including DTN will participate. Look for DTN tour stories, including yield estimates and observations, on www.dtnpf.com. 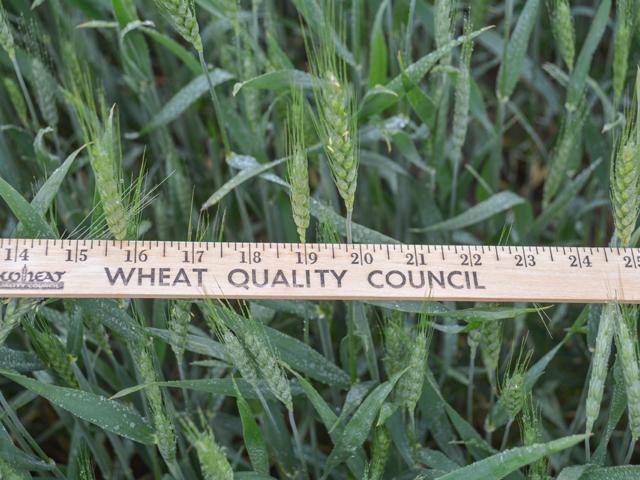