ROCKVILLE, Md. (DTN) -- Wheat is a resilient crop, but after a dry fall and winter in the Great Plains, and an equally parched spring plagued by days with 60-mph winds, even the hardiest stands are approaching their limits.

"It's definitely sucking the life right out of it," said Alex Millershaski, a southwest Kansas farmer whose winter wheat is limping along in Gray County. He had already abandoned 800 acres due to zero soil moisture at planting time; now he's hoping a half-inch rain last week will push yield into double-digit territory on his remaining acres.

"We'll be cutting 12-inch-tall wheat if it doesn't rain," he predicted.

Millershaski is far from alone. Large swaths of the major winter wheat growing regions in the U.S. are facing the likelihood of below average yields, as drought has intensified across the Plains this spring, with summer forecasts bringing little hope for reprieve.

"It feels like we've been balancing on the knife's edge for months," as Jeanne Falk Jones, an agronomist with Kansas State University, put it. Tiny spurts of rain and snow have kept the crop in her northwest Kansas region hanging on since last fall, but the lost yield potential is already permanent and deepening. "There has already been a lot of damage done to this wheat crop," she warned.

"Overall, conditions have been poor from Nebraska through western Kansas and down through West Texas," explained DTN Ag Meteorologist John Baranick. The region has seen a downward trend in moisture since late last summer, he noted, with low precipitation this fall and winter, and spring storm systems staying to the north.

Recently, persistent high winds have added insult to injury. As an active spring storm pattern swings north across the western U.S., it has sent dry, punishing winds to the Plains, Baranick explained. "Strong winds, combined with the dryness, have caused lots of blowing dust and reports of burying wheat crops along with drying out soil moisture even more," Baranick said. (For more on the "off the charts" wind velocities this spring, see this DTN article: https://www.dtnpf.com/…)

In eastern Nebraska, Kenny Reinke said the relentless winds have left his dryland wheat acres "graying out" and even his irrigated stands are thin and uneven. Reinke's DTN weather station has clocked his fields losing more than 10 inches of moisture to evapotranspiration so far this year -- double the norm. "It's not just low precipitation we're fighting," he said.

The result is a concerning reduction in wheat condition and production potential at a time of soaring wheat prices and anxious markets, noted DTN Lead Analyst Todd Hultman.

On Monday, May 2, USDA reported only 27% of the winter wheat crop was rated in good-to-excellent condition. "That's the same as last week and the lowest for this time of year since a 23% rating on April 30, 1989," Hultman noted.

Kansas's good-to-excellent rating of 25% is the lowest since the fall of 2018, he added. That's a worrisome situation for a state that accounted for 28% of total U.S. winter wheat production in 2021.

However, a rainy front that moved across the Plains this past weekend and is forecast to continue dropping some moisture early this week could provide some relief, both Hultman and Baranick noted. "Monday's ratings may be the low mark for a while," Hultman said.

"But for the rest of May and going through the summer, the forecast is continuing to favor hot and dry conditions for this part of the country," he cautioned. "Even with some short-term relief, it would not favor any widespread improvement in the drought conditions."

While the recent spots of rain have been a welcome relief to many in northwest Kansas, certain agronomic realities have to be confronted for this wheat crop, Falk Jones noted.

"We're seeing wheat a little behind normal development, but at this point, the total potential kernel number is set," she said. "Once we have that growing point move above the soil surface, that number is set. So, we can no longer increase the number of kernels -- we can only decrease it from here forward."

In addition to lower kernel set, many fields are sloughing off some spring-set tillers, which growers were depending on to recapture some lost yield potential during poor tillering in the dry fall conditions, she added. "The wheat plant is flexing the way that wheat is made to do," she explained. "The problem is it is flexing down, toward lower yield, as it just tries to hang on as long as it can."

There are brighter spots in the winter wheat growing region, where crop development has been rosier so far.

"The far eastern edge of winter wheat territory in eastern Kansas, eastern Oklahoma, and central Texas is in much better shape overall," noted Baranick. "Systems have not been missing these areas as much, and the forecast is for continued showers this spring."

But the summer months still loom as a question mark -- and Baranick isn't convinced the good fortune of these eastern margins of the Plains will continue. "These areas, too, are forecast to turn hot and dry this summer, maybe in time to put a lid on better production than you would otherwise imagine," he warned.

In some regions, wheat fields are simply beyond saving, regardless of what rains come.

"Things are really, really critical there," she noted. "We had a lot of fields that had to be abandoned because of the drought." She estimates at least 50% of Oklahoma's wheat acres are in very poor shape. USDA has estimated only 17% of the crop in the state is currently in good-to-excellent condition.

For growers with some yield potential hanging on, the question of how many inputs to add to this crop is a difficult one, especially with high price points and spotty supply for fertilizer and some pesticides.

The droughty wheat stands could benefit from increased weed control, since they are thinner and less likely to outcompete weeds, but many growers are reluctant to invest more in the crop, Falk Jones noted. Likewise, some of the nitrogen that was put on earlier this spring didn't have enough moisture to access the root zone of the plants. While more fertilizer could theoretically help, especially with recent rains, Millershaski isn't sure it would pencil out.

"We will put a second foliar pass of nutrients on a few acres to experiment," he said. "But the majority of the acres have had such a toll taken on them, that I don't see a need for more nutrients."

Some viral diseases are cropping up in Oklahoma, de Oliveira Silva said, but the drought has kept moisture-loving rust diseases at bay. And some dry weather insects, namely, brown wheat mites and winter grain mites, are present in fields. But few farmers are seeing economic levels that require treatment, which might not be warranted in the face of low yield potential, Falk Jones added.

"It's challenging to put money into controlling pests, when you know that the overall moisture is the major yield limiting factor," she said. 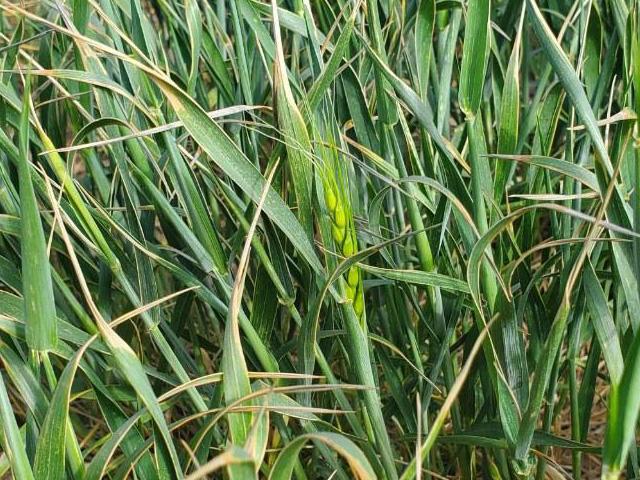