ROCKVILLE, Md. (DTN) -- Aimee Bissell already knows she's going to lose yield and profit on the soybeans she's picked for planting this year, even though no plants have emerged on her Bedford, Iowa, farm yet.

The problem? The soybean varieties she plants each year have already been outsmarted by a tiny, but devastating pest: soybean cyst nematode (SCN). Bissell has long asked her local seed dealers for access to an alternative source of genetic SCN resistance called Peking.

But a stubborn mix of breeding complexity and industry agronomic priorities have kept this option in short supply, in a limited set of maturity groups, for decades.

Bissell is hoping farmers can use their market sway to help break through the logjam.

"If I could just get more people to fight with me," she said. "If we make enough noise, maybe people will pay attention."

For decades now, the most common source of SCN resistance, a genetic trait called PI 88788, has been found in at least 95% of SCN-resistant soybean varieties. In a distant second place, Peking accounts for only 5% of varieties. As of the 2022 growing season, there is no third-place contender.

Not surprisingly, farmers across the Soybean Belt, such as Bissell, are facing down SCN populations that can successfully reproduce and steal yield on PI 88788 varieties. It is a growing and costly resistance problem for the soybean industry that somehow still flies under many farmers' radars, said Iowa State University nematologist Greg Tylka.

In the meantime, the amount of money farmers hemorrhage to this microscopic root parasite each year is staggering, he said.

Two independent, multi-university studies have concluded that SCN steals a devastating $1.5 billion from soybean farmers across the U.S. and Canada each year. On a more personal level, a recent study of Tylka's found that farmers with PI 88788-resistant SCN in their field can gain up to 22 bushels per acre by switching to Peking soybeans.

At $15 soybeans, that's a value of $330 per acre. "That's breathtaking," Tylka said. Even at more average yield responses in his past studies, which range from 5 to 15 bpa, the savings are impressive -- $75 to $225 per acre saved by switching to Peking in fields with SCN that have outsmarted PI 88788.

Seed treatment options turn over with some frequency as well. Bissell recently lost access to a product called Clariva, a nematicide that she felt worked well on her fields but was recently discontinued. Its owner, Syngenta, has turned its focus to a new fungicidal seed treatment called Saltro, which the company says also helps control SCN.

"I have been beyond frustrated," Bissell admitted. "The scientists have given us a beautiful road map on how to take care of this. I really just need to switch up my soybean genetics, but I cannot do it."

The good news is that seed companies such as Syngenta and Corteva predict they will have a broader range of Peking varieties in their portfolios in the next year or two, company representatives told DTN.

The bad news is that the same problem that has slowed the market for new SCN-resistant soybeans remains in place: SCN traits outside of PI 88788 can hold a complicated mix of genes that don't move easily from variety to variety via breeding. That's a major handicap in the fast-moving world of soybean breeding, where new traits such as herbicide tolerance drive the market and require companies to trade out their elite germplasm every few years.

Breeding a package of genes into high-yielding soybean germplasm is a slow process. It takes years of crossing and backcrossing plants, trying to bring over only the SCN genes and not any less-desirable traits -- such as lower yield -- along the way, explained Golden Harvest corn product manager Ryan Fuller and Syngenta's head of soybean breeding for North America, Jose Aponte.

In the past decade, seed companies have moved through multiple weed control platforms such as Roundup Ready 2, Xtend, Enlist E3 and Xtendflex. That's a breakneck speed for soybean breeders.

"As trait technology keeps moving and changing faster and faster, it makes it difficult to get things brought into the new varieties as you transition to new trait platforms every few years," Fuller said.

One such victim of this fast-moving trait world was a novel form of SCN resistance known as PI 89772. In 2020, Syngenta introduced a new variety to the marketplace with this resistance, sold under the Golden Harvest and NK brands. Field tests showed the variety excelled at controlling SCN, including PI-88788-resistant SCN. (See more from DTN here: https://www.dtnpf.com/….)

It had only one fatal flaw: It was in a Roundup Ready 2 Xtend variety, a herbicide-tolerant platform that is rapidly vanishing from the marketplace, in favor of XtendFlex and Enlist E3.

"Ultimately, resistant weeds are still driving the trait market in soybeans," Fuller noted. "As we transition to XtendFlex and E3 germplasm, this doesn't have a home currently."

Syngenta is still working with PI 89722 in its breeding projects, and the source may someday make it back to the market, Aponte said.

But for now, Syngenta soybean breeders are more focused on pushing Peking into more varieties instead. That's largely because the Peking trait is dependent on a smaller package of two genes, which makes moving it into new varieties a comparatively simpler process, though still less straightforward than PI 88788.

"We're trying to improve the frequency of the Peking alleles in our germplasm," Fuller explained. "We're making some progress on Enlist E3 in particular. We're not only increasing the number of varieties, but the diversity among the different maturity groups is starting to widen," he said. In the next couple years, Syngenta should start rolling out Peking varieties deeper into Maturity Group 2 all the way through to Maturity Group 0.

For now, with 25 individual varieties in the market, Corteva's Pioneer brand remains the leader for Peking availability, and the company expects to expand its maturity group offerings soon, too, Corteva soybean breeder Don Kyle told DTN.

Looking further ahead, the use of gene editing, which allows scientists to more precisely insert or remove single genes from plant DNA, could speed up the transition of SCN genes into newer varieties, both Syngenta and Corteva representatives said. Kyle said Corteva is in the "early stages" of integrating one such method, Crispr-Cas9, into its breeding program, and SCN resistance is one possible area for its use. Syngenta is also conducting promising "proof of technology" tests on gene editing, added Aponte, but commercial products are likely a decade away.

Why more farmers aren't taking Bissell's tack -- testing their fields and banging on the door of seed companies each year for more sources of SCN resistance -- remains a question that has plagued Tylka for years.

He blames the secret weapon of SCN: its invisibility. Soybeans can leach a surprising amount of yield to their root parasites, without showing obvious symptoms aboveground, he noted.

"Our problem is the plants still don't look sick, even though underground, the PI 88788 resistance is no longer working," he said. "Fields that don't have it still look very similar to a field losing 10 or 15 bushels per acre."

Researchers like Tylka have recently rebooted The SCN Coalition, an industry-university-soybean checkoff collaboration launched in the 1990s, which urged farmers to test their fields, find PI 88788 varieties and rotate to corn.

"That worked wonderfully well," Tylka recalled. "We made a lot of progress. But I think many farmers heard that message, switched to PI 88788-resistant varieties, rotated with corn, and then just forgot about SCN."

In Fruitland, Iowa, Shawna and Dave Dean have had better luck. They are working sandy, Mississippi river-bottom ground owned by Shawna's father, Ron Shepard -- the same ground where Tylka documented a 22-bushel-per-acre boost from Peking varieties in 2019.

On their most SCN-infested fields, they have been able to source and use Peking soybean varieties in maturity group 2.5. "It has been very helpful," Dave told DTN. "Especially on our lighter soil, it really does better (than PI 88788)."

But for growers who lean exclusively on Peking, the same grim fate lies ahead, Tylka worries.

"Resistance to Peking can and will develop," he said. Rotating between Peking and PI 88788 can help slow that, but ultimately, the industry needs more genetic sources for a true integrated SCN management, he said.

To see the current and past market availability of PI 88788 and Peking soybean varieties, see this guide from Iowa State University here: https://www.plantpath.iastate.edu/…). 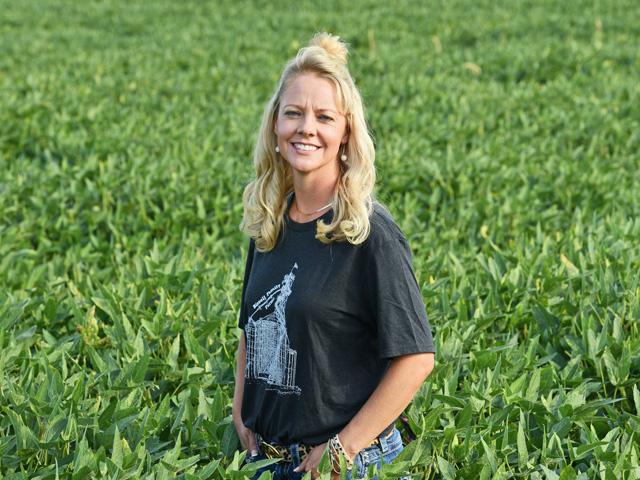