During the past several years, irrigation equipment manufacturers have been busy reinventing sprinkler systems to serve more as "hired hands" than just an efficient way to water crops.

From running self-diagnostics to reduce downtime and repairs to monitoring the crops in the field, the new generation of irrigation hardware is designed to help growers make better use of their water resources, meet environmental goals, operate with fewer employees and improve harvest yields.

And, as this technology continued to be integrated into new products, the art and science of irrigated agriculture is changing forever.

Progressive Farmer has been following the irrigation industry closely since the first center-pivot rig was installed in Nebraska in 1956, and now, 66 years later, this roundup of the latest offerings from major irrigation OEMs (original equipment manufacturers) catalogs how far technology has progressed. (See Part 2 of this story in the March issue of the magazine.)

Valley Irrigation added pivot-mounted high-resolution camera-based sensors to its aerial-image-based Valley Insights for the 2021 growing season, fully enabling center-pivot sprinkler systems to provide data on in-field plant health and other agronomic detections as the pivots water the fields. The new system with AI-driven (artificial intelligence) on-site imaging is called Plant Insights and transforms the center pivot into a crop-monitoring machine.

Both systems provide images to the company's AI center to be processed through machine-learning software that can identify potential diseases, insect issues and overall plant health. The results of the AI evaluation of field data are used to generate alerts to growers pinpointing field locations of potential problems.

Additional pivot technology from Valley for the coming year includes onboard machine diagnostics monitoring within the company's Valley 365 pivot-control program; EnCompass, a system to provide uniform water application for corner machines; and a high-speed pivot-control system, X-Tec HS, which can move a seven-span sprinkler in a full circle in 90 minutes for crop protection or light water applications.

In addition to keeping an eye on the crop, new engineering from Valley allows the pivot to monitor its own condition on the go.

"For the 2022 growing season, we've upgraded the icon panel introduced in 2017 to include machine diagnostics through a touch-screen interface," he explained. "The basic system monitors tire pressure and span alignment, and uses cellular telemetry to alert growers of potential problems and pinpoint the section of the pivot of the safety or alignment fault."

Span alignment is a key diagnostic tool because it indicates problems with tower speed and movement, which can mean problems with tire inflation, traction or driveline condition.

"This system can save significant time by alerting the operator of the exact span triggering fault codes," Long explained. "In the past, when tires went flat, got stuck or gearboxes failed, it meant walking or driving the length of the machine to determine the location of the problem."

Long said additional diagnostics are available through the program, including the addition of water pressure transducers along the span to measure pressure drops.

"Most typically, one would place a transducer at the pivot and another toward the end of the span," he explained. "Feedback from these pressure measurements could allow growers using variable-frequency pumps to speed up or slow down to ensure adequate flow to the end nozzles."

"The system measures how fast the arm is moving, and knowing each corner sprinkler's available flow and field position, it determines the sprinkler pulse rate to deliver the correct amount of water," he added. "Also, it operates in a leading or trailing position, and functions around obstacles.

"The EnCompass system is controlled through proprietary circuitry while using Valley's VRI iS (Variable Rate Irrigation Individual Sprinkler) sprinkler valve hardware to control the amount of water delivered by the corner," Gerdes added.

EnCompass is available for new installations and retrofits on any Valley corner machine.

Irrigators can choose a two-way control valve for well water or a three-way valve for surface water, Gerdes explained.

To further improve the utility of center-pivot sprinklers, Valley responded this past year to the needs of potato growers with a high-speed variable-frequency drive system that allows them to efficiently apply foliar crop protectants in a timely manner -- a full 120-acre circle in 90 minutes.

"Growers there need to apply chemicals every eight to 10 days and wanted to use their pivots to save labor and field time, but needed to be able to apply their products at label water mixture rates and in a manner to keep the product on the leaf and not wash down the plant to the ground," explained Aaron Caughey, Valley senior product manager.

-- "X-Tec HS (high speed) is an upgraded version of Valley Irrigation's X-Tec VR motor that promises to find users across the country," he said. "Like the X-Tec before it, the high-speed version is a durable constant-move system that likely will find favor with growers who need light, quick watering to germinate small-seeded crops or those who need the ability to make a light watering to prevent wind erosion on light soils," he explained. "We've already sold one high-profile machine to an apple producer who wants to use it for spring frost protection where a quick light misting of water is needed."

Caughey said the HS motor with the largest irrigation tire choice can move nearly 96 feet per minute and on a seven-span machine that means a full circle in 90 minutes. That's compared with about a four-hour trip for the existing X-Tec motor.

He said the current system is primarily designed for fields with no more than a 5% slope because of torque limitations.

"We're moving the sprinkler 10 times faster, but we're not using 10 times the horsepower, so there are torque limits associated with pulling heavy loads in high gear," he explained. "The 3 horsepower HS motor is designed to operate at an output speed of 343 rpm compared with the standard X-Tec, which runs at 34 rpm and develops 0.6 horsepower."

Caughey said about 80 X-Tec HS machines had been sold in the first two months after their release in September 2021.

The big news from Lindsay Corp. for 2022 is a major redesign of its current remote pivot-control program, FieldNET, to give users more intuitive access to the growing number of center-pivot functions that contribute to both machine health and plant health.

"The overhaul is underway now and likely will be available commercially to growers after beta tests are completed during the 2022 growing season," said Reece Andrews, product manager for FieldNET and Zimmatic Controls. He said the redesign is a continuous improvement of FieldNET, first released in 2007, to give irrigators more user-friendly access to today's growing portfolio of pivot technology.

"Our new smart-pivot platform is birthing a new generation of product and will change the way growers irrigate over time as technology evolves with new sensors and features," he said.

"Equipment downtime is an expensive proposition when you're farming, and growers have been asking us if FieldNET could be used to send them a message of 'which tower shut down?' We want to give them what they want," he continued. "Also, we want to help them identify what caused the problem, whether it be component failure or field conditions, and smart pivot will be able to do that."

Andrews said the backbone of the smart pivot is a system of tower sensors that monitors alignment angles in relationship to other towers.

"Using that information, a machine-learning system can be used to send the customer the information they want on the location of a possible failure, saving them valuable time in pinpointing the problem," he explained. "Quicker diagnosis means less time in the field to get the machine back in service. It's all part of boosting overall productivity, particularly in times of labor shortages."

In addition, Andrews said the system could be used to measure amperage draw of drive motors, red-flagging potential system problems in components such as gearboxes before they fail.

"Also, we're capable of adding monitors to pivot tires, not only to measure tire pressure but which can be preset to return the machine to the nearest service road for repair before it destroys a tire or other components in case of low pressures."

"The potential water savings on a single field using FieldNET Advisor can amount to millions of gallons, giving the grower more for less, and we want that to be replicated with all of our growers, because efficient agricultural water use is so vital," Andrews said. "There is a learning curve to using FieldNET Advisor, and the rewrite is also aimed at flattening that curve."

The company also recently released FieldNET with WaterTrend, a new feature within the FieldNET platform that uses the same science and data that goes into FieldNET Advisor at no additional cost to subscribers.

"WaterTrend has been included free in the system and provides decision-making information on water scheduling based on soil types, crop-growth modeling, local weather and precipitation data. This delivers a next seven-day crop water-usage forecast," Andrews explained.

Also, the new smart-pivot system is being designed to make it easier to set up and use FieldNET, regardless of how or where field maps and yield information is generated or stored.

"Part of our goal is to improve our customers' access to their data across platforms," Andrews noted. "APIs (application programming interfaces) are in place between FieldNET and our customers' other trusted advisers, so if someone uses, for instance, the John Deere Operations Center instead of redrawing that information into FieldNET, they can connect the two platforms, allowing both to automatically use their information," he explained. "We're trying to make the use of very complex engineering as easy as possible for our growers to use."

During the past two years, Reinke Irrigation has taken major steps to help irrigators improve scheduling decisions and provide more uniform water application to fields where corner arms extend the reach of their center pivots.

"You can see the difference in the crops in the corners during the growing season," he explained after watching the performance of five ESAC units on his farm during the 2020-21 growing season. "There are no yellow streaks and a much more uniform green in those rows."

Gross said applying the right amount of water under the swing arms has always been problematic but explained that with the ESAC system, he sees no over- or underwatering of corner rows.

"Just from that standpoint, adopting these into our machines makes sense," he said.

Ken Goodall, Reinke's director of North American sales, said the ESAC technology is one of the only corner-arm systems available to qualify for water-efficiency cost share under the Farm Service Agency's Environmental Quality Incentive Program.

"ESAC provides subcentimeter accuracy across its application area using GPS and three unit-mounted antennas for precise control both forward and backward," he explained. "That guidance, coupled with the system's ability to provide pulsed water flow to every nozzle on the span, makes it possible to water corners precisely across field map 10- by 10-foot grids."

Goodall said ESAC is designed specifically to provide water uniformity through all the variables of a moving swing arm mounted to a moving center-pivot machine. Its advanced technology also makes it capable of prescription watering to meet soil type and terrain variabilities.

"Based on the field maps, the system can find the single largest and single smallest pieces of the field and waters them accordingly," he added.

In addition to the onboard technology of ESAC, Reinke has also partnered with CropX to incorporate its soil-moisture monitoring technology into Reinke pivots through the RC-10 Rain Cloud controller system.

This is the last story in the High on Tech series. To see the others, go to: 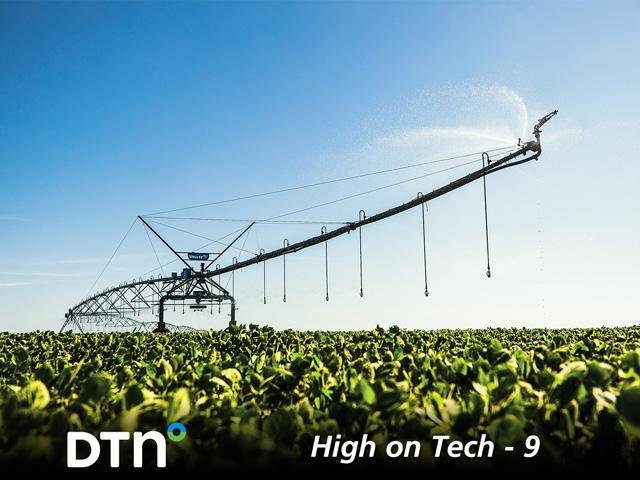