Andrew Nelson's request seemed easy enough: he wanted an app to track the grain that comes into and came out of his bins.

Indeed, there was an app or three out there for that.

It's just that there weren't any that did exactly what he wanted, exactly how he wanted it. He prized simplicity, and none measured up.

"I'll have an employee who comes on for one day, or sometimes when we start harvest people drop out and you have to replace them," Nelson said last summer, days before his combines were start on his 2021 wheat crop in eastern Washington. "There are some programs, but nothing simple. I need something I can teach to those employees in literally one minute."

Nelson's not the kind of farmer to settle for well enough or to wish away his time considering flaws in products. He's the kind to step back and build an app that does exactly what he wants, how he wants.

So, upon returning to the family operation outside Farmington a decade ago, one of the first things he built was an app that tracked grain on his terms.

It's an approach he brings to nearly everything on the farm, from scouting to spraying, planting to harvest.

He's not a new kind of farmer. Modifying tools to a task or taste is about as native to farming as planting seeds in soil. Where a previous generation did it with some welding and maybe a roll of duct tape, Nelson opts for a laptop.

He's turning the 8,500 acres of rolling, wheat-laden hills he farms with his father into one of the country's most high-tech farms, an operation that leans on remote sensors and autonomy, artificial intelligence (AI) and spreadsheets to revolutionize his family farm.

Nelson is the fifth generation of his family to work the Palouse, the hilly region of eastern Washington and western Idaho, which accounts for some of the country's top wheat acres.

He grew up helping and always loved the farm, but left to get bachelor's degrees in business administration and software engineering at the University of Washington. He spent five more years as a software consultant in Seattle, working with the likes of Microsoft and contemplating a move to Silicon Valley.

But he opted to come back to the farm instead.

Today, a decade after returning home, that history as both a big-city software engineer and a boots-in-the-dirt farmer can leave him feeling caught in a clash of cultures. Few of the farmers he bumps into at the local elevator do software consulting on the side, as Nelson still does. Few of the people he encounters in software also run combines for a month every summer.

"My whole life, I've been like that," he said. "I've always been excited by tech stuff and different things. I'm used to it, I guess. Sometimes, there are clashes for good reasons and sometimes, just because what I'm doing is different."

It's enough to cause neighbors to whisper, word occasionally making its way back to Nelson that some wonder if all his gadgets are just a waste of time.

Nelson doesn't go down the road to argue or persuade those neighbors, but he said his crops do the talking.

"Some people might think I'm wasting my time, but when I used a drone to scout our fields this year for cover-crop planting, it 100% was not a waste," he said. "I was able to purposefully draw where I was placing that canola for a grassy weed issue, and I captured every single spot of grass."

That field has acted as a good proof of concept for Nelson.

It's right across from the family home he shares with wife, Kara, and sons Davin, 5, and Callum, 3. Patches of Italian ryegrass taunted Nelson and his father all growing season, and when it came time to hit them the following spring, he ran a small experiment.

He and his dad had farmed the field and taken special notice of the grass. Surely, they'd be able to pinpoint the trouble spots, right? They gave it a shot, drawing maps of the grass as they recalled it before turning to the data gathered by aerial scouting drones, one of the tools that had turned neighbors skeptical.

"We missed 40% of it," Nelson said. "Last year's scouting is starting to help a lot. Now, some fields I have four years of data to go with."

He's seen payoff in his legume rotation, where he's been able to drastically reduce his expenses for preemerge chemical because he knows exactly where he had weed problems the year prior.

"I'm starting to do custom applications for different preemergence," he said. "Some of those chemicals are really expensive, and I'll definitely spend the time with drone imagery to find where I can use chemical that costs a fifth or even a tenth as much on spots that don't need the expensive chemical."

Nelson loves the tech wizardry but strives to not be driven by it, consistently finding clever ways to recycle sensors and equipment he's replacing while looking always for a tangible return on investment.

"I paid for my first drone in my first year," he said. "After stitching together my scouting information, I saw I only had to spray 10% of the field with herbicide we were going to use. That right there was enough to pay for the drone."

Scouting only accounts for one wing of the Nelson drone air force. He flies five drones. A DJI Mavic 2 Pro was his first and is somewhat retired, replaced by a pair of DJI Phantom 4 Pros, which have a camera more suited to scouting. Those are making a pass over every acre Nelson has at least once a season.

He also flies a DJI Matrice 300 RTK, a larger scouting drone. It carries a multispectral payload for more precise work. Last season, it mapped a garbanzo bean field ahead of a variable-rate burndown spraying, resulting in a 40% reduction in chemicals.

"It has high enough resolution it can see if there's one plant alive," Nelson said. "If something was mostly dead, I put less on, and I put the full rate on something fully green. It burned down very evenly."

The pride of the Nelson air armada is the DJI Agras T16, an aerial sprayer drone capable of carrying a little more than 4 gallons currently. So far, the use has been real, albeit limited. He sprayed 20 acres made inaccessible for weeks by wet weather. He has the technical capability to support up to six autonomous aerial spraying drones at once, but government regulations prevent that for now.

If that were to change, he said he could almost leave his ground rig parked except to border his fields.

"If I could run six drones at once, I'd do it in a heartbeat," he said.

The collection may grow, too. Nelson's been eyeing a European company that's designing an aerial drone that will use sound to chase damaging animals out of crops. The idea would be to partner that technology with an AI-aided camera observing a field. When a herd of elk is detected -- a big problem in the area -- the drone could launch, drive the elk away and land to recharge.

It's not all about aerial drones. Nelson is also exploring robots that work on the ground, inherently more efficient than something airborne. His wheeled sprayer is laden with sensors, as are his fields.

He's laid down sensor packages throughout the land he works. Some are weather stations, recording wind, rain, temperature, humidity, soil moisture and soil temperature. All track CO2, "so we can better understand actual carbon sequestration in our fields," he said.

They feed data back to his headquarters using TV white space, a way to broadcast internet connectivity over unused TV channels in rural areas.

All that effort put into technology hasn't led to days on the beach for Nelson. In fact, he even balks at the idea it makes him a better farmer than the generations that came before.

"It's not better. It's just different," Nelson said. "Farms have had to grow so much over the years, and we have more constraints on our labor now than we used to. A lot of the time, I'm finding technological solutions to do things the way my grandpa did it. He was farming 800 acres and was able to see all his land every day. At the size we're at, I can't do that."

Nelson can't drive by every acre of his 8,500 acres even once a week, but he has a camera in most fields, making a virtual drive-by possible every morning.

"I'm trying to take this large farm and shrink it down in size to make it manageable for someone to actually farm," Nelson said. "It's not that we're doing it better. It's that we're taking what was done and applying it to more acres, which, unfortunately, we need to do these days." 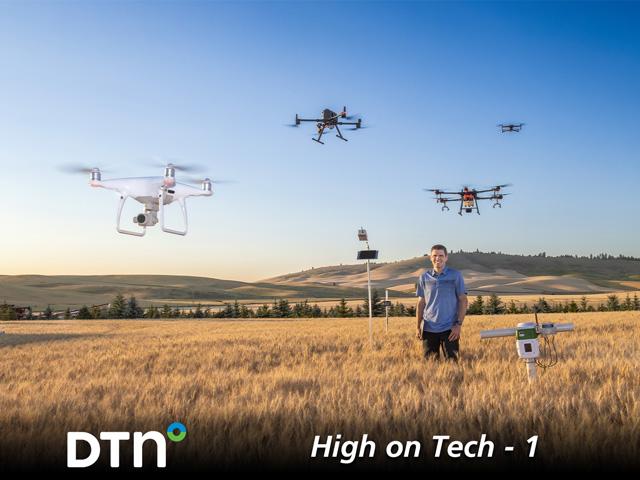