Deere will have more than 10 but less than 50 of its newly launched autonomous 8R tractors out working the 2022 crop year.

The autonomous 8R tractor relies on six pairs of stereo cameras that continuously check its position relative to a geofence, ensuring it's operating where it's supposed to within an accuracy of less than an inch.

To operate the autonomous tractor, farmers transport the machine to a field and configure it for autonomous operation.

Using a John Deere Operations Center Mobile app, they swipe from left to right to start the machine. This system does not move among rural road systems autonomously.

Beyond technologies, Deere understands there is an issue it must satisfy as it rolls out autonomous 8Rs. Can farmers trust it? Can they swipe the app on their phone, get the signal the tractor is ready, execute the task and then just walk away from a 40,000-pound machine working on its own?

Julian Sanchez, director of emerging technology at Deere, understands the assignment. "That requires a tremendous amount of trust," he conceded. "We're asking the farmer to hand over a task that needs to be done to their standards of quality; otherwise, it'll impact their crop and ultimately, their livelihood. So, all this technology (we've shared with you) is ultimately intended to earn and keep that trust."

The stereo cameras mounted front and back on the tractor give the autonomous 8R a 360-degree ability to detect obstacles and calculate distance within the environment of the field.

Images captured by the cameras are passed through a deep neural network that classifies each pixel in approximately 100 milliseconds and determines if the machine continues to move or stop. That network is built upon a large selection of images from Deere's 50-million-image library.

The autonomous 8Rs also collect new images as they operate. In essence, the technology continues to learn from its interactions in specific farm fields, and those images eventually update the 8R tractor's algorithms by way of over-the-air downloads.

"What's unique about this autonomous tractor isn't just the technology ... (but) it is ready today for production," said Deanna Kovar, vice president of the production and precision ag business at Deere. "This isn't a concept. This isn't a demo. This is a working machine that will be available later this year to farmers."

While the machine is working, the farmer can leave the field to focus on other tasks while still monitoring the machine's status and performance from his or her mobile device.

A FIX TO SKILLED LABOR

The Operations Center app gives managers access to live video, images, data and metrics on machine performance. Speed can be adjusted and performance optimized. If there is a mechanical issue, the farmer will be notified remotely.

For avoidance, the tractor has an anomaly detection system with a hard stop function that halts operations if the machine sees something it does not recognize. In Deere's video presentation at the CES, for example, a billboard falls into a field. The autonomous 8R tractor would stop because it does not recognize the billboard laying on the ground.

"Farmers anywhere in the world (tell us that) finding skilled labor to run machines is always at the top of the list of their pain points," Kovar said. "Customers tell us they're ready for autonomy, it is a natural evolution of what they've been doing for (the last) 20 years."

Watch the video at https://www.dtnpf.com/….

To see other stories in this High on Tech series, go to: 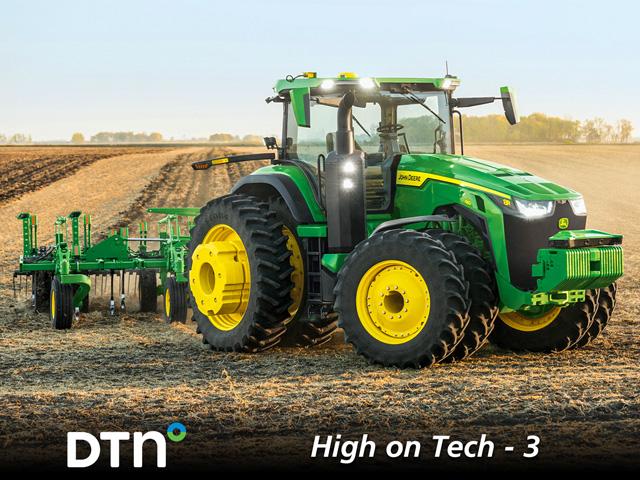