That scenario further complicates a complex planting decision for farmers this year. Lofty input prices, fertilizer supply uncertainties and lucrative soybean prices may be enticing some to consider shifting corn acres to soybeans. But The SCN Coalition, a public, checkoff and private partnership that encourages SCN management, is urging farmers to factor the long-term agronomic trade-off of additional nematode pressure into the equation.

Those who decide to plant back-to-back soybeans will also have additional management options to consider, including scrutinizing varietal resistance and possible use of nematode-protectant seed treatments, according to The SCN Coalition scientists.

Planting an SCN-resistant variety has long been the farmer's first line of defense against the parasitic nematode. But SCN has become resistant to the resistance in many fields. The main source of SCN resistance, known as PI 88788, has been used in about 95% of the commercial SCN-resistant soybean varieties for decades. While new sources of resistance have become available in recent years, those remain a small percentage of seed offerings.

Data from 15 years of variety trial experiments in growers' fields in Iowa revealed increased reproduction of SCN populations on PI 88788-resistant varieties can decrease yield by as much as 14 bushels per acre (bpa), which represents a 23% yield loss. That equates to revenue loss of about $190 per acre at current new-crop soybean futures prices.

Tylka noted these studies were conducted in farmer fields with a traditional corn-soybean rotation. Farmers can expect higher yield losses when planting soybeans consecutive years in SCN-infested fields, he noted.

Soybean cyst nematode soil testing was incorporated into the UW research, and SCN population densities were greater in consecutive years of soybeans versus rotating with a non-host crop like corn.

"We experienced a 10% yield loss moving from a corn-bean rotation -- not just from SCN, but losses from the whole disease complex," said Shawn Conley, UW agronomist and one of the authors of the study. "Take a conservative 60 bpa yield down to 54 bpa and a 6 bpa (loss) times $12.50 per bushel equals a $75 loss."

Rotating to a non-host crop like corn or wheat has been the general recommendation to help control SCN reproduction. Research is mixed whether cover crops can help reduce SCN threats.

Weeds can also increase the ability of the nematode to reproduce. Purdue scientists have documented six winter annual weeds that roll out the welcome mat for SCN. Purple deadnettle is considered the most compatible host. Henbit is also considered a strong host. Field pennycress is a moderate host. Shepherd's purse, small-flowered bittercress and common chickweed are considered weak hosts.

In fact, the Purdue researchers found in the greenhouse, SCN reproduction on purple deadnettle and henbit was so efficient it often equaled or exceeded SCN-susceptible soybean, confirmed Purdue University researcher Bill Johnson.

Soybean cyst nematode is sneaky. Soybeans often look healthy above ground, even when the nematode is sucking down yield potential below ground. If you missed sampling for the pest last fall, spring offers another good opportunity, according to University of Kentucky plant pathologist Carl Bradley.

"It's important to know if SCN is present because the pest continues to spread and, without active management, population densities will continue to increase. It's easier to keep low numbers low than to bring high SCN populations down," Bradley said. In general, the SCN Coalition recommends soybean fields be tested for SCN every three to five years or every second or third soybean crop.

Bradley also reminds growers that SCN remains in the soil even when a crop is not present. Soybean cyst nematode has been found in nearly every soybean-producing state.

"If you planted soybeans in 2021, the odds are high that SCN was present in that field, and if soybeans are grown in 2022, SCN population densities will rise, resulting in a larger yield impact," Bradley said.

Rotating to another varietal resistance is key to management, and that's getting easier as more seed companies add alternative sources of resistance. If you grew a PI 88788-resistant soybean variety in your last rotation, plant a variety with SCN resistance from Peking or PI 89772, recommended Tylka.

Soybean cyst nematode resistance source is not always revealed in commercial seed offerings, however. "Companies should be able to tell you what resistance is contained within the variety," Tylka said. "If they won't or if they don't know, consider buying other varieties for which the source of SCN resistance is known."

Nematode-protectant seed treatments are another tool that can help control SCN numbers early in the growing season, said University of Missouri plant pathologist Kaitlyn Bissonnette. "The life cycle of SCN begins with the adult SCN female in the soil, which can produce up to 250 eggs per generation," she said. "Depending on where you farm, there can be four to six generations of SCN per year.

"One reason to consider a seed treatment, especially if you are planting soybeans back-to-back, is to control nematodes early in the season," added Bissonnette. "Seed treatments can have an impact on any of three juvenile stages: the unhatched juvenile, the hatching juvenile and the penetrating juvenile."

University of Arkansas System Division of Agriculture plant pathologist Travis Faske points out that farmers in Southern states face additional nematode challenges when considering growing soybeans back-to-back. "Based on soil sampling, we know Southern root-knot nematode (SRKN) is the most common threat in Arkansas," he said. "The Cotton Belt is associated with the highest population densities and distribution of SRKN."

Faske recommends farmers in this Southern region test soil every three to five years to determine which nematode or nematodes are present and to see if population densities have changed. "If your main threat is SRKN, there are a few varieties that offer resistance, and seed-applied nematicides are also popular to consider," he said. "Managing SRKN is more challenging because corn and cotton are also susceptible hosts. Planting cotton varieties with SRKN resistance can help control population densities." 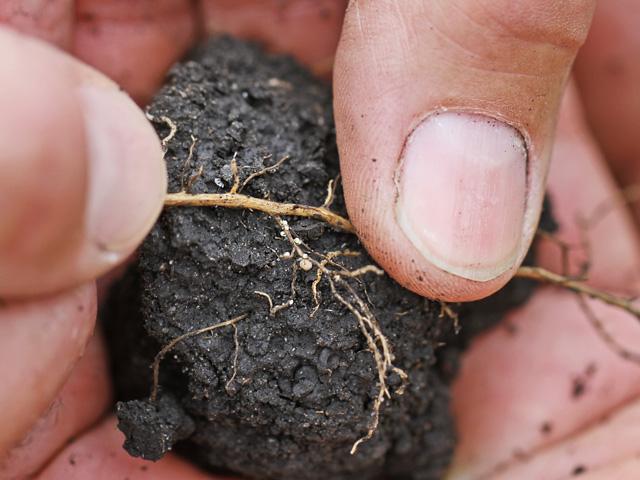