ROCKVILLE, Md. (DTN) -- The fight against soybean cyst nematodes has been a long, slow battle, but a different kind of weaponry is on the horizon.

In June, EPA granted BASF a registration for a Bt soybean trait targeting SCN. The trait, currently known as GMB151, was divested to BASF from Bayer in 2018 and is still years from farmers' fields. For now, it is only registered for use as breeding material, and BASF told DTN commercialization is likely to fall "in the latter half of the decade."

Nor is it a silver bullet for the pest. In its petition for registration, BASF defined the trait as offering "moderate suppression of SCN."

Nonetheless, it's a promising development for the soybean industry, which has struggled to find new commercial solutions to SCN's growing ability to infest and rob yield from the most prominent SCN-resistant soybean trait on the market, PI 88788.

The BASF trait expresses a new Bt protein, Cry14Ab-1, which damages the gut the of soybean cyst nematodes when they ingest it. The trait would likely come to market stacked with other SCN-resistant varieties on the market.

BASF's Bt soybean would be a first for the industry in many ways.

No other Bt protein on the market targets nematodes, and no other seed company has brought a Bt soybean variety to market in the U.S.

At one point, Monsanto had plans for a U.S. launch of its Bt soybean varieties, which target caterpillar pests and are sold in South America under the brand name Intacta. But the project was shelved two years ago, likely because of the mounting resistance among U.S. insect populations to those Bt proteins, which are also used in corn and cotton varieties here. See more here: https://www.dtnpf.com/…

GMB151 is a novel Bt protein; it is not used in any other crops yet. BASF has tested it against a variety of insects to ensure it won't affect nontarget organisms such as earthworms, bees or the wide variety of free-living nematodes that dwell in soils. It was also tested for activity against a range of other agricultural pests such as caterpillars and fungi. Through it all, Cry14Ab-1 appeared to have no activity or effect on any species except one other nematode, the common roundworm, C. elegans, EPA concluded.

"After reviewing the submitted and publicly available data and information for Cry14Ab-1, EPA concludes that there is a reasonable certainty of no harm from residues of this new active ingredient and that its uses will not cause unreasonable adverse effects to human health or the environment," the agency stated in its registration decision.

Until EPA issues a Section 3 registration for full commercialization of varieties containing this trait, the industry won't know what type of resistance management BASF will pursue for GMB151.

Resistance management for SCN has been a weak spot in the industry, which allowed a single source of genetic resistance, PI 88788, to dominate 98% of all SCN-resistant varieties on the market. Other sources of genetic resistance, such as Peking or a new Syngenta trait, PI 89772, only account for a fraction of available soybean varieties. See more here: https://www.dtnpf.com/….

The American Soybean Association raised the issue in its letter to EPA in support of the new trait's registration, calling it "critical" for "steps [to] be taken to mitigate SCN from developing resistance to Cry14Ab-1."

"U.S. soybean growers would like the management benefits offered by this tool for many years to come," the letter added.

BASF couldn't comment in detail on what a resistance management strategy for GMB151 would look like but did state that non-Bt refuges -- a common Bt crop management tool in the U.S. -- would be considered.

"A resistance management plan will be submitted at the time of application for a Section 3 Commercial registration," the company said in its emailed statement. "One of the many points of discussion includes the effectiveness of refuge with a nematode trait."

However, in the company's petition to EPA for registration, BASF states that it considers the risk of SCN evolving resistance to Cry14Ab-1 to be "moderate or low." For evidence, the company points to the trait's "uniqueness" as a mode of action, its likely stack with other SCN-resistant traits, and the low mobility of nematodes.

"Population-level selection of SCN by GMB151 is further limited by the mobility of these microscopic animals," the BASF petition reads. "Only the proportion of the nematode population in close proximity to GMB151 roots will experience selection with Cry14Ab-1. This leaves significant portions of each generation of SCN in soil that will not encounter the Bt protein expressed by GMB151. Beginning with the first seedling roots and continuing through mature soybean root system development, the Cry14Ab-1 protein is conveyed to the pest via growth of the root system. The net result is low or moderate selection for resistance."

The company said it would continue to promote integrated pest management strategies, such as rotating to non-host crops, using nematicides and switching to other sources of resistance, when the Bt trait comes to market.

You can read more about the trait in BASF and EPA's registration documents here: https://beta.regulations.gov/….

See more on the spread and management of soybean cyst nematode from the SCN Coalition here: https://www.thescncoalition.com/…. 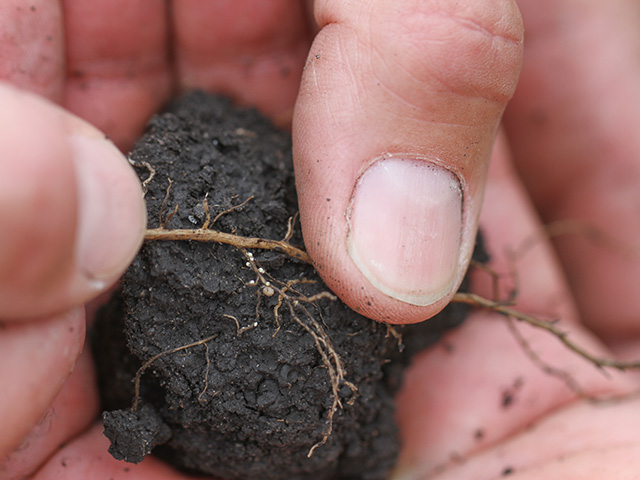