ROCKVILLE, Md. (DTN) -- Sulfur has long been a necessary ingredient for corn crops to grow, thrive and maximize yield. But how your corn crop gets its fill of this key nutrient is changing every year.

"The huge change is in sulfur deposition," explained University of Minnesota soil science researcher Jeff Vetsch in a university webinar on Jan. 26. Back in the 1970s and '80s, coal-fired power plants filled the air with millions of tons of sulfur dioxide each year.

Since then, a series of new regulations, most stemming from the Clean Air Act, have scrubbed our air of this pollutant, lowering sulfur dioxide concentrations by 94% between 1980 and 2020, according to EPA's latest estimates.

While that's good news for Americans' lungs, it means corn plants are getting less sulfur from the atmosphere, with the concentrations slipping below 1 lb per acre annually in the upper Midwest, Vetsch noted.

As a result, sulfur fertilizer applications increasingly pay off for Minnesota farmers, Vetsch and University of Minnesota soil scientist Dan Kaiser noted in the webinar. You don't need much, they cautioned. Most Minnesota cornfields won't show an economic return on much more than 10 lbs/acre, Kaiser noted, with the needs of even the most sulfur-hungry forage fields topping out at 25 lbs/acre.

But before resorting to sulfur fertilizers, here are four places your corn field might get enough of this important nutrient.

Organic matter remains the most common and best source of sulfur for corn crops, Kaiser said. That's why he values a field's organic matter composition above even soil lab tests when determining a field's need for extra sulfur.

"There are all kinds of different soil tests out there, but to me, organic matter is the best option to gauge the availability of sulfur," he said.

As soil organic matter breaks down, the sulfur is mineralized, making it available for plants. Minnesota farmers, for example, can expect three to five pounds of sulfur to be mineralized and available for each percent of organic matter in the top six inches of soil each year, according to the university's Extension guide to sulfur management.

As a result, sandy, low-organic matter soils can often be at higher risk for yield-robbing sulfur deficiencies, the Minnesota scientists explained.

Yes, sulfur dioxide emissions have plummeted, but power plants still pump out well over half a million tons a year, according to EPA's latest measurements. This form of sulfur is absorbed by rainfall, which falls on soils and crops. Fields near fuel-burning industrial facilities are more likely to have higher sulfur dioxide levels in the air, EPA says.

You can find estimates on how much sulfur dioxide is in the air in your region here: https://www.epa.gov/…. In general, most Minnesota farmers probably can't bank on getting any more than a pound of sulfur per acre from the air, the Minnesota scientists said.

For farmers with access to irrigation, a lab test for sulfates in your water might be worthwhile, Kaiser said. For some, this source could meet your crop's total sulfur needs.

"The numbers we've seen from [Minnesota] wells we've tested have been relatively high," he said. "They all have been at least 20 lbs annually -- minimum."

Fertilizer sources of other nutrients, namely nitrogen, phosphorus and potassium, can sometimes offer some sulfur, but that likelihood has declined in recent years, the University of Minnesota guide notes.

"In the past, commercial fertilizers supplied considerable [sulfur] in addition to the usual N, P2O5, and K2O," the guide noted. "Today, as the fertilizer products become more concentrated and the analysis increases, [sulfur] contents are less."

Livestock manure is another good source of sulfur. See an estimate of sulfur concentrations in different manure types here: https://extension.psu.edu/….

The good news is if your corn isn't getting enough sulfur from organic matter, air, irrigation water or fertilizer, the plants will tell you.

Sulfur deficiency tends to be highly visible, resulting in pale or striped corn leaves early in the season. See more from DTN on diagnosing this deficiency -- and preventing it -- here: https://www.dtnpf.com/….

For more information on sulfur-based fertilizers and sulfur management, see this guide from the University of Minnesota: https://extension.umn.edu/… and this recent article from Purdue University here: https://www.agry.purdue.edu/….

For more information on the University of Minnesota webinar on sulfur, visit this webpage: https://extension.umn.edu/…. 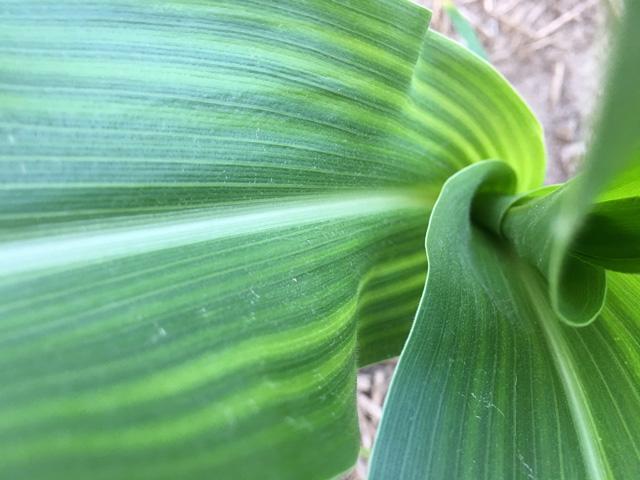