Those unattractive yellow-white streaks on a corn leaf are seldom good news. At their worst, they signal herbicide injury or more commonly, a nutrient deficiency. At their best, they are a sign of a benign genetic response.

Since Scott Wallis's favorite color for his cornfields is "so dark green it's darn near black," the Princeton, Indiana, farmer has taken special care to avoid early summer stripes. For his fields, the source is almost always sulfur deficiency, and a careful fertilizing protocol has sidelined the streaking and bumped his yields, he told DTN.

It's a good investment to get to the bottom of your striped corn leaves, agreed Dan Quinn, Extension corn specialist with Purdue University. "Take tissue samples from the good areas and the bad areas, and soil samples, as well, and compare those results," he recommended. "It's worthwhile -- especially if it's sulfur deficiency."

Here's a quick review of the possible causes of striping.

Sulfur deficiency is the most common source of corn striping in Indiana and is becoming a more prominent nutrient deficiency in corn in general, Quinn noted.

The problem? Our clean air. In the past, coal-fired plants reliably belched sulfates into the air each year. It wasn't great for humans, but crops slurped some of it up and utilized the nutrient to help with photosynthesis and nitrogen uptake.

But EPA estimates that ongoing programs originating from the Clean Air Act of 1970 have reduced sulfate pollution by 55% in the eastern U.S. over the past three decades, which means crops aren't getting such a heavy dose anymore. "We expect [less than] 5 pounds of sulfur per acre from the air," Quinn estimated. Depending on your depletion rate and soil type, that might not cut it.

Wallis, who lives less than a dozen miles from a huge coal-fired power plant, started noticing this drop in the early 2000s. "The crop has a lighter cast to it, and when you go look, you see the striping coming out of the center of the plant," he said. Caused by interveinal chlorosis, this streaky effect will be most prominent on the new, upper growth of the plant, Quinn added.

It will be most severe on fields where sulfur mineralization is struggling to occur, most commonly fields with low organic matter, such as coarse-textured, sandy soils and hill slopes, Quinn said.

Taking a tissue sample to confirm the deficiency is well worth your time, he said. Past Purdue research has shown that severe sulfur deficiencies can cause up to 20- to 30-bushels per acre (bpa) yield losses.

"Nitrogen-to-sulfur ratio is something to pay attention to," Quinn explained. "If it's greater than 15:1 to 20:1, that can indicate you have some level of sulfur deficiency." He recommends adding about 15 pounds of sulfur per acre at sidedress, if possible.

Wallis aims for a 7:1 ratio of nitrogen to sulfur and to get there, he has added sulfur to both his 2 x 2 application at planting and his sidedress application. "When we get done with the whole program, we add about 33 to 36 units of sulfur per acre each year," he estimated.

OTHER DEFICIENCIES: ZINC, MAGNESIUM AND MANGANESE

Parsing out the possible nutrient deficiencies is tricky visually, so Quinn recommends tissue sampling to be sure.

Zinc deficiency is more common in sandy or high pH soils, often where a lot of phosphorus is applied, he said. Magnesium and manganese deficiencies are more rare. An Iowa State University guide to striped corn notes they are also more common in acidic, coarse-textured soils, with manganese deficiency cropping up more often in high organic matter soils, such as muck and peat. One helpful distinction is that striping from magnesium deficiency is more likely to affect older leaves, since magnesium is very mobile in the plant, whereas striping from a lack of manganese will primarily affect new growth.

The Iowa State guide notes that striping from herbicide carryover is also not uncommon in dry, hot years.

"Late applications of fomesafen can cause veinal chlorosis (actually whitening of the veins) not interveinal chlorosis," the article explains. " ... [P]lus the midrib will exhibit a pinkish-red color. The leaves may become floppy due to loss of integrity of the midrib. Plants can recover from this injury, but at times there can be stand loss depending on the severity of the carryover."

Last, and also least in terms of importance, is striping that occurs from a genetic response within a hybrid.

The effect isn't well understood, is unlikely to affect yield and nothing can be done to change it, Quinn and the ISU scientists noted. "This condition usually shows up on scattered plants in a field and tends to disappear over time," the ISU article noted. "There is no cause for alarm, nor is there anything that can be done to mitigate this condition." 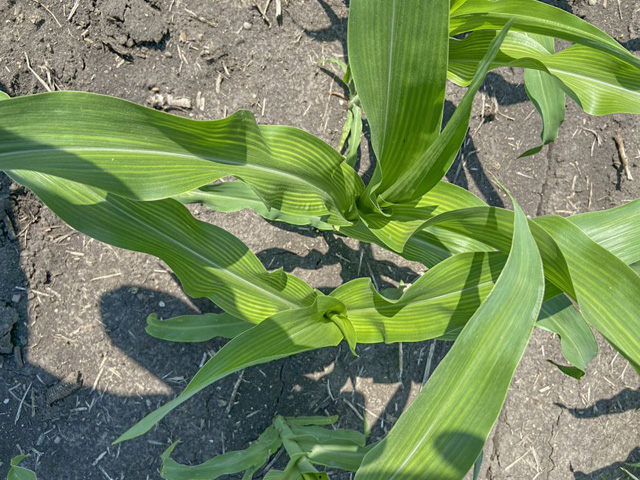