OMAHA (DTN) -- The president and CEO of Mosaic Co., James "Joc" O'Rourke, rejected the idea that U.S. or Brazilian farmers may dial back fertilizer applications because of tight supplies and historically high prices for fertilizer products.

Stronger crop markets, combined with global industry supply constraints, are the key drivers pushing fertilizer pricing higher in both North and South America. On phosphate specifically, Mosaic stated the supply and demand balance will remain tight beyond 2021, but lower-than-normal stocks-to-use ratios for grains will point to the need for increased crop production. Despite higher costs, Mosaic sees farmer economics in 2022 continuing to incentivize maximum yields by applying fertilizer.

China further added to concerns over phosphate fertilizers by announcing a freeze on exports that is expected to continue through at least the first half of 2022. China also is incentivizing its domestic producers to maximize production.

Read more about it here: https://www.dtnpf.com/….

A spokesman for Mosaic did not respond to a question from DTN about the farm groups' court brief seeking to overturn the import tariffs. The role of U.S. import tariffs against Moroccan and Russian phosphate companies also did not come up in Tuesday's question and answer with analysts and Mosaic executives.

DAP and MAP prices in New Orleans, Louisiana, have shot up to more than twice their price from a year ago with both products now over $800 a ton. Hurricane Ida and an equipment failure at its New Wales facility in Florida resulted in a 300,000-metric-ton (mt) reduction in phosphate production in the third quarter. Phosphate production is expected to decline 100,000 mt for the fourth quarter compared to a year ago. With Mosaic's strong earnings, the company also is raising dividends to shareholders by 50% to 30 cents a share with a target to raise the dividend to 45 cents a share in 2022 as well. Mosaic also has bought back 950,000 shares from shareholders.

O'Rourke said Mosaic does not expect to see potential demand destruction for either potash or phosphate because farmers have incentives to produce.

Looking at Brazil, at least one analyst noted comments from Brazilian farm groups encouraging farmers not to apply fertilizers at the price levels they are seeing now. O'Rourke noted fuel prices have gone up as well, but Brazilian farmers have benefited from the rise in commodity prices and Brazilian currency devaluation over the past couple of years, leading to good profitability for them. Overall, Brazil will be tight for fertilizer supply, but O'Rourke downplayed the idea that Brazilian farmers would dial back on their inputs.

"Our own belief is farmers like to farm, and they are not going to sacrifice yield by not fertilizing," O'Rourke said. "That's not a good economic solution for profitability."

O'Rourke suggested there might be some marginal ground in the U.S. and Brazil that does not get planted. But he pointed to the potentially low carryout for the 2021-22 corn crop, at a projected 10.1% in the U.S., as one of the drivers that will lead to possibly higher grain prices and a drive to plant acres next spring.

"Any kind of disruption or anything is going to cause a run-up of corn or soybeans or whatever it is," O'Rourke said. He added, "It's kind of a precarious spot for crops," adding if farmers plant less, that will lead to price spikes for crops.

O'Rourke added, "For good yields, you need the fertilizer. We need the crops, so if you put the two together, one of two things is going to happen. You either have to use a lot of fertilizer on a few acres, or you have to plant a lot of acres. In either case, we should be in good shape." 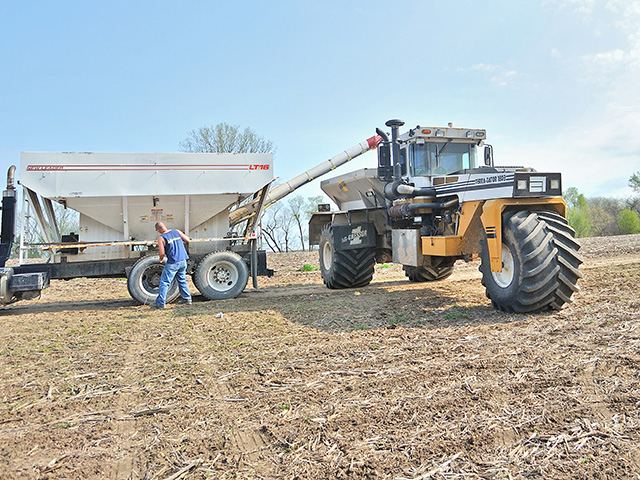