ROCKVILLE, Md. (DTN) -- By the time Tom Peters gets a call from a farmer with weeds that won't die, it's often too late to prevent the development of herbicide resistance in that field.

But there are almost always red flags that the farmer noticed along the way, said Peters, who serves as a weed control specialist and agronomist for both the University of Minnesota and North Dakota State University. He wants growers to change their strategy as soon as they see those in the future.

"I've heard producers sometimes say, 'Well, I saw some plants that weren't dying, but my first instinct was to blame someone -- the guy spraying, or the retailer,'" Peters told growers at a university webinar on pesticide resistance on June 23. "And what they really were seeing was the onset of resistance."

All agreed that the best defense was a proactive offense. "There is nothing that replaces scouting," as Peters put it. "You need to trust your instincts and your eyes, because usually what you're seeing is real."

It's easy to dismiss that first sign -- a weed that's still standing or a soybean aphid infestation that keeps growing.

Farmers, retailers and company representatives are often quick to look for other answers; they scrutinize the rates used, the application coverage, the environment and other problems that can produce poor pest control.

But resistance has some tell-tale signs, the Minnesota panelists noted. For weeds, it's the presence of dead plants alongside live ones, Peters said. "Or there's more of a range in between -- a waterhemp plant that's totally fried next to one that's damaged but alive, next to one that's living and thriving," he said. "That, to me, is the sign that resistance is coming on."

Nor will emerging herbicide resistance follow a pattern in the field, the way application errors might, he added. For example, if all your field edges have weed escapes, that's more likely poor coverage, as the spray boom is only getting a half rate to those distant rows. "Generally, weed resistance doesn't follow a pattern in the field," Peters said. "It will be more hit and miss."

With insects, the signs are even more subtle. Year after year, you may find you have to bump up rates to control the same populations, a phenomenon that MacRae calls "rate creep." Another sign is that the insecticide seems to wear off faster each year. "Overall, if you're starting to see less efficacy over the years, that's a warning bell," MacRae said.

Some pests are even sneakier. The corn rootworm does its damage underground, and the cost of trimmed roots often doesn't show up until a windstorm lodges plants or the combine finds reduced yields, Ostlie noted.

"In the end, the two most important indicators of what's happening are root injury and the sheer number of beetles emerging," Ostlie said. Watch for both carefully, because a little damage goes a long way, he warned. By the time rootworms have trimmed half a node of a pyramided Bt corn hybrid, recent research shows that a farmer may be facing 250 beetles per acre emerging, 33% of plants lodging and a 10% drop in yield, Ostlie said.

"The penalties for not recognizing developing resistance can be severe," he said. (See a DTN story on a new website tracking corn rootworm pressures here: https://www.dtnpf.com/….)

It can be hard to push for more answers, especially in the hustle of the growing season, but it's always easier to tackle a potential resistance problem early on, Peters warned. The first year you see problems, there might only be a few missed weeds; in the second year, it might only be a 100-foot area with weed escapes. Both are easy to brush off and hope for better next year.

"But then, by year three, it's the whole field and it's too late," Peters said. "I'd much rather address resistance in year two than in year three."

YOUR PESTICIDE USE HISTORY IS TOO SIMPLE

If you are worried about efficacy, scrutinize your field pesticide history.

Look beyond the brand names, said Nielsen. Licensing agreements among companies and generic production of ag chemicals can give farmers a false sense of an abundance of different options.

"There are often different names for the same base chemistry, and sometimes the farmer might not realize it is the same product he's used the last few years," Nielsen said.

The same goes for Bt corn hybrids. There are only nine distinct Bt proteins on the market, but they can be offered under a variety of different brand names and packages.

Farmers can use the Handy Bt Trait Table, which identifies each Bt protein in all commercial corn packages and lists which insects have evolved resistance to each one, found here: https://www.texasinsects.org/….

Do you see the same active ingredients in your field year after year? That's a big risk factor, the Minnesota panelists said.

To guard against resistance in weeds, scientists typically advise using multiple modes of actions within the same tank mix, and rotating crops, which can diversify your herbicide options. For insects, tank mixing different insecticide classes is not recommended, however.

"With insecticides, you're better off rotating single modes of action over time and hitting separate generations with each," MacRae explained. "And you can often easily do that because many insects have multiple generations within a year, especially the ones that tend to develop resistance quickly."

As for fungicides, the good news is that single-mode-of-action products are increasingly rare as companies are moving toward bundling different classes of fungicides into pre-mixed products. Fungicide resistance in corn and soybeans is also not as common as herbicide and insecticide resistance -- yet.

"Until the past 10 to 15 years, fungicides were not widely used on those crops, so there isn't as much long-term exposure," Malvick explained. But that is changing for some diseases, such as frogeye leaf spot, which has widely evolved resistance to QoI fungicides, or strobilurins. See more here: https://www.dtnpf.com/….

YOUR TANK MIX WORKED AGAINST YOU

Tank mixing different pesticides can be a tempting way to save passes across a field, but the practice can sometimes weaken the efficacy of individual ingredients and encourage resistance, some of the Minnesota panelists noted.

At issue are the different spray parameters each pesticide needs to work its best. For example, adding glyphosate into a tank of fungicides is a common and appealing idea for sugarbeet growers in the summer, Peters said. But fungicides require a very high water volume -- up to 25 gallons -- and a very fine droplet size for the best coverage. In contrast, glyphosate needs far less water and can use larger droplets because it translocates within the plant, Peters noted. The result of tank mixing them? One less pass, but sub-optimal glyphosate weed control.

"They are trying to take out two birds with one stone, but it is absolutely not helping with resistance management of glyphosate," Peters warned.

The same can be true of tank mixing certain insecticides and fungicides, which often need precise timing and threshold triggers to be effective and worthwhile, Nielsen added. A lot of farmers and retailers are tempted to add insecticides into a fungicide pass on soybeans, in an effort to control any soybean aphids around -- or vice versa. "But it might not be the proper timing for either one of those," Nielsen warned. "And that can cause problems with both pesticides down the road."

For insects, ignoring spray thresholds and treating too often is a major and common risk factor for resistance, MacRae noted. "One of the most important things is just not to spray unless you really need to," he said. "This 'Spray early, spray often' idea can get us into a lot of trouble."

Minnesota soybean growers are currently dealing with the fallout of overuse of pyrethroids against soybean aphids, as resistant aphid populations have become widespread in the state.

"In soybeans, the insecticide toolbox is just getting increasingly shallow," MacRae warned. "We've lost pyrethroids to resistance and other products have been de-registered. While some newer products work well, we want to keep those around as long as we can." 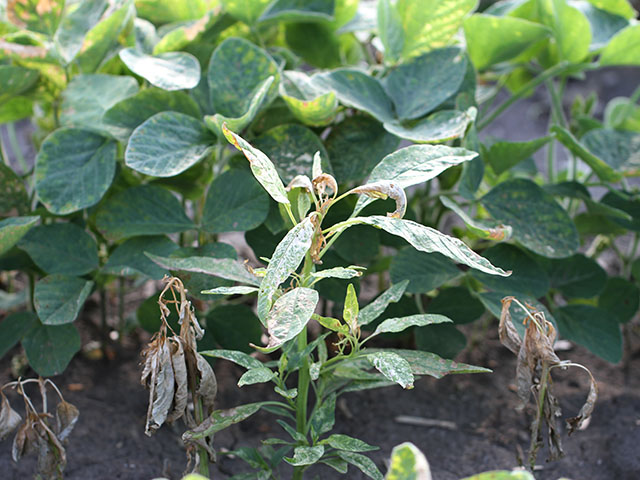