ROCKVILLE, Md. (DTN) -- Knowing your rootworm risk level is about to get easier.

A new website launched Thursday, Corn Rootworm IPM, which includes an interactive map of rootworm sticky trap results, for both northern and western corn rootworms. The map will be populated by cooperators from 12 states and five Canadian provinces, who will report how many rootworm beetles were caught by the small, yellow sticky traps posted in their fields each week.

The goal is to harness the hodgepodge of rootworm monitoring networks on the landscape, from individual farmers to seed companies and universities, and create a single, public source of data for farmers to watch every year, said Iowa State University Extension entomologist Erin Hodgson.

Don't see any data points in your area? There's an easy fix.

"Send us an email and we'll send you some traps!" said Nick Seiter, Extension entomologist with the University of Illinois. The website lists contacts and resources for each state and province here: https://cornrootworm.extension.iastate.edu/…

The website has detailed instructions on how to download and use the survey software. Users can log their sticky trap numbers into the map by phone, tablet or computer. "So you can enter it effortlessly and any user can see it," Hodgson said. Farmers can also email their results to their local university contact to be added to the map, Seiter said.

The new map comes at a key time for many Corn Belt growers, who are poised to see yet another year of increasing rootworm populations, after several years of consistently low populations ushered in by extensive flooding in June 2015 that drowned many larvae in the central U.S.

"That's when Mother Nature pushed the reset button," as Kris Ehler puts it. He's a sales agronomist for Ehler Brothers, an Illinois-based seed and consulting business that started trapping and monitoring rootworms with sticky traps back in 2016. For five years, this trapping network showed low enough populations that Ehler's customers could safely move to higher yielding, less expensive, non-rootworm-traited hybrids.

"But our numbers and the university numbers have all shown a slight increase last year," Ehler cautioned. "And with last winter's average temperatures, there was nothing detrimental to overwintering eggs, so I anticipate another slight increase. So now we need to be very diligent."

Another emerging trend that academics and industry are tracking is the growing number of northern corn rootworms venturing southward deeper into the I-states, Seiter said.

Rotation-resistant northern corn rootworms prefer to wait out crop rotation entirely, by hibernating for an extra year or two or three, before hatching into a field that may have returned to corn, a habit known as "extended diapause."

Knowing which type of rootworm you have in your area is pretty important to management, and of great interest to entomologists, Seiter noted.

"That's a big motivation for us to track changes in population trends over time in addition to just the typical motivation of understanding what your rootworm pressure is like, and whether or not you need a treatment for it," he explained.

See an Iowa State guide on how to distinguish western and northern corn rootworms here: https://crops.extension.iastate.edu/…

Rootworms' best weapon has always been that they do their feeding underground, away from prying human eyes. "Right now is when the larvae are doing their damage," Seiter said of Illinois fields. Their toll often remains hidden until late in the season, when trimmed roots can't hold corn plants upright and combine monitors show a diminished yield.

But there's a key time, starting in early July, when rootworm adults leave their underground bunkers and start buzzing around in the air, looking for mates. That's the time to make your move and start monitoring them, Seiter said.

Growers can plant three to four yellow sticky traps in their field and head out once a week to check them and put up fresh traps. Don't wait much longer than that, because the sticky material will start to degrade after about a week, Seiter warned.

"We recommend trapping for about four weeks, beginning around the second or third week of July to capture peak adult activity," he said. There's a perception among farmers that the corn pollination window coincides with peak rootworm beetle flights, but that's not the case, Hodgson added.

"The peak is far more likely to come at the end of July, even into August," she said. And keep in mind that Bt-resistant rootworms take longer to develop on Bt corn and thus emerge a little bit later than their Bt-susceptible counterparts, which emerge from refuge plants faster.

The later you keep your trapping going, the better you can monitor these more dangerous resistant rootworm population levels, Hodgson explained. "If your peak activity is coming well into August, that's generally not a good sign," she said.

Growers can trap in both cornfields or soybean fields, Seiter added. Trapping in soybean fields can help monitor for the rotation-resistant populations, as well as inform growers of likely future populations in the next year's rotated first-year corn fields.

"You can't look at a beetle's size, color or even DNA and determine if it is a rotation-resistant variant," Seiter explained. "The only way we can assess that is looking for beetles in soybean fields."

KEEPING AN EYE ON RESISTANCE

About 80% to 90% of Ehler's customers have been using non-rootworm-traited corn hybrids for the past four to five years. He's hopeful that should they ever have to switch back to pyramided corn, they will have helped create a local population of Bt-susceptible rootworms.

But on a larger scale, Bt resistance persists. "It's increasing to the point where it's not just little pockets; it's throughout the state," Hodgson explained. "I would say it's safe to assume there is some level of Cry3 resistance in all Iowa cornfields," she added, referring to three related Bt traits, Cry3Bb1 (YieldGard RW), mCry3A (Agrisure RW) and eCry3.1Ab (Agrisure Duracade).

Even more concerning is the rise of western corn rootworm resistance to Cry34/35Ab1 (Herculex RW), which is the underpinning of pyramided rootworm hybrids such as SmartStax, Qrome and Intrasect Xtreme. Western corn rootworms that can survive feeding on this trait have been documented in Iowa, Minnesota and North Dakota, a state where researchers also found the first northern corn rootworms resistant to it.

Bayer is bringing a new rootworm mode of action, SmartStax PRO, to market next year, but use of the trait is limited to small farmer trials this year. The technology uses RNA-interference (RNAi) to shut off production of a key protein in the rootworm. See more here: https://www.dtnpf.com/…

See more the recommended deployment of sticky traps in each field here: https://cornrootworm.extension.iastate.edu/… and watch a video on how to set them up here: https://www.youtube.com/… 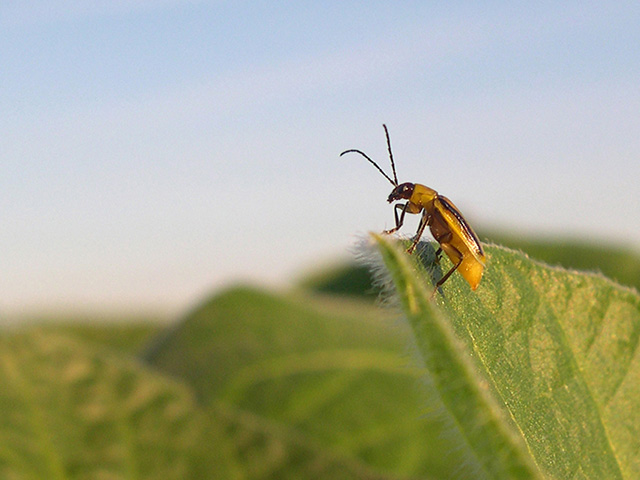