The tour yield estimate is the highest in 19 years and almost certainly the best in the event's 40-plus-year history, according to Kansas Wheat CEO Justin Gilpin. He outlined several reasons for the large crop:

-- Good prices prompted many farmers to closely watch crops for disease pressure, such as rust and wheat streak mosaic and spray fungicides as needed.

"Mother Nature has been good (to hard winter wheat) the last two weeks with rain," Gilpin said. "(The yield estimate) is a testament to the wheat breeders and better genetics.

"However, you may have seen the crop that's as good as it will look," he added. "I'm still concerned about more disease setting in with the wet weather and temperatures in the 80s that are in the forecast."

Kansas is the nation's largest winter wheat producer. The state's farmers planted 7.3 million acres last fall. Harvest, for the most part, will begin next month.

In mid-May, USDA predicted Kansas' hard winter wheat crop at 331 million bushels with an average yield of 48 bpa. Tour scouts estimated the crop at 365 million bushels. Final tour yield projections were also 10 bushels per acre better than the government's estimate for the state.

The tour is normally held at the beginning of the month. Since the crop is more developed now, tour organizers believe the production estimates are more accurate than if they were taken several weeks ago.

The crop is far from made, though.

"The takeaway from the tour is we saw the crop at maximum potential," said Aaron Harries, vice president of research and operations with Kansas Wheat. "But as we always say, everything that happens to the crop from now until harvest is usually bad. Wet weather is in the forecast and wheat doesn't like wet feet."

In 2019, the estimated yield of the three-day tour was 47.2 bpa. Kansas wheat yields averaged 45 bpa in 2019, according to USDA data. The tour uses 2019 yields as a comparison since last year's tour during the pandemic was measured by many fewer scouts.

Wheat continued to look good on Day 3, according to scouts. Some stripe and leaf rust were reported along with wheat streak mosaic virus, but not in amounts that would significantly reduce yields.

First-time tour-goer Josh Longtin thought the hard winter wheat crop looked good overall in fields he assessed. He's a grain merchandiser for Miller Milling based in Minneapolis and found the tour useful for millers and wheat end users to see first-hand the size and quality of the crop to make future purchasing decisions.

Several Kansas and Oklahoma wheat growers attended the tour or invited scouts to their farm.

"It's good to see what region may have issues because we may have to look elsewhere for wheat," Longtin said. "That shouldn't be a problem this year. It's also good to get a better understanding of what growers face and the decisions that went into raising the crop." 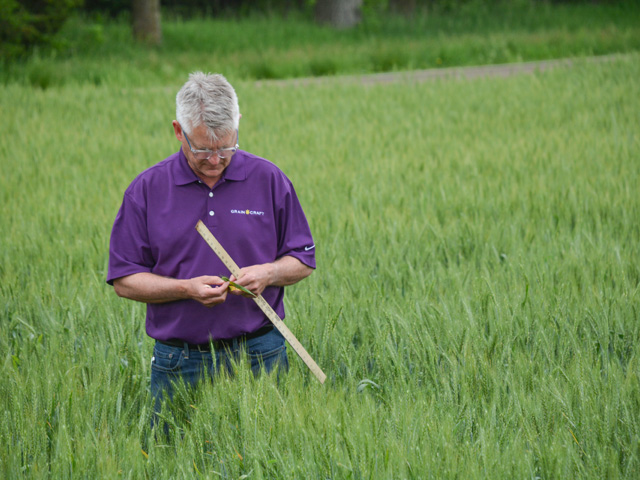