ROCKVILLE, Md. (DTN) -- Planting has raced ahead in the past two weeks, setting records in some parts of the country, but it hasn't always been easy.

Much of the country has faced below-average temperatures, along with two major cold snaps in the past four weeks and a deepening drought emerging in the southern Great Plains.

In the meantime, rural America is starting to feel the long tendrils of the pandemic, as regional death tolls creep upward and local economies grapple with disruptions and unemployment.

"When we got going planting, I was so excited to start being in the tractor for the day," said northeastern Oklahoma farmer Zack Rendel, who started planting a month ago. "Usually, I get the feeling of being on vacation when I'm out there, but then the daily downfalls of COVID-19 and prices and just all the unexpected things that happened really put a damper on my attitude. I have to keep reminding myself these are things beyond my control and to just keep moving."

Rendel is part of the DTN Agronomy Advisers, a group of trusted farmers and ranchers who keep DTN informed on planting progress and current events in agriculture on a monthly basis. The past four weeks have been busy for many, between field prep and planting, but many are also feeling the effects of the regional lockdowns and virus concerns.

With some wheat in the Southern Plains just starting to recover from a brutal mid-April freeze, much of the Midwest is readying for a potentially damaging round of cold temperatures on freshly emerged crop fields.

The timing of the late freeze is especially problematic, as many states have set records in the past two weeks for corn and soybean planting. (See more on the freeze concerns from DTN here: https://www.dtnpf.com/…).

The cold snap follows a below-average temperature trend for the past 30 days for the northern, eastern and southeastern regions of the country. Spooked by the delays of spring 2019, many farmers have rushed into the field nonetheless, with all the Agronomy Advisers from Oklahoma through Minnesota reporting at least some progress.

Fellow southeastern Minnesota farmer Jeff Littrell, who manages ground in western Wisconsin as well, was pleased to see corn hitting the ground so quickly. His organic corn acres need to pollinate at different times from the conventional corn around him, to limit pollen contamination as much as possible. "We like to see a minimum of two weeks between planting," he explained.

Things were also moving fast in Colorado, Iowa, Montana, Oklahoma and Nebraska, aided by dry conditions the past few weeks. Many Iowa farmers were turning to weed control on freshly planted cornfields or tackling burndown in preparation for soybeans, said Mike Berdo, of southeastern Iowa. With most of his crops in the ground, northeastern Colorado farmer Marc Arnusch was scouting for worms and mites. Weed control was top of mind for Oklahoma's Rendel.

Farther south and east, cold and wet conditions were slowing some fieldwork and hampering crop emergence in states such as Illinois, Missouri, Ohio and Maryland.

"Everything is slow due to the lack of growing degree days (GDD)," said Tyler Young, who farms in east-central Illinois. "We are leaning on our seed treatments pretty heavily at the moment." In central Ohio, Keith Peters was also watching early planted soybean fields with some concern, as well as evaluating frost injury to his winter wheat.

Wheat damage was a common lament among Southern Plains growers, as well, after temperatures plunged into the teens and 20s for several consecutive days in mid-April. "We reached 13 and 11 degrees a couple nights in a row, which left the upper leaves of our wheat crop scorched," Arnusch reported. "Recent warm weather has allowed the wheat to grow out of the leaf burns some and we delayed any herbicide applications until the wheat showed signs of recovery."

In northwestern Oklahoma, farmer Kenneth Rose's wheat came through the freeze but the deepening drought in his region dealt a death blow to many continuous wheat fields in the Panhandle, including his own. "In Cimarron County, it is now 127 days without a quarter inch of rain," he reported. "Some summer-fallowed fields still look pretty good but continuous wheat is history. Some have been destroyed, some swathed for hay."

FARMING THROUGH A PANDEMIC

Although many farms remain fairly isolated from the COVID-19 infections and death rates plaguing more populated parts of the country, rural communities are feeling the economic backlash to business lockdowns and localized outbreaks of COVID-19.

In Arnusch's corner of Colorado, infections forced the shutdowns of a nearby meat packing plant and cheese plant. "This all comes back to affect our farm, because 85% of what we grow makes its way into the local beef, dairy and egg market," Arnusch explained.

For some, spiking unemployment has provided unexpected farm workers. Young's brother is a pilot who's been grounded for three months; now he's helping the family fix tile. In southwestern Indiana, Scott Wallis has picked up some part-time help after a local Toyota plant was closed down by COVID-19.

Others have had to remain nimble. In south-central Montana, Michelle Jones had to make some rapid spring acreage switches, after the malt company they work with cut their malt barley contracts across the board by 50%, in the face of plummeting restaurant and brewery demand. "We hadn't seeded yet when they did it, so we just moved some acres to spring wheat, but we're almost certainly going to lose money per acre with spring wheat," Jones noted. "Barley has a far better chance of making a profit -- it's a lower-input crop for us."

While some states and regions are slowly starting to reopen local businesses, some Agronomy Advisers are keeping their distance, especially those who are in the at-risk category for the disease, or who have family members who are. "Missouri has lifted the stay-at-home order, so things are starting to relax," noted north-central Missouri farmer Kyle Samp. "Judging by the increased traffic on the road, the public had already decided it was over. My family is still trying to be cautious for now."

In Ohio, Peters is trying to stay prepared with a farm contingency plan. "COVID-19 is a long-term worry now," he said. "I've laid out plans for where I want varieties planted, chemical placement and side dress recommendations, in case I get sick."

Low commodity prices remain a major concern for growers, not only for their bottom line, but for their region's economic health.

"If corn stays sub $3 and soybeans nearing $8, that is below cost of production for a high percentage of the farms, including ours," Nowak noted. "This will impact the financial underpinnings of rural America."

Illinois' Young agreed, noting that after the local hospital, ag manufacturing, processors, grain elevators, dealerships, and ethanol plants make up the bulk of his local economy. "Farm ground is 40% of our local tax revenue," Young added.

Other famers are starting to eye alternative crop markets, in the face of low commodity prices and falling demand for ethanol. "I have already planted a couple alternate crops and am still considering a few more for this year to offset the loss of corn demand," said west-central Minnesota farmer Justin Honebrink, adding that specialty crops or hay are at the top of his list.

Honebrink and others still remain bullish on farming, though.

"I think there is an opportunity to make things work out yet and excel, it is just going to look much different than it has the past few years," he said. "It is going to take a little time to figure out what the new normal looks like, and hopefully I can do it soon." 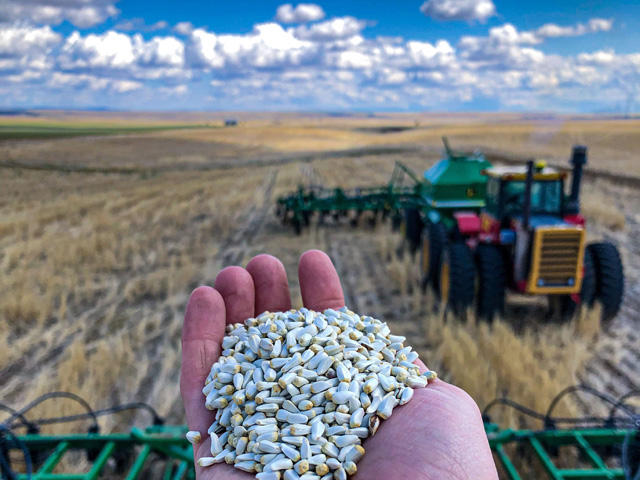