USDA's Animal and Plant Health Inspection Service (APHIS) received a petition from Monsanto (now a legal entity owned by Bayer) to deregulate the new GM corn trait, called MON 87429, last spring, so the company can use it for hybrid seed production. After reviewing comments from the public, the agency announced its next step this week: the launch of an environmental impact review for the new trait.

"In reviewing the public comments and information received during and after the comment period on Bayer's petition, APHIS concluded that an environmental impact statement is necessary to assess the potential impacts to the environment from deregulating MON 87429 maize," the agency said in its news release.

The new five-way trait would replace Bayer's development of XtendFlex corn, a three-way trait that tolerates dicamba, glufosinate and glyphosate and was deregulated by USDA in 2016. The company is still waiting on EPA to approve use of current dicamba herbicides on XtendFlex corn, so it isn't yet commercialized. In the interim, Bayer has been working on this new, five-way traited corn, which it calls HT4, and is re-focusing much of its research efforts there.

"Pending regulatory approvals and other factors, we anticipate a commercial launch of our HT4 corn product mid-to-late this decade," the statement added.

The new corn stack would allow postemergence use of all five herbicides, but Bayer's petition claims it won't change corn herbicide use, largely because this particular petition for deregulation is only for hybrid seed production. As a result, the company didn't have to create estimates for how many acres might be planted to commercialized corn plants sporting MON 87429 yet.

Bayer also stated that the new, five-way stack will not require different label rates or spray windows in corn from those already established for current glyphosate, glufosinate, quizalofop and 2,4-D herbicides.

Dicamba is the exception to that. In its petition for deregulation, Bayer states that the five-way traited corn would use the same application timing (through the V8 growth stage) and rates of dicamba (up to 2 pounds of dicamba acid equivalent per year) as that XtendFlex corn trait, which USDA has already reviewed and deregulated. However, those expanded spray windows and rates for dicamba use in corn have not yet been approved by EPA, which governs pesticide use, and are not in use on the landscape yet.

As a result, Bayer acknowledges that dicamba-tolerant technology in corn could expand dicamba use in corn. Specifically, in regulatory documents for XtendFlex corn, Bayer estimated that once fully commercialized, dicamba-tolerant corn could eventually be planted on 89% of all U.S. corn acres, with up to 36% of all corn acres receiving a dicamba application.

However, the company has underestimated use of its dicamba-tolerant cotton and soybean acres to USDA in the past. Environmental activist groups such as the Center for Food Safety argue dicamba use will be higher than suggested for dicamba-tolerant corn. These groups are lobbying for USDA to reject the petition, which received more than 4,100 public comments when it was posted last May.

"(Bayer/)Monsanto's petition to approve a new GM corn variety resistant to five herbicides, including dicamba, is beyond the pale," Bill Freese, science director for the Center for Food Safety said in an email to DTN. "The company's dicamba-resistant soybeans and cotton have already had devastating impacts on American agriculture, with rampant dicamba drift causing unprecedented injury to millions of acres of soybean, orchards, vegetable farms and trees throughout rural America, and this new GM corn would make things immeasurably worse."

See the petition for deregulation of Bayer's five-way herbicide-tolerant corn trait, MON 87429 and USDA's most recent actions on it here: https://www.regulations.gov/…. 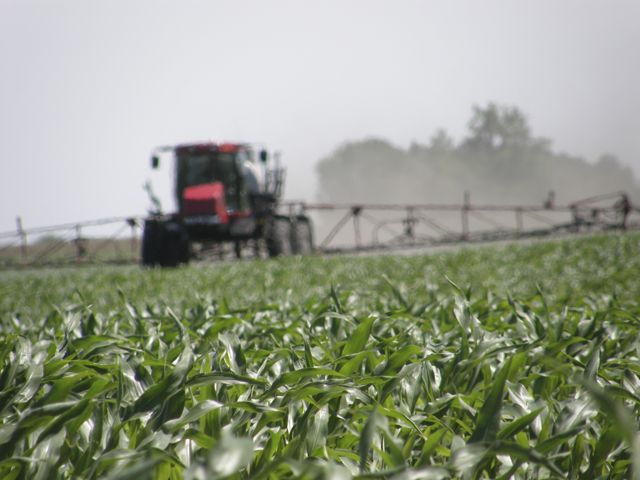