ROCKVILLE, Md. (DTN) -- Weed scientists are officially confirming the presence of dicamba-resistant Palmer amaranth in Tennessee, where the dicamba-tolerant Xtend trait has dominated cotton and soybean acreage for several years.

Scientists at the University of Tennessee, the University of Arkansas and Texas Tech University have finished greenhouse trials and replicated field trials on Palmer amaranth populations collected from fields in several Tennessee counties, including Crockett, Gibson, Madison, Shelby and Warren.

"It's official," said University of Tennessee Extension weed scientist Larry Steckel. "We have resistance to dicamba, and some preliminary results suggest tolerance to 2,4-D is tagging along, too."

But this is the first case of dicamba-resistant pigweed populations being widespread enough to disrupt farmers' operations and force a change in their weed management, Steckel said.

"I've talked with a number of farmers who have had to spray pigweed three, even four times," he said. "It's getting expensive -- up to $60 just on postemergence applications -- just trying to take out these weeds."

The confirmation of dicamba-resistant pigweed is not a surprise; DTN has written about the growing trend of Palmer amaranth surviving dicamba applications in the South multiple times in the past two years. See the most recent here: https://www.dtnpf.com/….

Nor is Tennessee an anomaly. University of Arkansas weed scientists are seeing a similar trend of Palmer amaranth starting to escape labeled rates of dicamba and other herbicides, such as 2,4-D and glufosinate. Midwest scientists are documenting waterhemp dicamba escapes, as well.

For now, the dicamba resistance levels Steckel and others have documented are categorized as low, around 2.5X. That means the weeds can survive up to 2.5 times the labeled rates of dicamba.

"We've seen this play before," Steckel warned. "It's comparable to 2006 when scientists first documented glyphosate-resistant Palmer amaranth. It was at that lower level, and after a couple years of farmers bumping up their rates to try to control it, we were at 8X levels of resistance."

Growers are also facing regulatory uncertainty with dicamba use, after a federal court vacated three of the four dicamba herbicides designed for use in Xtend crops in early June. New registrations are underway, but EPA hasn't provided any insights on what new labels would look like or when they would be issued. See more here: https://www.dtnpf.com/….

The confirmation of dicamba-resistant pigweed is another blow to the reliability of the Xtend system for Midsouth growers, Steckel said.

"It means Liberty [glufosinate] will become the most important part of the Xtend and Enlist weed control systems," he said. Growers of Enlist cotton and soybeans can spray both Enlist One (2,4-D-choline) and glufosinate postemergence, a combination that still seems to be working on dicamba-resistant populations, Steckel noted.

Given that he has documented Tennessee Palmer amaranth populations that are only 50% to 60% controlled by 2,4-D alone, that tank mix is crucial, he added. "In my opinion, Enlist One should never go out by itself ever again," he said. "It needs to be tank mixed with Liberty, to try to protect both chemicals."

Pending import approvals, Bayer is hoping to commercialize XtendFlex soybeans in 2021, which will also tolerate postemergence applications of glufosinate, as well as dicamba and glyphosate.

The situation is putting immense pressure on glufosinate, which has a long history of use in the Midsouth.

In Arkansas, Extension weed scientist Tom Barber has reported a growing number of cases where weeds are escaping glufosinate applications, in addition to the problems emerging with dicamba and 2,4-D.

“After walking fields last week and visiting with Larry Steckel this week, it is evident that we are about to run out of chemical options for pigweed control in the north Delta region,” Barber wrote in a university article. “Growers should take all precautions necessary in suspect fields to remove these populations prior to seed production.” See more here: http://www.arkansas-crops.com/…. 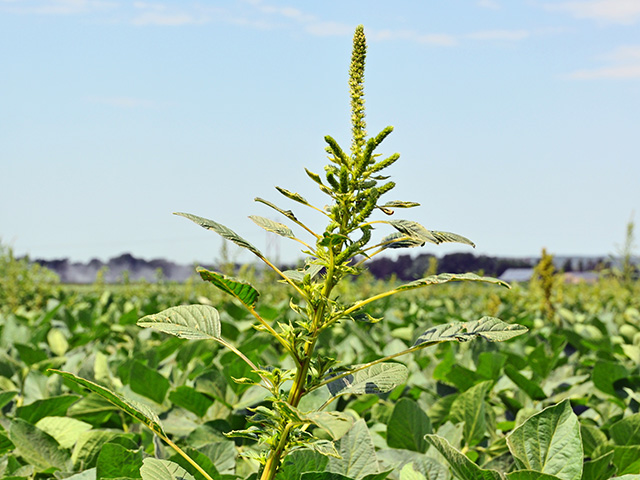